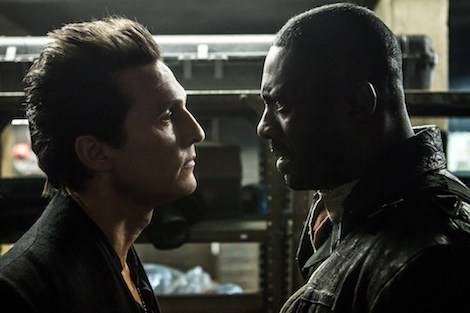 The first The Dark Tower trailer released only a month ago, but now we have two new Dark Tower teasers. Mostly, both contain scenes from the first trailer.

This one has the most new stuff.

I like the more western feel here, with the eerie whistling, the classic western landscape with Roland, though I still think Roland’s clothes look way too neat and clean. Oh, and I know book fans did not miss the All Hail the Crimson King graffiti (also in the first trailer). The opening shot with the Man in Black striding across the wintry field full of dead bodies reminds me of Game of Thrones — not necessarily in a good way — but of the two, I like this teaser the best.

With this one we get that wonderful Roland dialogue, which we also heard in the trailer. And it shows the same scene with Roland turning his head and shooting the fleeing man without looking at him. In fact, all in all this is a shooting frenzy teaser. Roland’s reaching for his gun, Roland’s whipping his gun out of his long trench coat, Roland’s reloading his gun with shells flying through the air. In fact, Roland reloads his gone like three times. I must admit, I find all the gun stuff boring, which might seem weird since I love The Dark Tower series. But hey, my SO thinks the gun stuff is cool, so tastes differ.

I missed Jake in the teasers — Jake and Oy are my favorite characters from the series — but I’m sure we’ll see more of Jake in teasers to come.

What do you think of the teasers?