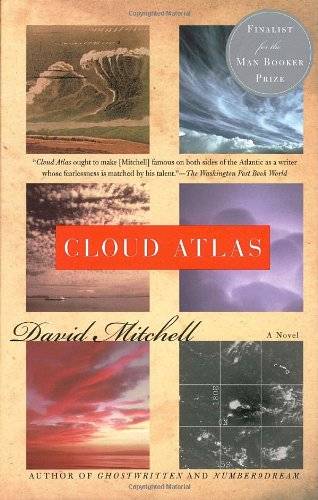 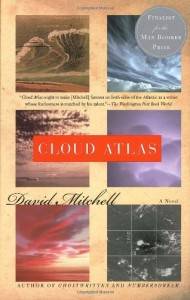 David Mitchell’s novel Cloud Atlas is one of those books you love all the more because the worlds it depicts stretch far beyond what you can imagine on screen. Of all Mitchell’s novels, this one seems to be the most un-film-able. Perhaps that was an irresistible dare to the directors? They’ve finished shooting and plan a release date in October 2012.

Cloud Atlas’s nesting-doll structure splits five out of six stories, fitting them around a central, far-future narrative. The bigger challenge for film, though, is the range of time and place. Mitchell leapfrogs from a 19th-century schooner on the Pacific to a Belgian estate in 1931 to a nuclear reactor in 1970s California to a quasi-contemporary British nursing home to a 21st-century Korean corporate-theocracy to a post-apocalyptic Hawaiian island. The film tackles all of these stories, but one early report described the directors’ approach as “linear,” so they’ve likely jettisoned that nesting-doll structure.

Each tale has a racing tempo, as the main characters rush or grope towards a rescue—trying to free themselves, their communities, knowledge, beauty, mankind. These protagonists share a questing nature, a search for truth. My eyebrow rises at the thought of cramming all the core plots and character development into less than three hours of screen time. Those characters also need to evoke their shared spirit. As one post-apocalyptic tribesman puts it, “souls cross ages like clouds cross skies.”

Unlike Dragon Tattoo, Mitchell’s novel has both style and substance. Luckily, much of the language can be put in the characters’ mouths, like Robert Frobisher’s hilariously baroque riffs or Sonmi’s description of a clone-clogged future, which is already in dialogue form.

But even the dialogue-heavy sections can’t write themselves. Mitchell turned down an early offer to turn his novel into a screenplay. He did urge the writer/directors to freely adapt his work and reviewed their drafts, saying that he’s “cautiously optimistic about the film.”

This could be a brilliant experiment or a trifecta of trash. Three writer/directors share the project: Tom Tykwer plus siblings Lana and Andy Wachowski. The Wachowskis pounced in 2005, when Natalie Portman gave Larry Wachowski (now Lana) a copy of the novel. The Wachowskis then pulled in their friend Tykwer and together, they spent a couple of years hashing out the screenplay.

Tag-teaming the direction is another critter altogether. The Wachowskis directed one unit while Tykwer simultaneously directed the other. This allowed them to use the actors back-to-back in various sections, saving time and, ostensibly, money while operating with two entire crews. A globe-spanning finance package means that they have more creative control than they would in a traditional, studio-backed production. But a $100 million budget and creative autonomy may not be a good combination here. I sense they’re creating a platinum-coated dog’s breakfast.

Quick recap: the Wachowskis wrote and directed the Matrix trilogy, which started with a hit and then sagged with each following release. I think about The Matrix: Reloaded’s squirmingly awful quasi-pagan rave scene and seriously fear for the post-apocalyptic tribal section of Cloud Atlas. But at least they launched with something popular, based on their original ideas and script.

The Wachowskis then wrote and directed V for Vendetta and Speed Racer, both based on previous works, both stinkers. (Speed Racer lost over $100 million net.) Their films have steadily gotten blander and flatter, like stale fast-food pancakes. Throwing money at them doesn’t help.

Tykwer wrote and directed Run Lola Run, released back in 1998. So far that’s his only real hit. The International (2009) didn’t generate heat despite Clive Owen—and how do you hide that man under a bushel of blah?! Tykwer’s previous attempt at adapting a novel resulted in Perfume: The Story of a Murderer (2006). Good actors but the script was a mess.

The Wachowskis are notoriously tight-lipped about their projects, so it’s not yet clear who directed which of the Atlas stories. Best guess is that the Wachowskis tackled the futuristic narratives while Tykwer shot the past- and present-day sections.

Tykwer can do kinetic action sequences and capture tension between individuals. The Wachowskis gravitate to the splashy and vast. Getting their different aesthetics to mesh into one cohesive film is a tall order.

Several razzle-dazzle names but many of them are hungry for a hit. Confirmed stars include Halle Berry, Hugh Grant, Tom Hanks, Susan Sarandon, Hugo Weaving, Ben Whishaw, Jim Broadbent, and Jim Sturgess. All play multiple roles in multiple sections, switching genders, ages, and races. (Is it crass to wonder if Larry/Lana Wachowski had a special interest in that cross-pollination?)

Details have been slow to trickle out, but a few headliners have described the challenges of playing so many wildly different roles back-to-back. Berry, for instance, said it was tough to flip between characters and film crews on a day-to-day basis. (She plays the 1970s reporter Luisa Rey, wisewoman-of-the-future Meronym, and a Belgian Jew.)

Last week, Grant revealed that he plays six villains, a stretch for the rom-com veteran. “I am suddenly standing in a cannibal skirt on a mountaintop,” he confessed, “and I am thinking, ‘I can’t do that! Just give me a witty line!'” Methinks his self-consciousness might show through all the makeup. Hanks joins him in the bad-guy corner, as he’s reportedly in the role of suspicious surgeon Henry Goose. High time Hanks plays somebody with bite.

One encouraging bit of casting: Ben Whishaw as sly and sexy composer Robert Frobisher. As he’s shown in The Hour and Bright Star, Whishaw can ripple out lines with the best of them. He also divulged that his smaller roles include a woman in the Luisa Rey story and a person in a nursing home.

Sarandon’s been harder to pin down, but I’m picturing her as Mrs. Crommelynck, purring at Whishaw’s Frobisher. Sturgess, though? He’s about as substantial as a damp tissue.

In the plus column, all three directors have worked with several of these actors before. The Wachowskis, for instance, used Sarandon in Speed Racer (and she’s still talking to them) and Weaving in Matrix. Tykwer gave Whishaw his first leading film role in Perfume. And the film will introduce some great Asian actors to a wider US audience, including Chinese star Zhou Xun and Korean actress Bae Doona as the heartbreaking fabricant Sonmi~451.

In spring 2010, reports surfaced that both Arianna Huffington and Jesse Ventura had filmed cameos for an unspecified Wachowski project. They wore rainbow-colored dreadlocks and getups that Ventura compared to John Travolta’s crusty look in Battlefield: Earth. For a ghastly moment, those improvised cameos were rumored to be part of Cloud Atlas. Now they’re said to be part of the Wachowskis’ futuristic Iraq-war movie, but still. A rainbow connection with HuffPuff does not inspire confidence.

Some great actors, but low expectations for the script and roughly half the known cast. Can Catwoman be flexible enough for the multiple roles? Can the directors agree on an edit?  Will the Wachowskis focus on people rather than sci-fi sets? The forecast is gloomy, with a falling barometer.