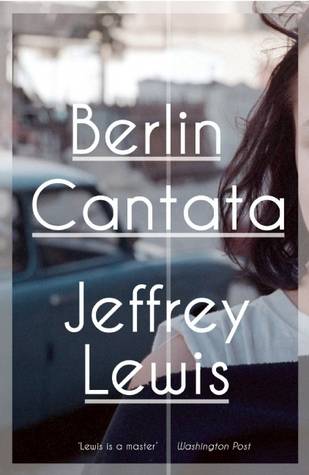 Jeffrey Lewis is the author of Berlin Cantata (Haus Publishing), a “polyphonic novel” about the city after the Wall fell, told through thirteen voices. Lewis used his experiences as a Manhattan assistant D.A. in his contributions to the landmark TV series Hill Street Blues. After some years writing screenplays, he turned to fiction; Meritocracy: A Love Story won the ForeWord Magazine Book of the Year Silver Award for fiction and the Independent Publishers Award for Fiction. Adam the King (2008) received starred reviews in Publishers Weekly and Library Journal, as well as a four-star review in People magazine. Lewis lives with his wife, the painter Gayle Lewis, in Los Angeles and Castine, Maine.

BOOK RIOT: What are you reading now?

JEFFREY LEWIS: My own Berlin Cantata, seemingly over and over, trying to figure out what I’m going to read from it when I go to Berlin. Other than that: Peter Englund’s fine The Beauty and the Sorrow, a collection of first person accounts of the Great War from nearly every conceivable point of view; and my friend Peter Behrens’ The O’Briens.

JL: Remembrance of Things Past, for probably every reason anyone’s ever cited, language, characters, analysis of society, insight into nature of time and creativity, but most of all, I think, for Proust’s sensitivity. How come I’m not that sensitive, and never will be?

JL: The Man Without Qualities. I recommend this mostly because so few people have read it. And because I think Musil’s descriptions of the movements of the human mind are uniquely powerful and trenchant. He was writing at the same time as Freud, and from the same Viennese background, yet his insights seem to me different, and at least equally compelling. It’s also a novel about a lost empire which hardly anyone knows anything about but which was, at minimum, more tolerant and humane, if more decadent, than the virulent nationalisms that replaced it.

BR: Tell us about your reading routine when you’re working on a book.

JL: Mostly I read history. Only occasionally fiction, because of the old fears of being too influenced, or too distracted, or too intimidated. Anyway, I love history. Nothing like Gibbon’s prose to perk you up; nothing like reading about the vanities of the dead to make you remember the basics.

BR: What do you read as a “palate cleanser,” i.e., which books always help you switch from a long spate of reading, say, serious biographies?

JL: It’s a great idea, a “palate cleanser.” But I don’t know that I’ve ever had one. Maybe the book reviews–TLS, New York Review of Books, London Review of Books. They’re like intermezzos, and like coming back to the world, keeping up with it, being in it, like calling up your friends after you’ve been away.

BR: Has a book (or books) ever disappointed you?

JL: Whatever I’ve read by Philip Roth after An American Tragedy. It was so alive and deeply felt, deeply compassionate, and by comparison what I’ve read after seems a little slight and sour. Though I could be wrong, I haven’t read everything.

BR: Which book would you bring on a desert island?

JL: I’m tempted to say any book in which would be hidden a rocket-propelled device that could shoot flares high into the atmosphere, attracting the notice of any boats or UFO investigators within a thousand miles. Failing that, a one volume Shakespeare. You may see a motive of economy here. One volume, packed. It would keep me going for a long while.

BRL Do you re-read books? If so, are there any you re-read regularly? Any that have changed significantly for you over the years?

JL: Yes. Books I read when I was young I sometimes read now, and typically feel that I finally understand why I was supposed to be reading them in the first place. Homer, for instance. To me as a ninth or tenth grader, The Odyssey seemed like a big budget movie, but sadly lacking the stars or the Technicolor. I couldn’t feel the great issues. It was like I was reading it so that someday it would click in, make sense, the way they say it’s good to memorize poetry when you’re young. And I think it is. I never did, but I think it is. Someday things do click in. There aren’t any books that I re-read regularly. I’m too slow a reader. I’d never get around to reading anything else.

BR: Do you finish every book you read, or do you stop at a certain point?

I usually finish. The most likely reason for me to stop: a book is so dense that I’m totally lost in it–at the moment, I’ve at least temporarily stopped Hermann Broch’s The Death of Virgil, though I’ll probably get back to it, as it’s said to be wonderful–or it seems like an impossible labor with little likelihood of the clouds breaking.

BR: Are there any authors whose books you eagerly anticipate?

JL: Actually, no. Most of my favorite authors are dead. What I eagerly anticipate is something of theirs that I haven’t gotten to yet. Also, books highly recommended by certain friends, e.g., recently, The Hare with Amber Eyes. Or books I find recommended in unusual places, so that I think I’ve “discovered” them. Example: a book I read about somewhere online that, seemingly reliably, traces the AIDS epidemic to the meat shot and consumed by white bush hunters in Central Western Africa in the 1920s.