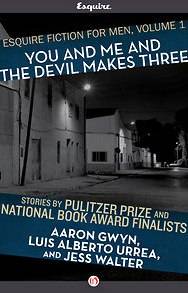 In The Useful Illusion of “Fiction for Men,” Jeff makes the case that Esquire’s new publishing venture, a sort of short story anthology curated by the magazine’s gatekeepers that will be offered as an ebook, is a good idea, and the illusion of “men’s fiction” is more just a way to delineate audience and market fiction than anything else.

I beg to differ. “Fiction for the readers of Esquire” was too long? Or “Esquire Fiction” was too, um, specific?

The label “Fiction for Men” is not only needlessly divisive, it reinforces harmful gender stereotypes and, in fact, creates new literary stereotypes we don’t need.

Esquire sets out to define “Men’s Fiction” as “plot-driven and exciting, where one thing happens after another, and also at the same time, dealing with passages in a man’s life that seem common.” So what, then, is women’s fiction? Character-driven and unexciting, where things occasionally happen?

By labeling something “Men’s Fiction,” they are clearly stating this is the stuff men read. This label won’t stop female readers. Women are used to defying gender stereotypes and doing what they want regardless of whether it’s considered masculine or feminine. Ask any woman who was called a tomboy because she didn’t conform to the sugar and spice and everything nice bullshit, she knows that she can’t let the labels hold her back from what she wants to do.

Want to know why this is? Because being called a boy or a man is considered okay regardless of gender. It’s a good, strong thing. It’s being a girl that is the worst thing ever. Throwing like a girl. Crying like a girl. The biggest insult you can hurl at a man is telling him he does anything like a girl.

Now we’re going to add reading like a girl to that list of awful, horrible, girlie things a man might do to emasculate himself. Ask yourself this, how often do your well-read male friends read books by women? Once or twice a year?

Not only are we reinforcing and creating more gender stereotypes, we’re providing men another venue with which to showcase their writing. Because apparently the entirety of the publishing world was not enough.

The VIDA stats have shown us publishing’s huge gender bias, and that men are consistently reviewed and published much more than women. Publishing is already a boys’ club; do we really need another “no girls allowed” area? Perhaps Esquire has every intention of publishing female authors, but I doubt it. Even in the little press release The New York Times ran, seven authors were mentioned, and all of them were men.

If you’re a man, you probably see nothing wrong with “Men’s Fiction.” After all, as Jeff says, it’s only an illusion by which to talk about the audience for a certain kind of fiction. There is no harm in that. Of course not, if you are a man, especially a white man, where you walk around in a world that has been designed for you, a world that consistently reinforces that your ideas, your habits, your way of being is the right way, the best way, the one true way, “Men’s Fiction” is just a label.

But for people who walk around in a world where they are consistently told that they are less than, that their ideas, and habits, and way of being is not the right way, the best way, or the one true way, the label “Men’s fiction” is insulting, hurtful, and infuriating. It’s just another reminder that your point of view, your ideas, your stories are not welcome.