To celebrate Book Riot’s  first birthday on Monday, we’re running our best 50 posts from our first year this week. Click here for the running list. This post originally ran April 15, 2012.

One of the many many things I like about The Simpsons is that there isn’t any single character that the writers want you to sympathize with. Certainly not Homer, the dopish but lovable star of the show. Certainly not the put-upon Marge, or the delinquent Bart. If anyone comes close to being the character that you see yourself in, it has to be the bookish Lisa. Being a reader in a television nation, I’m sure you can identify with Lisa’s outsider nerdiness. And not only does she read a lot, she has great taste in literature! We should all take a cue from Lisa Simpson and start a reading list based solely on the wonderful books that she reads on the show. The hard part is just compiling it all. 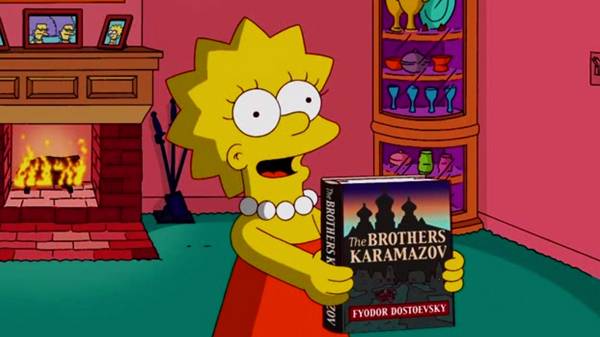 Lucky for us, someone has starting doing that already! A tumblr called The Lisa Simpson Book Club has been up and running for a while, and its goal is to compile all the books and magazines that Lisa has been seen reading in every Simpsons episode. Along with the reading list, they also post funny bookish stills from the show.

The Adventures of Tin Tin, Hergé

The Master of the Senate, Robert Caro

The poems of Emily Dickinson

The works of Jane Austen

The Rise and Fall of the Third Reich, William L. Shirer

The poems of Robert Pinsky

The work of Joyce Carol Oates

The work of Gore Vidal

The work of Tom Wolfe

The New Republic for Kids

So there you are! A Lisa Simpson reading list. It’s like your own pop-culture Great Books program. Enjoy!