Note: Three out of the four comics mentioned here are series, either ongoing or completed. I’ve mentioned their volume numbers and am talking about the series as a whole, not just individual books. 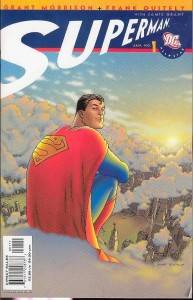 All-Star Superman, vol. 1 & 2 by Grant Morrison & Frank Quitely (DC Comics): The fact that this is on my list as a buy! surprises no one more than myself. Anyone who’s around me for any chunk of time without option of escape is inevitably doomed to listen to me complain about superhero comics (and, lately, superhero films). I’m ceaselessly critical about them, and the reason is that I really love superhero stories. I just wish they weren’t so often dim-witted and repetitive. This superhero comic, though, I adored. It’s a sprawling series of vaguely-connected adventures of Superman, drawn in Frank Quitely’s fascinating style, which gives scenes almost a three-dimensional effect and makes characters feel fleshy and covered in cloth rather than like drawings. Grant Morrison’s writing is brilliant here. He understands that Superman has to be challenged with cleverness, not bigger and bigger enemies to punch in the face. Superman works like the Doctor on Doctor Who. You have to work around how powerful he is, or the story collapses. The comic is fun, imaginative, silly, and the best look at Superman since Alan Moore’s Supreme: Story of the Year, and that’s high praise from me. 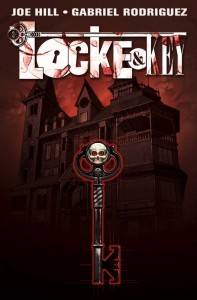 Locke & Key, vol. 1 – 4  by Joe Hill & Gabriel Rodriguez (IDW Comics): Locke & Key seems like it has a simple plot: In and around the Keyhouse, there are a variety of magic keys which can allow you to become huge, put things inside your head, become a ghost, become a sparrow, and a million other things. There is a bad man who wishes to do bad things with these keys. Happily, that barely scratches the surface of what this series has going on. The cast of characters is gigantic and brilliantly written; the history of the people and the house and the area is vast and deep and complex. The artwork by Gabriel Rodriguez seems odd at first – as if it’s more cartoonish than it should be – but within a page of reading, it stops seeming odd and starts seeming perfect to the story and indispensible. This would be a vastly different comic with anyone else drawing it.

There are many joys in this series. One is that there are stand-alone stories happening here and there throughout, and there are characters whose arcs have little to do with the mysteries of the Keyhouse. It makes the series feel roomy, like there’s space inside for the creators to stretch their legs and play, which is brilliant. Another joy is that the series demands re-reading. I don’t know how many times I’ve read and re-read the first four volumes, and I still notice little details, small nuances, elements that tie into the series, or simply tie one piece of dialogue together with one piece of artwork. Even if you don’t like comics, it’s a must-read, and if you say otherwise, then I worry about why you hate life so much. 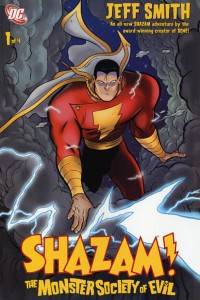 Shazam! Monster Society of Evil by Jeff Smith (DC Comics): That title tells you an awful lot about this slim comic and what kind of silliness you can expect. This is a story of Captain Marvel, and it’s done by Jeff Smith, of Bone fame, his first new comic since completing that behemoth series. Smith brings his same cartoonish, Walt-Kelly-esque artwork to bear on a superhero story, which he refuses to take very seriously at all. It’s glorious, touching, funny, goofy, and action-packed, and it is the second item on this list which is a superhero comic I’ve fallen in love with, and that gives me some hope (it’s why I keep reading some of them, even as I do nothing but kvetch about ’em). Best of all, this one’s entirely kid-friendly. My oldest child can’t quite read yet, but he loves parsing out stories with comic art. He read this one cover to cover with the seriousness normally reserved for bomb technicians. What better recommendation is there than the undivided attention of a five-year-old? 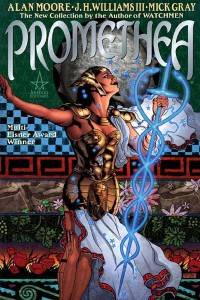 Promethea, vol. 1 – 5  by Alan Moore & J.H. Williams III (America’s Best Comics): This is an older series now, but it’s one I’ve just recently gotten my hands on, and it blew me away in every possible fashion. How do I even describe the plot to you? Promethea is a Wonder Woman-like superhero, I guess. She’s also a creature made of myth, brought to life by story and art. But in addition to a superhero story, it’s also a gigantic thesis on magic and creative thought, an exploration of incredibly complex ideas…and it’s also got a lot of playing in it, but on such a high-minded level, it’s jaw-dropping and exhausting to read.

Alan Moore pushed the comic form harder than anyone else had with this series, and none of it would have worked even a little bit if J.H. Williams wasn’t such a skilled and incredibly varied artist. There was nothing he couldn’t handle: from the painted parts, to the photographic parts, to the gritty superhero fights, to the gigantic repeating frise of a last issue, which unfolded into a poster and which would repeat infinitely, if you bought more last-issues and unfolded them and laid them altogether. It wasn’t a long series, but I read it very slowly and was left exhausted after having done so. Not a good place for a newcomer to comics to start…but it might be one of the great mountain peaks of the comic medium. The Everest of comics, perhaps.

VERDICT: Borrow (and then, if you fall in love with it and find returning it unbearable, go Buy.)