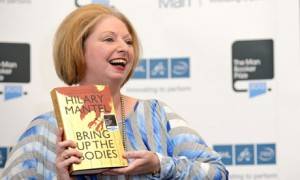 And just like that, Hilary Mantel became a national treasure. To win one Man Booker Prize is fortunate, to win two is to be anointed.

On Wednesday morning, when the attendees of the Guildhall prize dinner were nursing their groggy heads, there she was, her moon-like face beaming out from the front page of the Daily Telegraph, Times, and Guardian. She cooed from the nation’s radios over breakfast. For several hours she was the main picture on the BBC news website, before the chill news winds of the economy, drug cheats, and tawdry abuse scandals blew in.

It is a rare and wonderful thing for a writer to be front-page news. Rarer still for the news to be about celebrating something they have written. Let’s leave authors receiving death threats, head-spinning advances, or legal action for another day.

Yes, the Booker winner generates a lot of coverage each year, but for many reasons Mantel’s triumph felt akin to Usain Bolt’s 100 metre victory in successive Olympics. Just as Bolt ran into the sporting pantheon in London, this double victory made her Britain’s greatest living writer.

If you have read either Wolf Hall or Bring Up The Bodies, Mantel’s twin Booker winners, you will know why.

As the New Yorker rightly noted in its magnificent profile of her, she has saved the reputations of both historical fiction and Thomas Cromwell, Henry VIII’s fixer and the central figure of both books.

Mantel’s trick is she doesn’t treat the past as a foreign country. It is like now, but with terrible mobile phone signals. Society’s aesthetics may change, but its mechanics of pettiness, intrigue, jealousy, lust remain the same. There is nothing new under the sun.

And so, we get to know Cromwell as intimately as any literary character in recent memory. Only David Peace’s rendering of football manager Brian Clough in The Damned United comes close. Cromwell’s internal life is etched with such immediacy that even though we know his fate (he gets the chop, dear reader), Mantel convinces us that his history, and with it the past 450 years, is not set. She trains a telephoto lens on the past. Everything is collapsed into one delicious present.

In announcing the winner of the Booker, the judges likened Mantel’s Cromwell to Don Corleone from The Godfather. I would venture that he is more of a proto-Don Draper. A blacksmith’s son, born into poverty, Cromwell leaves his native land to fight in a war, reinvents himself abroad, returns home and winds his way into power because he can see angles that others cannot. Both are able to sell men their dreams, be it paradise via a pack of Lucky Strikes or absolution via a new national church. The only difference is the hairstyle.

But I digress. Mantel is worthy of her celebrated status. After illness, familial dysfunction, and communing with ghosts, it is the least she deserves. Plus it is nice to see a woman smash the McEwan-Barnes-Amis old boys club of UK literature.

As for the upcoming third part of her Cromwell trilogy, The Mirror and The Light, no pressure Hilary. No pressure.