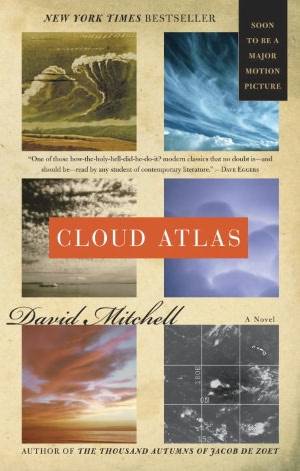 If all you know about David Mitchell and Cloud Atlas is what you’ve seen in the epically long trailers for the film coming out today, fret not! We didn’t know anything, either. After years of being told how amazing and intricate and layered (insert stories-like-nesting-dolls reference here) the book is, we decided to find out for ourselves. And we decided to do it together because reading a new-to-you author’s Big Famous Book for the first time is exponentially more fun (and less intimidating) when you follow the buddy system.

Rebecca Joines Schinsky: Greg, let’s start out with something fun. If you had to guess what this book would be about, before you ever opened the cover, what would you have said?

Greg Zimmerman: I had no earthly idea, frankly. I’d heard about the “nested stories,” and even that some of them stopped in the middle of a sentence. Sounds irksome, I remember thinking. So the book has sat on my shelf for years. But then all the buzz started this summer, and I saw the trailer for the film several times, and then read this WONDERFUL New Yorker story about the Wachowskis…and I still had no earthly idea what it was about. Souls and memories and stuff, I guess. But I’m definitely less intimidated now. So let’s do this! I’m amped!

Whoa, slow start. Are these first few sections supposed to be like a freshman weed-out class?

RJS: Feels that way, doesn’t it? I’m sure as shit glad that so many people warned me about the slow start, because I’m not sure I’d have stuck with Mitchell if I hadn’t known that. And to think I didn’t really believe them! (“Oh, it’s just that people always think literary fiction is slow,” I told myself.)

I dig the journal entry style of the opening, and the epistolary format of the second section, though, and it’s pretty cool that each section is basically a different genre. Now that I know that I won’t know what to expect with each chapter, I’m kinda into it.

GZ: Ditto! So I’m past the halfway point — up the mountain, and peering over the precipice to head back down, so to speak. Let’s take a quick summary break, eh? There are six stories, and each connects to the one prior (and the others, sometimes). Each is set in a different period in time and different setting (Belgian countryside in the 1930s, California in the 1970s, a weird Korean future, etc.), and told in a different style (eg., the epistolary format you mentioned, an interview, an article), and Mitchell drops you in Quantum Leap-style and gives you just enough clues as the story unfolds to figure out time and place.

So then it’s your mission as the reader to figure out, beyond the obvious (like the main character of one section being the person the letters in the previous section are written to), how each section connects to the others. Common themes? Leitmotifs? Dreams?

That may sound challenging, but it’s not. It’s a lot of fun to be a literary detective (*groan,* I know)! What’re you thinking, now halfway in?

RJS: I feel like I’m on a long date with David Mitchell, and it’s going well, but I’m still trying to decide if I want to invite him up at the end of the night.

I adore and appreciate it when authors trust their readers’ intelligence and don’t make it too easy to figure everything out, so I’m thoroughly enjoying the sleuthing parts of this reading experience. The confusing bits are pleasantly head-scrambling, and when stuff makes sense, I feel so smart. But there’s so much to take in! I can get down with dialect, and I can get down with world-building, but I can’t grok both at the same time, and that made one section (“Sloosha’s Crossin’ An’ Ev’rythin’ After”) quite a slog for me. Worth it, but a slog nonetheless.

Can we talk about how book is chock full of wise observations about life, the universe, and everything? Here are just a few of the many awesome lines I marked: “Implausible truth can serve one better than plausible fiction.” “Humor is the ovum of dissent.” “An impulse can be both vaguely understood and strong.” “The sacred is a fine hiding place for the profane.”

GZ: Yes! The guy’s amazing. I have about two dozen pages marked! “A half-read book is a half-finished love affair” (which we both tweeted). “Truth is singular. Its ‘versions’ are mistruths” (which politicians could take a lesson from, yes?). And my favorite, “Conduct your life in such a way that, when your train breaks down in the eve of your years, you have a warm, dry car driven by a loved one — or a hired one, it matters not — to take you home.”

We definitely agree on the sloggish nature of Story the Sixth — but it’s in this story that we start to understand The Point of the novel, as it were. And so, while we’re on the quotes kick, peep this: “Souls cross ages like clouds cross skies, an’ tho’ a cloud’s shape nor hue nor size don’t stay the same, it’s still a cloud an’ so is a soul.” Man, I love that.

But we have still 200 pages to go! I can’t wait to see how this continues to play out as we begin to repel ourselves down the leeward side of Mitchell’s mountain.

RJS: There’s definitely more momentum on this side of the mountain. I blew through the second Sonmi section (what Kit called Dystopian McDonald’s Run By Asian Girl Clones) and am so glad to be back with Timothy Cavendish, the most unreliable and entertaining of Mitchell’s characters. There are capers in this section. Capers!

GZ: I think we can all agree that any highly inventive literary fiction that includes capering is worth more than a look. Like you, I lurved the Cavendish section. And I also loved the conclusion to the Luisa Rey section — reminded me of a literary Good Fellas crossed with Heat crossed with Nancy Drew. And I think you’re right, that section especially, but the whole second half in general really went quickly.

One thing I noticed: A clear theme in the first half of each story is captivity — Sonmi, Cavendish, Adam Ewing, and even n’er-do-well Robert Frobisher are all held, in some way or another, against their will or preference. And then a clear theme of the second half is escape, complete with The Fast-Paced Escape Scenes. Some of the characters are more successful than others, and so that creates some suspense at the beginning of each of the second halves of the stories. Will these characters be able to “escape”? That captivity-release dichotomy was fairly cool.

But so, now, the hundred billion dollar question — did ya dig it? Were you not entertained?

RJS: Before I answer that burning question, I think it goes beyond captivity. It’s captivity AND subjugation. And that’s The Point, right? That believing “humanity is a ladder of tribes, a colosseum of confrontation, exploitation & bestiality” is a recipe for disaster and a self-fulfilling prophecy that leads to destruction (or to The Fall we hear about in the Sloosha section).

To your hundred billion dollar question, I say this: I am 100% on board with Mitchell’s message. If fiction has to have a message, I want it served up this elegantly. But here’s the rub — while I’m blown away by the organizational feat Mitchell pulled off (and I can’t stop thinking about what his work space must have looked like while he wrote this), I’m missing the human connection. This is a great book in the “Whoa, look what he did!” sense, but I just don’t feel a beating heart behind it. A friend I was discussing this with used the word “reptilian” to describe Mitchell’s work, and I think that’s right.

GZ: It doesn’t feel quite “reptilian” to me, but as I tried to think of a counter-argument for the “beating heart” notion, I came up blank — you’re right, it was a masterpiece of inventiveness, but like you, I could’ve taken or left at least half of the six individual stories on a content and character basis. And I’m not sure how much I’ll remember any of them a week, month, year from now. That’s to say, the ones I liked (Cavendish, Luisa Rey), I REALLY loved — and Cavendish and Luisa, I’ll remember. I felt like the Luisa section DID have some heart — that you, as a reader, were invested emotionally in the outcome. That’s somewhat paradoxical, I suppose, since that section was the more “thriller-esque” piece. But I do love the message, which Mitchell puts very beautifully in the second to last page: “In an individual, selfishness uglifies the soul; for the human species, selfishness is extinction.”

One final note: If you’re planning to see the Cloud Atlas movie — which is out today! – check out this User’s Guide To Watching (And Keeping Up With) Cloud Atlas, from Word and Film.