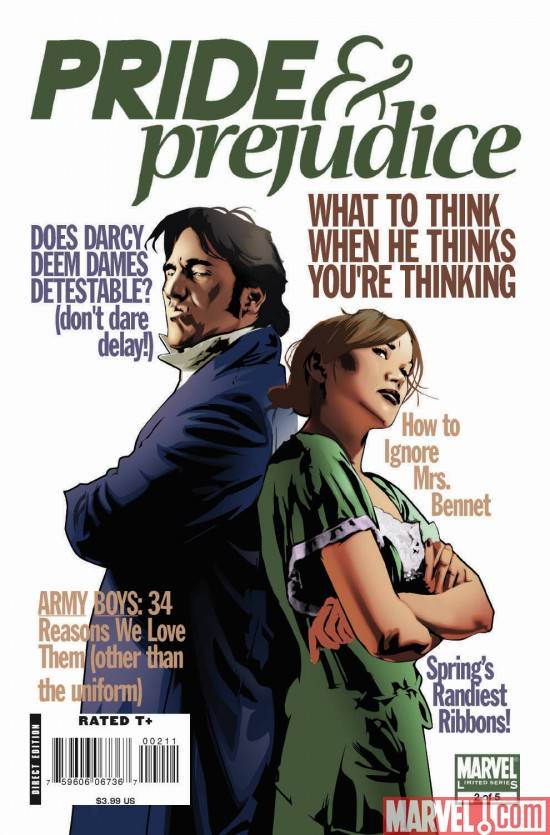 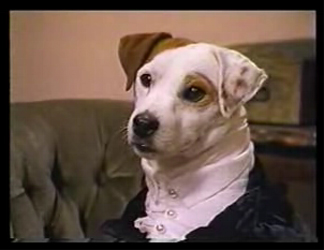 Pride and Prejudice, Jane Austen’s 1813 novel of manners, morality, and money, is one of my most beloved novels. I love Elizabeth like she’s a member of my own family, and I relish in Jane’s sweetness, Darcy’s oafishness, Mr. Bennet’s charms, and the world Austen creates for her wonderful young women. It’s been adapted zillions of times — I think the first adaptation I was ever aware of was the Wishbone episode when I was little (Wishbone played Mr. Darcy, of course).  Here are five of my favourite reworkings of this phenomenal novel.

Number 5: 2009’s Pride and Prejudice and Zombies by Seth Grahame-Smith, soon to be a major motion picture, is probably the most blogged-about adaptation in recent years — because who doesn’t love the intersection of Regency England and nerd culture? The plan here is straightforward: there’s Pride and Prejudice, and then there’s also zombies. It’s everything it says on the tin. Oh, wait. There’s also some ninja action.  (Just read the first one, though. The sequels kinda suck.) 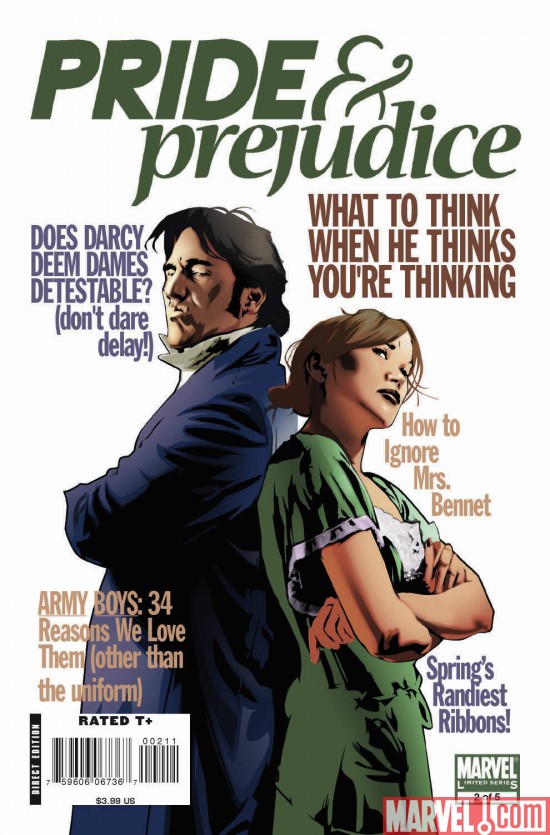 Number 4: I think it would probably be against some important cosmic law to not reference Bridget Jones’s Diary, whether in the form of Helen Fielding’s delightful 1996 novel or the 2001 film adaptation with Renée Zelwegger, Hugh Grant, and Colin Firth. It’s a delightful story in its own right, but I always kind of resented how silly and fluffy Fielding made Bridget — Elizabeth is so strong and not frivolous, and I want that for Bridget too.

Number 3: I’m tying the two major screen adaptations at number three: 1995’s miniseries with Colin Firth (because who doesn’t love The Firth, honestly?) and 2005’s feature film with Kiera Knightley. The miniseries is a classic but occasionally a little draggy — go on, admit it — and the film surprised me because I usually can’t stand Knightley. So they share a spot on this list.

Number 2: Marvel did a lovely job with their 2009 adaptations by Nancy Butler and Hugo Petras, but my favourite thing about them by far are the Cosmo-style covers (see image to the left). While there is some unevenness to the quality of the storytelling in these adaptations, the illustrations and cheeky tone more than make up for it.

Number 1, with a bullet: Have you been watching The Lizzie Bennet Diaries?  If not, you’re missing out. It’s this webseries I am currently completely smitten with that prompted this list. In twice-weeky episodes, each less than 5 minutes, Pride and Prejudice is remounted as the webcam drama of an underemployed grad student and her bevy of unmarried sisters, friends, and suitors. The character have a rich social media world and encourage interaction with their audience. It’s an utterly delightful reworking of the series that I can’t recommend highly enough (but watch out — it has eaten more than one weekend for me). Sidebar for lit-nerds: this is a project of Hank Green, brother of YA author and generally beloved man John Green, who wrote The Fault in Our Stars.

If I missed your most favourite adaptation or have praised something you think is just awful, come meet me down in the comments for a chat about all things Elizabeth Bennet.