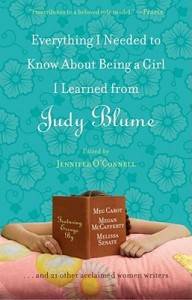 Readers of a certain vintage will doubtless remember thinking of Blubber when they were bullied, and Are You There God? It’s Me, Margaret when they got their first periods–or when all their friends did first, and they spent months waiting for the day to come (and praying that their breasts would someday be the size of tennis balls). They probably think of Forever… when they think about their First Time and how it could have been better, or worse, or just funnier, if they’d only given their boyfriend’s penis a clever name like Ralph.

In the way that the songs we listen to growing up become the soundtracks of our lives, Judy Blume’s fiction is the lens through which many readers–young female readers, in particular–first make sense of the weirdness that is growing up. It’s from Judy that we learn that the most mundane moments can be the most memorable, and that we are never as alone as we think we are, and that when we feel like freaks, it’s not because we are, but because no one else talks about the things that make us feel that way. This collection of essays by 22 women writers is about all of that, and about each woman’s unique experience with High Priestess Judy. Perfect for ‘tweens, teens, and everyone who remembers those years with more painful clarity than they’d like.

Verdict: BUY, one for yourself and one for every reading girl and woman you love. 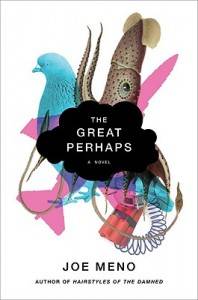 The Great Perhaps by Joe Meno

The shit is hitting the fan for the Casper family. Husband and father Jonathan, a paleontologist on the quest to catch the elusive giant squid, is too obsessed with his work to notice that his wife is having hallucinations and thinking about leaving him; his oldest daughter, a well-meaning but too-serious-for-her-own-good young revolutionary, is building a bomb for a school project; and his younger daughter is struggling to fit in and figure out if she maybe possibly theoretically might like girls. Meno’s take on the dysfunctional family novel is dry and often quite funny, but it drags in parts and occasionally goes further into the absurd than is necessary or useful. 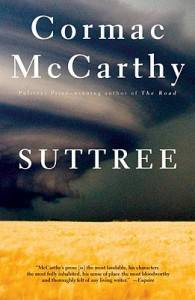 When we first meet Cornelius Suttree, he’s floating down a river in Knoxville, Tennessee on his way to check his fishing lines, before returning to his dilapidated houseboat for another scorching summer evening. Known to all as just Suttree, he’s been in and out of jail (rather, the workhouse), and come to find out, he’s from a well-to-do family he wants nothing more to do with.

It’s the 1950s in the old South, and Suttree runs with a pack of hard-drinking up-to-no-goods. On one stint in the slammer, he makes friends with a kid who’s in for molesting a local farmer’s crops (literally, and it gives rise to one of my favorite lines in all literature, “Somebody has been fuckin my watermelons.”), and their lives come together and fall apart throughout the novel.

This is my first experience with McCarthy–an unusual starting point, I’m told, but one recommended to me by a trusted friend–and I’m laughing way more than I expected to and falling in love with McCarthy a bit more on every page. Just, wow. 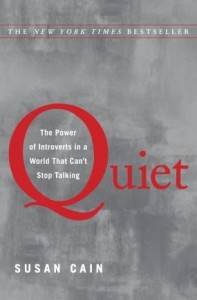 For most of my life, I thought of myself as an extrovert, mainly because that’s what everyone in my life told me I was. I’m talkative, gregarious, and I love a good party when I’m in the mood for it, BUT (you knew there was a but coming, didn’t you?) going out and being social wears me out, and 90% of the time, I’d rather be at home, curled up with my husband, my dog, and a good book. I like people, but I need to be alone A LOT in order to recharge. I like quiet. Working from home, and doing most of my work by myself, is my happy place. Turns out I’m an introvert, or, more likely, what Susan Cain calls an “ambivert,” and I can’t tell you much this realization has affected the way I think about my personality and my work.

In this brilliant and important book, Cain reframes introversion and takes special care to point out that liking quiet and needing to be alone are not negative traits, or equivalent to being anti-social. She examines America’s obsession with extroversion, points out some of the ways it has produced less-than-desirable (and sometimes disastrous) results in business and politics, and highlights introverts whose ideas and inventions have changed science, society, and how we live.

Verdict: BUY if you’re an underliner/re-reader, a manager, or in need of a new way to make sense of yourself or the quiet people in your life; otherwise borrow….and then decide you need to buy.

News, new releases, and must-read forthcoming titles.
Thank you for signing up! Keep an eye on your inbox.
By signing up you agree to our Terms of Service
#Buy Borrow Bypass#Features#Fiction#Literary Fiction#Non-Fiction#Young Adult Literature#cormac mccarthy#judy blume#quiet#susan cain#the great perhaps