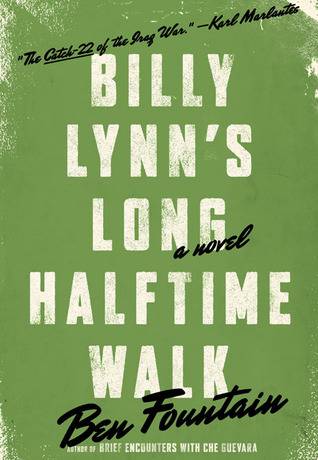 We here at Book Riot are huge Tournament of Books fans, so this year we’re going to discuss each of the finalists in the weeks before the Tournament gets underway, in alphabetical order. You can find the schedule of our discussions here. Read along with us!

When I first started reading Billy Lynn’s Long Halftime Walk, I couldn’t figure out where I had heard the author Ben Fountain’s name before. A quick Google search later and I had it. Fountain was the hero of the opening anecdote of Malcolm Gladwell’s 2008 New Yorker essay “Late Bloomers.” In the piece, Gladwell details Fountain’s story, an associate at a real estate practice who quit his job to spend the bulk of the next 18 years sitting at his kitchen table working on short stories that would eventually form his sensationally-reviewed 2006 collection of short stories Brief Encounters With Che Guevara. 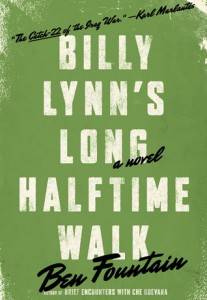 Billy Lynn’s Long Halftime Walk , a novel detailing one day in the life of Specialist Billy Lynn on the last day of a media-intensive tour with his universally-acknowledged to be national heroes Bravo Squad, was published this spring to over-the-moon reviews. It ended up being a National Book Award Finalist. On my blog Books are my Boyfriends, my summation of the book was “… if this novel isn’t shortlisted for a Pulitzer I will punch myself in the face and put it on YouTube.”

I still stand behind that statement. If I’m going to be completely transparent, I think the novel has a better shot at winning the Pulitzer than it does at winning the Tournament of Books. If I were a competing book I would not want to tango with fan favorites Gone Girl and The Fault in Our Stars. Plus. Billy Lynn also has the handicap of having to play in against two other modern war novels, Fobbit (by Book Riot’s own David Abrams!) and Kevin Johnson’s The Yellow Birds. I’ve not read either, though both are on my TBR list.

Below, fellow Rioter Nicole and I discuss.

KS: So what do you think about Billy Lynn having to earn its place in the tournament by competing in a war-novel play-in? (We all know Jeff O’Neal is not a fan of the “war novel ghetto,”) and honestly, I think it seems like this was the play-in idea the gamemakers had one or two ideas before they were going to have the REALLY GOOD play-in idea.

NP: I think it’s intriguing but ultimately unfair. The three war novels chosen, Billy Lynn, Fobbit, and The Yellow Birds, spent much of last year being compared to one another, which makes sense. I myself plan to do a series on my blog discussing the three of them, once I’ve read The Yellow Birds. One of the questions everyone has been asking and attempting to answer is how far down the road we are to creating a real “post-9/11 literature,” and a narrative of the post-9/11 wars. It makes sense to look at war novels as a group to answer that question, but limiting their presence in the wider culture of books to a single “war-novel slot” seems to do the opposite. Further, it divorces those wars from the rest of the culture, when part of the whole question these books ask is how they fit into the rest of the culture. So I think the comparison is a worthwhile exercise in its own right, but to shoehorn it into a larger tournament falls somewhere between “contrived” and “discriminatory” for me.

Since you’re a big fan of Billy Lynn but haven’t read either of the other books in the mini-category, what would you say is Billy Lynn’s biggest flaw, and what are your thoughts about how it contributes to a cultural narrative about the war?

KS: Well I know it would be cheating to say I think the biggest flaw was that the book was “too short,” and I am no cheater! I think that the third-person voice of the novel is electric and shocking, no qualms there, but in the dialogue the soldiers voices tended to bleed together (I know there’s some authorial intent there, indicating the dominance of group-think, but still) and every once in awhile the skewering of Texans felt like cheap shots.

As far as how it contributes to our cultural narrative of war, I deeply appreciate that this is a war novel that takes place at home. The most hilarious and horrifying insights in the novel come from how Billy and his squad are received during their heroes’ tour, by everyone from family members to Hollywood execs to Dallas Cowboys cheerleaders. Reactions vary, but there is an unnerving undercurrent running through all their encounters with civilians: no one REALLY knows how to deal with these boys. Home no longer feels like home. Bravo Squad is the only place where these young men feel safe. And Bravo Squad is going back to Iraq at the end of the novel. The questions this novel raises regarding where young military people belong once they’ve experienced the arena of war, are so weighty and complicated and so worthy of fiction.

What about you, Nicole? Biggest strength of the novel and biggest flaw? How do YOU feel it contributes to the war narrative? And if you were a gambling man, what kind of odds would you place on Billy Lynn in the Tournament?

NP: Your last question is the hardest one, since we don’t yet know how the pre-game aspect of the tournament will really work. I think it has a solid shot of making it into the main round, but I think the field of war novels is going to be close. My bet is that Billy Lynn will win because it is, as you point out, a war novel that takes place at home.

I think the novel’s biggest strength is in its absurdity and overall gonzo-ness. The Bravos don’t just star in any halftime show, they star in a Dallas Cowboys halftime show. And not just any Cowboys game, but the Thanksgiving Day game. Billy doesn’t find just any girl to connect and make out with, but a Cowboys cheerleader. And of course, they’re not just any group of soldiers, but one with a serious possibility of having a movie made about them. And that deal hangs precariously not just for all the usual reasons a movie deal might, but also because they’re about to get sent back into a war zone where they might die before they can sign on the dotted line.

But that “no one REALLY knows how to deal with these boys” was a major weakness for me. Billy certainly feels that way, and he rejects the poor attempts at a connection with him from everyone he meets. But Billy, of course, isn’t writing the novel; Ben Fountain is. I read this as a civilian basically saying that no civilian can ever hope to have a connection with the soldiers they employ–but a civilian puts himself in a soldier’s shoes to make that point. I think that many Americans do feel that way. Many people are certainly aware of the small segment of the population that makes up the military, and feel culturally divorced from that side of the country. “We,” in some sense, seem to be afraid that we can’t understand these men and women, no matter how hard we try, and Billy Lynn confirms and reaffirms the separateness of civilian from soldier. I wasn’t completely satisfied with how Billy resolved this for himself at the end of the novel, so it remains a weak point for me.

What do you think about Billy’s voice? Do you think it comes across as unrealistically introspective and articulate (he is a young guy, after all), or did you buy that these were his thoughts, and not those of a novelist writing about a young soldier?

KS: What I liked so much about Billy’s voice was that he was clearly an unusually perceptive young man, but didn’t have the liberal-arts-graduate-speak to communicate his ideas, so the result ended up feeling like a fractured self-awareness (as opposed to a witty, bantery, and ultimately irritating self-awareness.) I really like him as a character who feels like he could be book smart if only someone was making him do his required reading, I thought that was an original, honest, and ultimately heartbreaking choice.