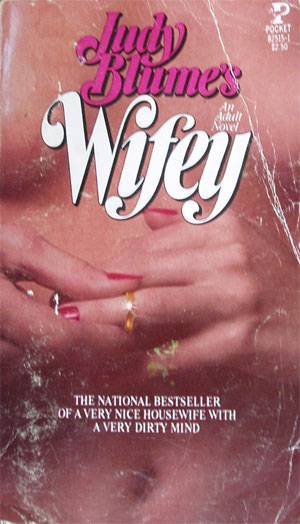 Bookish women of a certain age all did kind of the same thing around kind of the same time, I am convinced — around 12 or 13, we finished with all the Judy Blume the library had to offer us in the children’s section and, armed with very very very dangerous knowledge like how to work a card catalogue, we came across Wifey, Blume’s 1978 novel for adults. We found it on the shelf in a new section (because while we had perhaps forayed into the grown-up areas of the library before, it was usually for genre reads like mysteries and true crime), read the back of the book, wondered if something wasn’t a little off-kilter, and instead of checking it out — because small-town librarians do talk — we curled up in a corner of the library and read.

At least, that was my experience. And now as a forreals adult and married lady at that, it seemed like a revisit of Wifey had to be in the cards — and I knew just who I wanted to reread it with me: Rebecca Schinsky, my internet-only Boston Wife and the esteemed Associate Editor here at Book Riot. We’re the same age and have the same sense of the world, and I’m pretty sure we would have been best friends when we were 12 if given the opportunity. So I messaged Rebecca one day to ask if she had sneak-read Wifey, and she backed-up my theory, and we were off to the races.

Brenna: The first thing is, how did you find your way to Wifey?

Rebecca: The details are fuzzy. I think I was twelve. I remember being at the public library and seeing the book cover with Judy Blume’s name on it and feeling really pleased that it turned out I hadn’t actually read all of her books. Our library had a cool self-check-out machine, so I just stashed Wifey in the middle of my stack–I could tell from the cover it was a Book For Grown-Ups–and went about my merry way. Hooray for evading adults while picking up inappropriate reading material! How about you?

BCG: I was never a child whose parents limited her reading, which was good because the collection in our public library was small and strict parameters would have limited my blossoming love of reading. But I didn’t really need my parents to be strict about my reading because I had a ridiculously strong in-bound sense of decorum that I obeyed always. Except for Wifey. For Wifey, I told my sense of decorum to shove it.

Because I knew I wasn’t supposed to read it. I mean, the cover said “An Adult Novel by Judy Blume” and I was not, to be sure, an adult. The back of the book was all about marriage — no fourth-grade nothings or forevers here — and femininity and womanhood within the confines of a late-60s, early-70s marriage at that. And if I wasn’t sure I should read it from the front and back cover, the opening scene with the naked guy on a motorcycle masturbating on to the Pressman’s lawn? Yeah, that kind of made it clear that I wasn’t supposed to be reading this novel. But I didn’t stop. 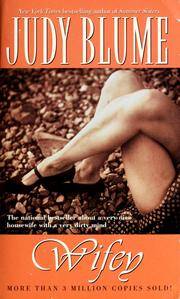 RJS: My parents didn’t limit my reading either; I think they figured that if I was going to learn about things I was maybe a little too young to learn about, books were the best possible source. I didn’t have your inbound sense of decorum, though. Give me a chance to read something naughty, and I couldn’t resist. (I blame this on the fact that my parents were constantly fast-forwarding through the kissy scenes in movies, which only fueled my curiosity.) My most salient Wifey memory is the mental image of The Masturbator (that’s how I think of him) standing on Sandy’s front lawn wearing nothing but a stars-and-stripes motorcycle helmet and a smile. It’s the first risqué bit in the book, but it’s far from being the most risqué. What do you remember from your first read?

BCG: I remember so clearly that Norman made me terrified — TERRIFIED — of marriage. Like who is that guy? As a child he seemed so layered and complex in his unpleasantness to me. I mean, I didn’t understand the depth of Sandy’s dissatisfaction really, at 12 (particularly I don’t imagine I understood at all her sexual dissatisfaction, really). But he just seemed so cold. And I had been through the rest of Blume’s books so from the child’s perspective I had read all these narratives of divorce and dissatisfaction and coldness. And then there’s Norman, in all his assholeish, mama’s boyish, douchebaggery and I remember thinking, “What if that’s what you get saddled with? What if that’s what you have to vow to make work forever?”

Rereading from an adult perspective, Norman’s actually kind of cartoonish in his bad husbandness. I mean, he kind of has to be so that we can remain sympathetic to Sandy throughout her infidelities, but as I was exclaiming in genuine rage at his actions, my husband asked if this guy was supposed to be a real person, or a Disney villain. Which is a fair question, I think. Adult me wanted a more nuanced Norman. 12-year-old me wanted Sandy to join a lesbian cult five states west and never see him again. Did you have such forceful feelings about Norman? 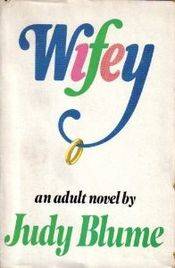 RJS: I don’t recall having any feelings about Norman from my first reading beyond the general UGH OH MY GOD NO. On this reading, I did find him sort of comically bad–it’s a good point you make that he needs to be endlessly hateable for us to be able to side with Sandy–but I think some of that is because I’m reading through my modern, sexually enlightened, internet-filled-with-porn perspective. Yeah, it’s detestable when Norman refuses to do it in any non-missionary position, and don’t get me started on the whole “Did you get your dessert?” thing as code for “Did you come?” It’s the worst!

But Norman’s of a generation of men whose expectations about sex were shaped by a whole different set of rules than what we’re working with now, and I think the tension between him and Sandy–who is definitely down to experiment–is pretty reflective of what happens to a couple’s dynamic when one member is changing and the other can’t or doesn’t want to keep up. Whoa. Who knew reading Judy Blume could be so deep?

BCG: Well we’re getting to something we were talking a little on Twitter. This book is like pretty whoa for 1978! What did I call it — Judy Blume stepping out from under the baggage of Blumeness? I mean, this is a courageous book for any woman writer of her era, but for her as a writer of fiction for children? A female writer of fiction for children? I mean, talk about having ovaries of titanium to make her persona so much more complex. She was already so under fire as this racy writer of bannable books; imagine the fuel this put to the fundamentalist fires that were trying to keep her books out of schools and libraries. Our Judy was a brave woman! I mean, imagine if JK Rowling had released a soft-core porn novel between books 3 and 4 of Harry Potter? Dude. I think one of the sadnesses for me is that it feels really kind of hokey now, this sort of country club bodice ripper that Wifey is. But it was really shocking and edgy in its moment, especially coming from a writer of Blume’s stature and role. 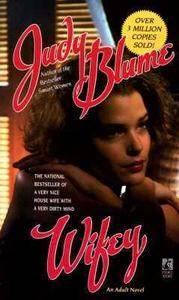 RJS: I could totally live without a JK Rowling bodice ripper, thankyouverymuch, but you know what would be so awesome? An update to Wifey! I wonder if Her Royal Judyness has thought about it. I re-read Forever… a couple summers ago, and it has an updated foreword with notes about STDs and other modern concerns. An update of this one would have to include the internet, and maybe Sandy wanting to try BDSM instead of just a different position. And there probably wouldn’t be topless pool parties. But think of the sexting! You just know our woman JB could write some great fictional sexts.

BCG: Okay, were topless pool parties like a forreal thing? Because that scene made me so happy to not exist in that socioeconomic demographic in New Jersey in the 1970s. I can’t even tell you. And OMG Blume sexts. I’m imagining — well I won’t say what I’m imagining. I wonder if Judy Blume’s more recent adult novel Summer Sisters is of this sort. It’s still pre-texting, though. I guess what we’re asking for is MORE BLUME.

RJS: Oh, totally. I’m sure I went right back to the BSC and R.L. Stine’s Fear Street series, and swore off all things boy-related for at least another couple months.

There’s something really thrilling about a good sneak-read that’s virtually impossible to recapture as an adult, but I’m glad to have done this just to recall that first experience and gain an appreciation for what Judy Blume really did with Wifey. And there’s no one I’d rather have done it with than you, my Book Riot wife.

BCG: And then we had dessert. But it was chocolate cake, not, like, Norman being creepy.