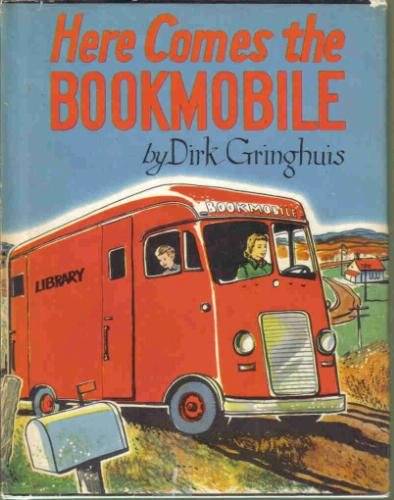 I can’t imagine a better way to celebrate than to read some awesome books about bookmobiles. Except maybe reading them while moving. So hop on a bus or go for a stroll with one of these books in hand to get the full celebratory experience:

WITH A HIGH HEART

With a High Heart (1945) is only one of a surprising number of romance novels about bookmobile librarians published in the middle of the twentieth century—others include Books on Wheels, Books and Beaux, Nancy Runs the Bookmobile, and Girl on the Bookmobile—but it’s probably the most fun. (Nancy runs a close second, though they’re all pretty amusing.) With a High Heart follows the adventures of Anne, who drives a bookmobile around rural New Jersey during the Second World War, bringing books to the people and, naturally, meeting a handsome young fellow along the way. It’s silly nonsense, but it’s enjoyably silly nonsense. With a High Heart can still be found in some libraries and used copies are usually available at online retailers.

The story of Here Comes the Bookmobile (1952) isn’t the most exciting thing ever. It follows a young boy who joins his librarian aunt on a circuit of the county, aboard her bookmobile. Like I said, cute, but the story really isn’t the point. It’s the book’s aesthetic that I’m in love with. Look at that cover. That font! That blocky red bookmobile! The book is a bright, happy, appealing pleasure to flip through. Copies of Here Comes the Bookmobile are available pretty cheaply at online retailers. 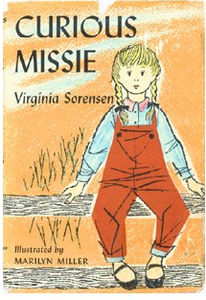 Curious Missie (1953) tells the story of a young, often disastrously curious young girl named Missie. (Creative title, eh?) With her constant questions, Missie endears herself to a local librarian who gets her to advocate for a bookmobile in their very rural Alabama county. When the plan succeeds, Missie rides along on the bookmobile, touring the county and getting to know the people. The book climaxes in a big meeting held after the county commission reallocates the bookmobile’s funding to a rat-killing program. The book is deeply earnest and optimistic about democracy and community, and I think it’s best read with a skeptical adult’s eye. But it’s a charming read, and the spare and evocative line drawings by Marilyn Miller are a delight. You can find Curious Missie at various online retailers.

This novella presents an alternate universe in which Queen Elizabeth II follows her corgis (!) aboard a bookmobile (!!) and is forever changed by the books she finds there. Bennett attempts several seemingly impossible things. He tries to make The Uncommon Reader both a sharp political satire and a gently humane story about how reading changes minds and transforms lives. He aims to offer a sweet story that is also a meditation on the limits of political power. I say seemingly impossible because, against all odds, Bennett succeeds, beautifully. And he does it in less than 120 pages. With corgis. In other words: IT’S AMAZING GO READ IT NOW.

In Reading Places: Literacy, Democracy, and the Public Library in Cold War America, library historian Christine Pawley tells the story of a bookmobile program in two Wisconsin counties in the 1950s. That might sound a bit dull, but it’s actually anything but. (And not just because I’m writing a book about bookmobiles myself.) In Pawley’s hands, the tale is one of competing ideologies and sharp political conflict. Nicely written and finely detailed, Pawley also manages to put these Wisconsin bookmobiles in the rich context of the history of books and reading in America.