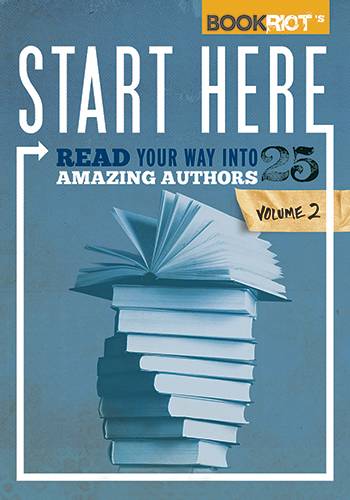 It’s the last day in our Kickstarter campaign to publish START HERE, Vol. 2, a book designed to help you read your way into 25 amazing authors you’ve wanted to try but haven’t known where to start. It’s important to us that the Book Riot community has a hand in shaping the things we make, so we asked you to write your own sample chapters for the book on the authors you’re passionate about. There were a bunch of terrific entries, and we selected four finalists for you to vote on.

Gina’s entry on C.S. Lewis received the most votes, and she has won a $50 gift card to her favorite book retailer. Her chapter will also be considered for inclusion when START HERE, Vol. 2 is published. Congratulations to Gina, and a big thank you to all our finalists and everyone who entered.

Why would anyone today want to read an author who, decades ago, was calling himself an outdated “dinosaur?” Because he happened to be dead wrong about that. C. S. Lewis’s work deals with timeless themes, in dense but lucid prose that refuses to grow old. He’s hardly the forgotten writer that he believed he would become; on the contrary, many of his books are bestsellers to this day.

But where to start with an author who wrote everything from children’s stories to sci-fi thrillers to lengthy treatises on medieval literature? Here are my suggestions.

The Lion, the Witch, and the Wardrobe. Okay, probably you’ve already read it—though maybe you haven’t. I didn’t until I was in my twenties. But it’s where most people first encounter Lewis, and I think that makes a lot of sense. Distilled in the Chronicles of Narnia, and especially in this first book, are all the imagination and humor and spiritual insight that suffuse Lewis’s entire body of work. Not to mention that a good deal of fantasy literature in the decades since the series was published has been either inspired by it, or reacting against it. (I’d suggest that if one reads Philip Pullman’s deeply anti-religious His Dark Materials series, it’s a good idea to read Narnia as well, and get the other side of the debate, so to speak.) So if you’ve already read Lion, perhaps it’s worth revisiting—and if you haven’t, you have a treat in store.

The Screwtape Letters. I’m tempted to describe this one as “devilishly clever” and leave it at that, but that would hardly do justice to this unique and inventive novel. Through a series of letters, a senior devil instructs his nephew in the fine art of luring a human soul to its doom. The genius of the work resides chiefly in its reminder that evil is not necessarily some grand, tragic, irrevocable choice we make one fateful day. Rather, it’s more often the small, selfish choices we make, day after day, that lead us in the wrong direction.

Letters to Children. Here’s where I throw you a curveball. It’s always been my opinion that you can’t really get to know Lewis until you’ve caught a glimpse of the warm heart beneath the giant brain. And reading this compilation of letters is one of the best ways to do this. Writing to various godchildren and young fans, Lewis answers a plethora of questions, commiserates about school difficulties, offers help with their own research and writing, and draws little doodles of cats and elephants. (“I can only draw a cat from the back view. . . . I think it is rather cheating, don’t you? because it does not show the face which is the difficult part to do,” he confesses to his goddaughter Sarah.) He even encourages some of them to write Narnia fanfiction if they want to—surely one of the most generous gestures a novelist can make.

From there one can branch out in any number of directions—to the Space Trilogy and the mythological novel Till We Have Faces; to other theological works like The Great Divorce and The Weight of Glory; or to literary essays like “On Stories.” But I believe the three books I’ve listed above are a good starting point to discover which facet of Lewis you like—or whether, as I do, you just might like all of him.