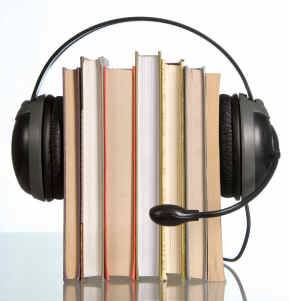 The Audiophiles is a regular column in which contributors Rachel S. and Cassandra chat about the latest and greatest audiobooks on their radars.

CN:  So, I took this really awesome picture when I was in New York for BEA. In this picture, there are a lot of audiobook narrators and audiobook enthusiasts. One face in this crowd is of particular interest to me, though. I circled her.

Her name is Karen White, and she narrated my very first audiobook, The Peach Keeper. That first audiobook was kinda like a first date. I was shy, uncertain. I didn’t know what to expect. But she was gentle. I really enjoyed myself, and I wasn’t nearly as scared the next time around. If only all my firsts had been that good. *sigh*

RSH: How great that you met her — she’s adorable! My first was Kerry Shale, who led me deep into the throes of Jonathan Safran Foer’s Extremely Loud and Incredibly Close during my cross-country move from Minneapolis to Vermont eight years ago. He’s better known for the Jack Reacher series, and he was solid, but our chemistry was just a little off. There was no spark! Then I schlepped my way through a series of celeb readers: Sarah Vowell, David Sedaris,  Al Franken, Matt Damon. But the first narrator who really showed me the business is Jim Dale. His performance of Harry Potter set off some serious endorphins and turned me into an audio addict.

CN:  I’m not sure that I’m exactly an addict yet. Now that I work mostly from home, I find myself not remembering to turn on a book because more often than not I have the TV on in the background. But when I’m on the road, I devour them. I listened to 5 on an extended road trip last year, and that kept me going for a while. The one that got me, though, was Neil Gaiman. I can listen to him read his books, tell his stories, all day long. He’s just sooooo good, and that voice is yummy! He also has a really great sense of what books will work well in audio. His Neil Gaiman Presents label puts out some really great (even award-winning!) audios.

RSH: Ooooh, Neil Gaiman! Fend me off, sister. I’d feel terrible if I didn’t at least mention another important group of audiobook “firsts” for me. Early on I got hooked on listening to, wait for it… pop sociology books: Dan Ariely’s Predictably Irrational read by Simon Jones, James Surowiecki’s The Wisdom of Crowds read by Erik Singer, Malcolm Gladwell’s The Tipping Point read by himself. Science! Bizarre facts! Quick bursts of cocktail party trivia! These audiobooks were awesome for those days I just wasn’t in the mood to watch Say Yes to the Dress at the student gym. Because that’s what was always playing on the one TV, I swear. To this day my #1 piece of advice for audio-curious people is to try non-fiction.

CN: Really? If I had started with non-fiction, I don’t think I would have stuck with it. I’ve listened to one memoir (Let’s Pretend This Never Happened by Jenny Lawson), and that was solely because I was already so familiar with the author and the comment from her blog and Twitter. I’ve tried other non-fiction, including books by the wonderful Mary Roach, and I lose interest so fast! Of course, that happens when I try non-fiction in print too. I think that says more about me than the quality of the audio though.  I like to live in fictional lands. Reality is boring! The right narrator with the right book can completely pull me in, and I don’t even want to leave the car.

RSH: I don’t want to leave this conversation about our first audiobooks. But my audio TBR pile is stacking up, so onward!  And someday soon I really-really-ten-reallies want to pick your brain about audiobook rereads. Pinky promise?

CN:  Oh, I could just go on and on and on about that. You don’t know what you’re getting yourself into!

Category ID: 1529
Category ID: 473
Category ID: 479
True Story Newsletter
Sign up for True Story to receive nonfiction news, new releases, and must-read forthcoming titles.
Thank you for signing up! Keep an eye on your inbox.
By signing up you agree to our terms of use

So guys, what was your first audiobook? Which narrator swept you off your feet and made you a listener for life?