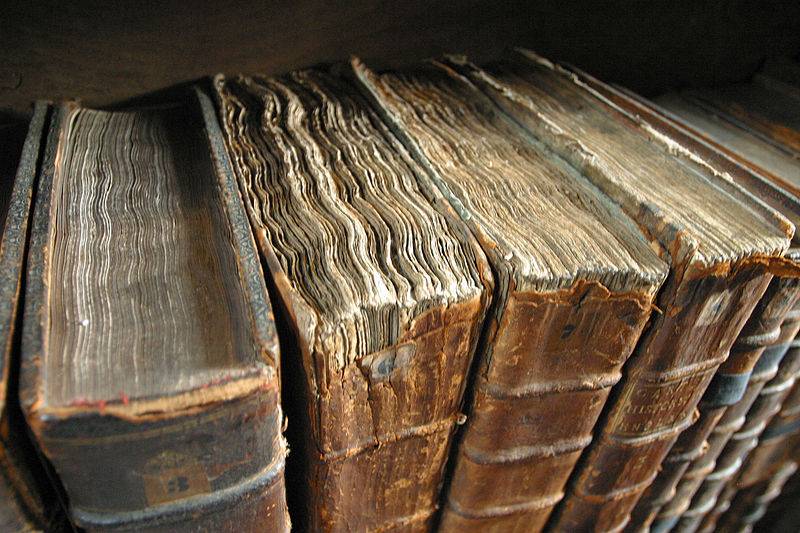 Greetings, everyone! I’ve just returned from a dangerous but fascinating adventure. You know Verne’s Twenty Thousand Leagues Under the Sea? It was kind of like that. But it didn’t involve water. Or a submarine. Or a freaky captain. Or fantastic sea creatures. It involved books.

I hear you saying “but books are not scary!” and I say, no of course not, when they’re bright and shiny and new. But when you go hunting for them in the depths of a university library, far into the stacks where the books sit mouldering for years and years, rarely touched by human hands. Well…the hair is currently standing up on the back of my neck, so…..

Below are five obscure late-19th-century anglophone novels (and when I say “19th century,” I mean the actual, physical book is that old!) that are musty and dusty and probably hadn’t been touched in a century. I haven’t read them yet, so I’m simply going to GUESS what they’re about now, just from their titles and what little info I found about the authors. If any of you readers express particular interest in one or more of these books, I will be glad to write follow-up posts in which I review these musty dinosaurs. Until then, enjoy the smell of old books! 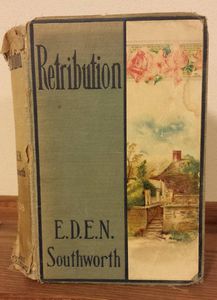 Is it just me, or does the image of a knife dripping with dark-red blood come to mind when you hear the word “retribution”? I even hear it in my mind like Rrrrrrretribuuuuuuution….dah dah DAH! So you can imagine my surprise when I picked up a novel with this title and saw, not a depiction of blood or murder, but a pretty little house with flowers and leaves. What? How can anyone exact retribution in such a nice-looking place? I wondered. But I know all about Ms. Southworth and her cuhRAZY novels, so I’m ready for anything. Do your darndest, Emma. 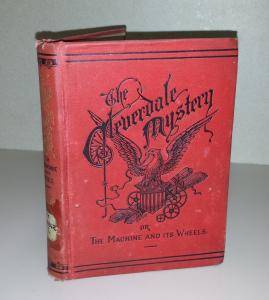 The Cleverdale Mystery: or, The Machine and its Wheels. A Story of American Life (1882) by W. A. Wilkins

[MUST-OMETER READING: NOT TOO MUSTY, IN SURPRISINGLY GOOD SHAPE]

I haven’t been able to find any information about this W. A. Wilkins (man? woman? robot?) or the Cleverdale Mystery so I’m going to have to improvise. Let’s see: I’ll bet it’s a mystery…about some stuff that went down in a place called Cleverdale. And since some 19th-century writers were unashamed to give people and places character-appropriate names, I’m going to take a wild guess that someone in this novel is SUPER clever. “The Machine and its Wheels”- hmm, makes me think of the E. M. Forster story, “The Machine Stops.” Maybe there’s something here about a machine that stopped in Cleverdale and someone’s gotta figure it out or they alllll diiiie. I’m gonna go out on a limb here and guess that it’s set in America. Sounds interesting! 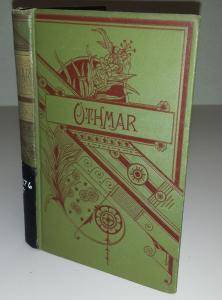 Ok, so I’ve read Ouida before, and she can write a RIDICULOUS novel if she wants to. If you must know, I read Tricotrin: The Story of a Waif and Stray (1869), which had something to do with revolutionary France, an orphan who becomes a great lady, a (hide your children!) shameful actress, and the dude who knows everybody’s secrets. It was a really long time ago. I’m going to take a stab at Othmar by guessing that it has something to do with one of two people: 1) St. Othmar: a monk and priest appointed as the first abbot of the Abbey of St. Gall, a Benedictine monastery in Switzerland; or 2) Othmar Ammann, a Swiss-American structural engineer who designed the George Washington Bridge. Now, this is a wild guess, but I’m thinking that since Ouida died more than 70 years before Othmar #2 was born, the book is going to be about the monk. Or someone named after the monk. Monk or no monk, it’ll be a wild ride I’m sure. 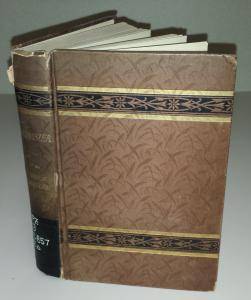 [MUST-OMETER READING: MUSTY, BITS OF BOOK AND PAPER FLAKING OFF]

Just saying up front here that I don’t know anything about Zoroastrianism. I’ve of course heard of but haven’t read Nietzsche’s Thus Spoke Zarathustra, and the internet tells me that Zoroaster was a Persian prophet who was all about monotheism. That is the extent of my knowledge in that area. Crawford, on the other hand, I know more about. This dude was born (romantically enough) in Italy, to a sculptor dad and a mama descended from old Bostonian families. He loved Italy so much (who wouldn’t?!) that he wrote a gazillion novels set there. So far, I’ve only read the first in a trilogy of opera novels he wrote during the first decade of the 20th century. Italy, opera- yeah, I’m down with Crawford. I’m going to guess that Zoroaster is about a guy who writes an opera of the same name and then has an affair with some married Italian lady and then there’s stuff about escaping to America and lots of letter-writing. 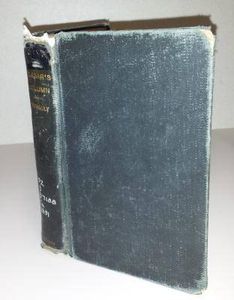 Cæsar’s Column: A Story of the Twentieth Century (1891) by Edmund Boisgilbert (Ignatius Donnelly)

[MUST-OMETER READING: DON’T GET ME STARTED ON THIS ONE]

A literary reference database has informed me that Caesar’s Column is a “gloomy Utopian novel.” Ummm…don’t they mean “distopian”? How can a utopian novel be gloomy? Shouldn’t it be filled with happy, industrious, fulfilled, well-fed, prosperous, and beautiful people, like the people in the 20th century in Bellamy’s Looking Backward? Well, anyway, this Donnelly or Boisgilbert or whatever guy seems interesting- he was a Populist politician and agrarian reformer, and even wrote a couple of books arguing that Francis Bacon wrote the Shakespearean plays. Oh, Mr. Donnelly, really?