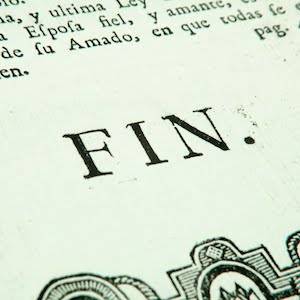 Let me clarify my stance on endings. I don’t need them to be happy. I’m actually not the number one fan of happy endings, because with the kinds of complicated stories I tend to gravitate towards, a truly happy ending, more often than not, feels oversimplified and tacked on. I don’t want all the strings hanging loose at the end, but I equally don’t want all those strings tied up into neat and pretty birthday package bows. I don’t live in a world of bows (or at least, I don’t live in a world that’s ONLY bows) and I want to see the irony and tragedy of life reflected on the page in a way that’s at once both familiar and surprising OH MY GOD IS THAT SO MUCH TO ASK FOR?

Yes. Yes it is so much to ask for. I don’t care, I’m the Veruca Salt of Readers, I want my mindblowing ending and I WANT IT NOW.

So I don’t need my endings to be happy. What I do need them to be is satisfying. For some people, a satisfying ending is synonymous with a happy one. Fans of the romance genre expect their endings to be happy, as they should, happy endings are a component of that genre, fans feel cheated if they don’t get what they’ve been promised.

But romance isn’t my genre. My genre is literary fiction (and narrative non-fiction, and YA that skews literary, and poetry from the last two centuries and, okay, I have a lot of genres, but the genre that this crankmonster rant-growling focuses on is literary fiction).

For me, a satisfying ending is when a dramatic question has been thoroughly explored throughout the course of a story (Can Anna Karenina find happiness with Count Vronsky? Can Peter Pan convince the Darling children to stay with him in Neverland? Can Hamlet avenge his father’s death?) and an answer that makes sense has been reached. Often the answer to the dramatic question in question is NO, because it was always SUPPOSED to be NO. It’s not the ending that feels GOOD, but it is the ending that feels RIGHT. If Anna ran off with Vronsky with no consequences, if the Darling children stayed in Neverland forever, if Hamlet was just like “Fuck this Elsinore noise, I’m getting out of this crazy castle and maybe also Denmark,” yes, those characters might be happier but we the readers wouldn’t. At least I as a reader wouldn’t. I’d feel like the honest, hard, sad ending was ripped off the end of the story and replaced with the tail of a different species of book. The story would no longer feel like its own animal. It would feel Frankensteined, and we all know what happened to Frankenstein (he murders a bunch of people and then moves to the North Pole).

That’s been my problem with the endings of the last few books I’ve read. They don’t feel like the inevitable endings of these stories, what I believe, within the world the author has set up in the beginning and developed in the middle, would really happen. They feel like “This book is about to end so I better wrap things up, okay, the conflict that had been going on the entire book is resolved, okay there’s a deus ex machina and the characters that were in danger aren’t anymore, okay, we’re done.”

These endings don’t work for ME but I’ve talked to people about the books in question for whom these endings absolutely work. So I don’t know. Maybe I am just nothing but a cuddly as a cactus, charming as an eel Last Page Grinch. I might just be too picky about my endings. But usually, the reason I’m so hard on endings is because I loved the beginning/middle of the book in question SO GODDAMNED MUCH!

My real problem isn’t that I hate these endings, but that hating these endings makes me hate the entire book even if I loved the beginning and middle. And that’s not fair. An awesome two-thirds of the book shouldn’t lose to the lame last third, a rockstar three-quarters shouldn’t lose to the disappointing last quarter, but they do, for me, once I get pissed about an ending, it’s just so hard for me to love the beginning and middle in the same way.

What about you guys? How does a disappointing/unsatisfying affect you? Are you like “Cool, whatever, brah” or are you like “RRRRAAUUUUGGGGHHH!” Tell a girl a story.