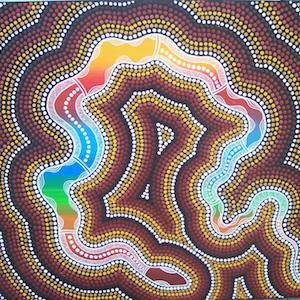 Folktales, myths, and legends from around the world are a great way to expose kids to a diverse range of cultures and ignite their imaginations. Here are a few to get started with:

Africa: “Words as Sweet as Honey from Sankhambi”

This is a short tale from South Africa in the same vein as Kipling’s Just So Stories. “Words as Sweet as Honey from Sankhambi” is about a trickster who is constantly playing pranks on monkeys. The story goes that monkeys once had potbellies and were not quick and nimble like they are today. Sankhambi lures the monkeys to a cave promising a beehive full of golden honeycomb, but when they arrive Sankhambi stomps his feet and makes the monkeys believe the cave is collapsing. He tells them they must hold up the roof while he goes to find support beams and the monkeys believe him, pushing against the roof with their arms all day. By the time they realize it’s all a trick, the exertion has burned off all their extra body fat and they are now fit and limber. This story can be found in Nelson Mandela’s Favorite African Folktales.

Baba Yaga is an evil witch from Russian folklore. There are many stories about her but this one in particular, retold by Katya Arnold, features Tishka, a young boy who is kidnapped by the witch who then tells her daughter to cook him for dinner. Tishka outsmarts the daughter and cooks her instead. Baba Yaga eats her daughter, thinking it’s Tishka, but then Tishka yells down from the tree where he is hiding that it was her daughter instead. Baba Yaga goes into a rage and starts to chomp on the tree until it is close to being felled. Tishka cries for help to the geese flying by, but they all ignore him until a solitary ugly gosling saves him and he is returned home safe and sound. A sort of Russian Hansel and Gretel story, Baba Yaga was a favorite of mine as a kid. It’s a great scary story to tell at Halloween.

Australia: “The Beginning of Life”

In Aboriginal culture there is a time of learning called the Burr-Nong. Burr-Nong begins at age twelve and ends between the ages of sixteen and eighteen. During this time many important cultural traditions are passed down to the younger generation, including the Dreamtime stories. Dreamtime is the source from which the Aborigines believe all things flow and the Dreamtime stories tell of how the world was created and progressed. These stories are sacred and children are required to know them by heart before they are allowed to participate in the ceremony that marks their transition into adulthood. “The Beginning of Life” is the Aboriginal creation story, complete with a very cool rainbow serpent and plenty of Australian wildlife. It can be found in Dreamtime: Aboriginal Stories by Oodgeroo.

“Robin Hood and the Golden Arrow” is a classic story that has been popularized by movies and television over the last few decades. It tells about how Robin Hood became an outlaw and then skips ahead to the archery contest where he disguised himself and won a golden arrow, which he used to kill Guy of Gisborne. This tale can be found in The Golden Hoard: Myths and Legends of the World by Geraldine McCaughrean.

“Shingebiss” is an Ojibwa legend about a wild duck that decides to stay in his (Shingebiss has been portrayed as a female in other versions of the story) hut for the winter instead of migrating south to escape the North Wind like the rest of his flock. The North Wind despises living things and freezes them with his breath, but Shingebiss believes that all in nature are brothers and is not afraid of his blustering. Shingebiss finds ways to survive and outsmart him until finally the North Wind decides that being his enemy is not worth the effort. This tale has been made into a picture book by Nancy Van Laan.

“The Silver-Miners” is a Bolivian myth about the time when the Spanish came to look for riches in South America. The story goes that the Bolivian people were made slaves by the Spanish, forced to tear into the mountain Parichata, guardian of Potosí Town, to extract silver. The people cried out to the gods for liberation and one night all the beetles on the mountain congregated at the mine and turned into mules with huge panniers strapped to their backs. Then, all the silver in the mine liquefied and came rushing out to fill the panniers, and the mules took the silver away. The Spanish had to seek out a new source of treasure, and the people of Potosí were left in peace. This story can be found in The Silver Treasure: Myths and Legends of the World by Geraldine McCaughrean.