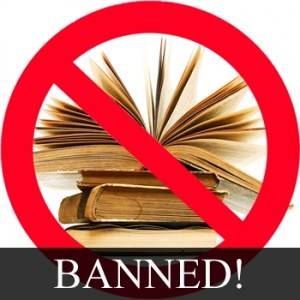 On June 12th, the Cape Henlopen school board in Delaware voted 6-1 to drop Emily M. Danforth’s The Miseducation of Cameron Post from a summer reading list aimed at high school freshmen, citing inappropriate language. The following week, a school board in Pasco, Florida dropped John Green’s Paper Towns from an eighth grade summer reading list after ONE PARENT complained about language and sexual references, an action that bypassed their own book challenge review policy. (I mean, it’s summer, who wants to take the time to actually think about these things, amIrite?) Back in May, a school board in Grants Pass, Oregon pre-emptively banned Sherman Alexie’s Absolutely True Diary of a Part-Time Indian from use next year in a 10th grade English class, because–you guessed it!–there was “bad language on nearly every page.” And lest we forget, last month a Pensacola principal canceled an entire summer reading program after finding issue with Cory Doctorow’s Little Brother, citing language yet again, and, entirely perplexingly, “overtures.”

First things first, school boards: the jig is up. We know this shit ain’t about the godforsaken language. Because the list that The Miseducation of Cameron Post is on? Almost every other book includes words like “shit,” “bitch,” “asshole,” “motherfucker,” “dickhead,” “jackass,” and so on and so forth. Eleanor and Park, also on the list, includes the work fuck probably twice as much as Cameron Post does. Yet no one’s raising a finger about the other books. And Little Brother? Doesn’t even HAVE no curses words!

But you know what Cameron Post DOES have? Lesbians. A lot of lesbians. And you can betcha that Doctorow encourages his readers to question authority, like a lot. Yet, here’s the thing about parents who protest books. As anti-censorship, book-loving people, it’s really easy to make concerned parents into villains, to decry them as ignorant and hateful. But parents have a natural instinct to protect their children, and that’s not wrong. And there ARE inappropriate books for children out there. So when the parent who so hated Paper Towns says, “There’s so much bad in the world. I want to preserve my daughter’s innocence a little bit longer,” sure, part of me wants to yell, “She’s already SEEN bad in the world; you can’t stop it!” But it’s also her right to feel that way. It is 100% her right to feel that way, and it’s her right to not let her child read the book.

But you know who didn’t have the right, though? The Pasco school board. They did not have the right to take it away from every other child in the district, at least without further examination. I know disappointing angry parents is scary, for teachers and for school boards and administrators. But for every parent who wants to yell about a book? There are 10 kids whose lives could be saved by that book. That book might annoy or offend one parent. But it could literally SAVE. THE. LIFE. of a child. Ask a scared, lonely girl who might think she’s a lesbian what it felt like to read The Miseducation of Cameron Post. Just ask. Oh, and? You also have to read the books.

None of the school board members of Cape Henlopen read Cameron Post, although president Spencer Brittingham boasted that after browsing it, he knew in “less than three minutes” that it wasn’t appropriate. Such a stellar example for children of thinking deeply about important issues! Considering that Pasco dropped Paper Towns the Monday after they received the complaint on a Friday, it seems doubtful that any of them read that one, either.

In Grants Pass, though, a month after the board had banned Part-Time Indian from the 10th grade curriculum, every single board member read the whole thing.* And wouldn’t you know, all but one “found the subject matter not nearly as objectionable as they had been led to believe.” They overturned their decision. And hey, school boards? Just this last tiny thing. Once you tell a child they can’t do a thing, they will undoubtedly want to do it just that much more. And there will usually be good folks in the world willing to help them. Doctorow and his publisher, Tor, sent 200 free copies of Little Brother to the Pensacola high school after it was banned. And in Delaware, Browseabout Books is teaming up with AfterEllen.com to provide free copies of The Miseducation of Cameron Post to children who need it. If you’re interested in donating a copy, or would like to write to the Cape Henlopen school board members, you can get the details here.

*Editor’s note: it was the curriculum committee who initially rejected the book, not the School Board. (7/11/14)