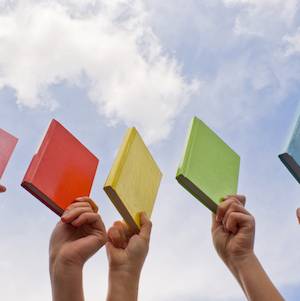 Never judge a book by its cover. We all know this applies to judging people and not actual books, right?

Book blurbs are completely meaningless (and in case you didn’t know that, SPOILER ALERT: the author more than likely shares an agent/editor/plays golf with the famous-name blurber). A few months ago, I realized how much I HATE jacket copy. Big plot points that don’t happen until 100+ pages in are spoilered in those magic three-to-four paragraphs. And sometimes, the jacket copy is a highly-glossed and finely-manicured flap of total shenanigans.

I decided to do a little experiment. For 90 days, I made my reading choices based solely on the book’s actual cover and title instead of the author’s name, what the jacket said the book was “about” (shenanigans, I tell you!), or the author’s photo.

Here’s a rundown, in order, of how it went:

The Book of Unknown Americans  by Cristina Henriquez (Hardcover)

Blue is my favorite color and America is my favorite country. Also, “Unknown Americans” gave me a hint that I’d be in for an immigrant story, and after reading Americanah last spring, I fell in love with stories about immigrants. The Riveras leave Mexico and come to America to seek better care for their daughter, Maribel, after a near fatal accident caused her to have a serious brain injury. They move into an apartment complex full of other immigrants, each with their own story of America. A young neighbor from Panama, Mayor, takes to Maribel and sees beneath her damage the way her own parents do not; she is kind, funny, and wise. On the surface, it sounds like a story of young love, but beneath it all is the story of America. If you’re big on marginalia, get your pen ready for gems like, “…when I glanced at the people around us, no one was even looking in our direction. I felt the way I often felt in this country – simultaneously conspicuous and invisible, like an oddity whom everyone noticed but chose to ignore.” It has something to do with Goodnight Moon, obvi. And I love that book. And I was going to the lake and I needed a paperback. Have you ever wondered if there was a REAL great green room? So this lady named June inherits a dying children’s bookstore (because you know, death of print and book smell) from her great-aunt Ruby. She doesn’t want any part of owning a bookstore, and then she finds all these letters that were exchanged between Ruby and Margaret Wise Brown. Then she has some decisions to make, and there’s a love story in there, too. It was an absolutely delightful book, and ended up being perfect for my lazy lake weekend. I Love You More by Jennifer Murphy (Digital galley)

Three ladies in black, wearing veils, and one of them has a gun. I picked it because I had the feels that this wasn’t your average love story. And it’s not. Oliver is pretty much the worst man on the planet and married three women, and unlike on the TV… they aren’t all shacking up together. The ladies find out about each other and straight up murder his ass. Great plot twists, fun ending. I wanted to rub my face all over it before I read it (because it feels really good), and then when I finished it I wanted to rub my face all over it so maybe some genius would be absorbed in my pores. Social worker, Pete Snow, tries to help a malnourished boy who lives in the Montana woods. He meets the kid’s dad (total nut job) and tries to help. Pete’s own life spins out of control, and he finds himself in the middle of a manhunt. Not only was this the best book I’ve read all year, it’s one of the best books I have EVER read. I smell Pulitzer. Love Me Back by Merritt Tierce (Digital galley)

I said it before, and I’ll say it again: blue is my favorite color. I had just finished Fourth of July Creek and I knew I’d need a humdinger of a followup to avoid the slump. I took a chance with Love Me Back, and I’m so glad I did! It’s beautifully DAAAARK. A young single mother becomes a career waitress, and her story is told through phases and time jumps. If you’ve ever worked in a restaurant, you’ll appreciate it. If you love ferocious fiction, you’ll really dig it. You can see a sort of pattern developing with my reading habits. This just looked like a good blend of intensity. I was ECSTATIC when I started reading, and it’s a sort-of Foxy Knoxy spin-off from the point of view of the victim! Unlike Cartwheel, (which is really awesome if you’ve never read it) it actually takes place in Italy but Crouch puts her own unique spin on the story. Read it in an afternoon. Good pickin’. The Sleepwalker’s Guide to Dancing by Mira Jacob (Digital galley)

I really couldn’t tell what this would be about from the cover, I just thought it looked really cool. And not only was it cool, but it was the first book I ever read that centered around an Indian family (and now I must find MOAR!). See, this is when reading diversely pays off in spades. I learned so much about a culture I thought I was pretty familiar with, got a history lesson, discovered a new writer, AND found a book I can happily recommend to anyone. After a lot of dark stuff, I wanted something happy for a palate cleanse. DID NOT FIND IT HERE. And that is more than OK. Great book. Think “exploration of female friendships” meets “how many bad things can happen to one person in a lifetime?” I think its portrayal of the changing friendship and dynamics between two childhood friends is very honest and intriguing, and the beautiful writing is a big fat bonus. GOODNESS GRACIOUS, GREAT BALLS OF FIRE, Y’ALL! The cover speaks for itself, since it is a big picture of The Killer, and I was interested because I live across town from where The King (that would be Elvis) was born. The Jerry Lee Lewis/Elvis Presley/Sun Studio era of music is SO RAD and I’m not going to pass up an opportunity to read 512 pages of some of the best brand of crazy. It’s as good as it sounds. Look for it in late October. In Real Life: Love, Lies, & Identity in the Digital Age by Nev Schulman

I love that guy on that show and it’s a giant picture of half his face. I was expecting a recap of the first three seasons of MTV’s Catfish, but that’s not what I got! Sure, there’s a little Cat-splain’, but mostly it’s Schulman exploring modern relationships in this crazy new digital get-down world we live in. I found it absolutely fascinating, and I think people who may not watch the show (whywouldn’tyouwatchitssodamngood) will get a lot out of it as well. Reading about his life before the documentary was a definite highlight, and I refuse to spoil the funny. I’m a Greek/Roman history nerd. Enough said. Much to my surprise, this book is about a college athlete, destined to compete in the 2004 Athens Olympics (I love sports). He has an accident and loses his eye, bringing on the expected “WTF do I do now?” conflict. He leaves the country and heads to Berlin to pursue a career as an artist. That’s as far as I got in the book, because my digital galley expired and I couldn’t access it anymore. That’s bad pie right there. The writing is immensely beautiful, and I anticipate hearing a lot about Chancellor in the future! (Also, I must get myself to a bookstore so I can keep reading it until my eyes bleed.)

So what did I learn during my three months of judging covers?

— I seem to be more drawn to book covers of women writers (I know a girl named Smith and a boy named Merritt, so don’t go throwing “subconsciously picking based on gender” in my face, please).

— Authors of color are naturally and seamlessly included. So let’s stop making it rocket science.

Spill it. What books have you judged by their covers?