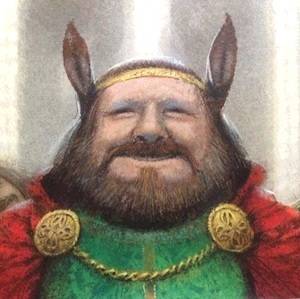 A few weeks ago I wrote about 6 Folktales from 6 Continents that you should read to your kids. As a follow-up to that, here are six more amazing stories from indigenous cultures around the world.

“The Wolf Queen” is a South African story from the Malay-Indian provenance about a beautiful young woodcutter’s daughter named Amina who attracts the unwanted attentions of a creepy old sultan. The sultan wants to marry her, but Amina is in love with a handsome young wazir, so when the sultan comes to take her away she stalls him until she can consult with the wazir about what to do. The wazir gives Amina a wolf’s pelt and a magic ring, telling her to wear the pelt, rub the ring, and recite an incantation the next time the sultan comes around. When she does, Amina is turned into a wolf, but she forgets the spell that will return her to human form. She is captured by hunters and brought to the wazir’s house, but he is indisposed and does not see her. At sundown she remembers the spell and turns herself back into a woman just in time for a dance at the home of the wazir’s brother where she hopes to see the wazir, but he is ill and unable to attend. After the dance she morphs back into a wolf and returns to the wazir’s house. This goes on for two more nights, but each night the wazir is not at the dance. The morning after the last dance the wazir emerges from his sick room to find Amina in wolf form once again and he recognizes her immediately. He kills the wolf, freeing Amina’s human form once again. This tale can be found in Nelson Mandela’s Favorite African Folktales.

In this ancient Chinese mash-up of The Hunger Games and The Chamber of Secrets, a huge serpent lives in the mountains and terrorizes villagers by demanding a tween girl as a sacrifice every year. The villagers offer up the daughter of a slave or criminal for nine years, but in the tenth year a young girl named Li Chi volunteers to be the serpent’s annual human snack. Her parents are against the idea, but she sneaks off anyways with a sword and snake-hunting dog in tow. Instead of falling prey to the serpent like all the girls before her, Li Chi kills it and is made queen of the state for her badassery. This tale can be found in The Moon Maiden and Other Asian Folktales by Hua Long.

The Pacific: “A Calabash of Poi”

This Hawaiian myth has a similar theme to myths told in other cultures. In it, Pele, the goddess of fire, disguises herself as an old hag and stops at a rich man’s house to ask for refreshment. When she is turned away, she visits the neighboring house, where she is received warmly and given much food. She curses the first man’s crops and blesses the second. This story can be found in Fearless Girls, Wise Women, & Beloved Sisters: Heroines in Folktales from Around the World by Kathleen Ragan.

Europe: “The King with Horse’s Ears”

This Irish folktale is about King Labhraidh Loingseach (good luck pronouncing that one correctly) who was unfortunate enough to be born with horse’s ears. The king is so ashamed of his secret that he wears a special crown to cover them and kills every barber who cuts his hair. Soon, all the barbers in the land have gone into hiding and soldiers are sent out to find one to cut the king’s overgrown hair. They find one named Johnny Gruagach and bring him back to the castle in ropes. Johnny’s mother begs the king to spare her son’s life, and the king relents, swearing Johnny to secrecy under pain of death. Johnny never tells the king’s secret to a living soul, but eventually the king’s secret comes out in a rather interesting way and the king learns to laugh at himself. This story can be found in The King with Horse’s Ears and Other Irish Folktales by Batt Burns.

This tale comes from the Wampanoag people of Massachusetts near Plymouth Colony. The story goes that back when the world was young a great giant named Maushop lived with the Wampanoag and loved them deeply. He took care of them and helped them survive in the wild, but eventually the people became too dependent on him, so he turned himself into a great white whale and swam away so they would learn to fend for themselves. This story can be found in The Girl Who Helped Thunder and Other Native American Folktales by James Bruchac and Joseph Bruchac, Ph.D.

This Costa Rican tale is about a young prince and his two older brothers who go in search of a bird with magical healing properties to cure their blind father. The brothers encounter a dead body on the steps of the city church where it has been left without any money for burial. The elder brothers pass by, but the youngest stops and pays for the man to be buried. The next night the spirit of the dead man visits him and offers to guide him on his quest in thanks. After a few adventures the prince returns with the bird, a flying horse, and a princess in tow. His brothers are so jealous that they throw him over a cliff and claim responsibility for finding the bird, but the young prince is lucky when his coat catches on a branch on the cliffside. He returns to the palace, saves his father, and marries the princess. This story can be found in Latin American Folktales: Stories from Hispanic and Indian Traditions by John Bierhorst.