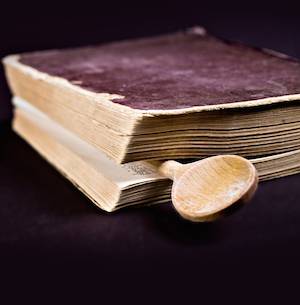 Do you enjoy reading historical nonfiction?

Have you ever thought of reading an old cookbook to satisfy your cravings?

Now you might be wondering, can a cookbook be a historical document?

At my parents’ house, in the room where the book scorpions live, there is a cookbook from 1886. The title is Cookbook for Housekeepers. A Manual to the Current Practices of Fine Cooking and Everything That They Include. This cookbook was first published in 1822 and by 1886 it had been printed in fifteen editions.

The fact that Cookbook for Housekeepers exists tells the story of the nineteenth-century European class system. The book is not intended for the lady of the house, but for the cook working in her kitchen with a kitchen staff.

The lady of the house hardly ever went to the kitchen. The reason for this was that a woman of her social standing would not enter the realm of the domestic staff.

In 1886, cooking was heavy, messy work, centered around a constantly blazing wood stove. This is why each recipe found in Cookbook for Housekeepers has a story to tell.

There is the recipe for gingerbread cookies that requires beating eggs and sugar for half an hour. Nonstop. By hand.

There is the recipe for turtle soup that starts with the purchase of a live turtle. Once back in the kitchen, the recipe suggests poking the turtle in the rear with a hot poker from the wood stove. The turtle will stick out its head from the shell and… You can imagine the rest.

There is the chart of how to identify what kind of poultry to buy. The difference between buying poultry then and today is that back then you bought the whole bird; feathers, feet, head, and giblets included. As in the case of the turtle, preparing the bird for cooking was done in the kitchen.

The person lowest in the kitchen hierarchy made the preparations for all of these recipes. This person was the kitchen maid. The kitchen maid was a young, unmarried girl, either of working class origin or from the lower levels of rural society.

The kitchen maid’s life was not easy. Her salary was low and her hours were long. The first person to get out of bed in the morning, she fired up the wood stove. Under the supervision of the cook, she prepared all the meals of the day, both for upstairs and downstairs. She was the last one to go to bed after doing the dishes, both the family’s and the staff’s. Just as the lady of the house hardly ever went downstairs to the kitchen, the kitchen maid hardly ever went upstairs to the dining room.

Do you have any old cookbooks? What stories do they tell?