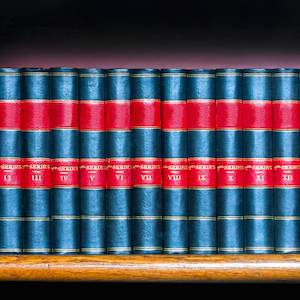 I have never, ever read a series of books out of order, but I just started to, and guess what? I really like it.

Two books from Craig Johnson’s Walt Longmire series have been sitting in my TBR pile for two years now. I had no idea who the author, or series was, and really had no interest in mysteries (till recently!). What saved the books from the ‘donate’ pile are their covers: bright, two-toned renderings matching each book’s intoned titles: As the Crow Flies, The Dark Horse, Hell is Empty, etc. I do judge a book by its cover, and so when I was in a bit of a reading downtime and wanted something new, I started to read – Book 10. Book freaking 10!! And it was so good! Without knowing this guy’s story, or relationship to any of the characters, what trials he’s been put through in earlier books, what his deal is, anyway – I was immediately transported to a freezing cold Wyoming winter, where a child’s murderer is on the run from the law, with Walt Longmire and various Indians, cops, criminals, and spirits taking up the chase.

And here’s how I think reading out of order can work.

Each book as a standalone.

I can see why A&E made a tv show out of this series, as each book contains its own mystery, from beginning to end. But I’m discovering there’s a deep, thoughtful background to the people of this world, and Johnson refers to other books/adventures, so I’m not completely lost. And he doesn’t spoil previous stories: his character’s asides just make me more curious to read back & see what I missed, and how they got to where I’m reading. Series-wise, it helps that each mystery adds a little something to the one after, and fills in some more from the ones prior. And in the later books, there’s been mention of some horrific family nightmare coming for the Longmires. I’m both terrified and completely anxious to get there and read what goes down.

Category ID: 474
Unusual Suspects Newsletter
Sign up to Unusual Suspects to receive news and recommendations for mystery/thriller readers.
Thank you for signing up! Keep an eye on your inbox.
By signing up you agree to our Terms of Service

Reading Book 10, I’m wondering about the relationship between Longmire and his lady deputy, Moretti, mostly because of quick but smoldering looks between the two. In this book things are totally platonic, but when I read Book 3 I was surprised to learn they do in fact have a sexy history. But they’re still friends in Book 10! These are mysteries, not romance novels, (or Sookie Stackhouse romps) so I appreciate that the focus is on the story, not the sex. But when Johnson does decide to spice things up, it’s a well deserved break – for the characters, and readers.

It’s fun to see the characters, so well developed in later books, get introduced in the first books of the series. Equally interesting, as a reader who loves the small details, is watching Johnson figure out how he’s going to put his personal stamp on things-little things like using quotes (early books) or not (later books) when Longmire describes his daughter, The Greatest Legal Mind of Our Time. Or referring to Longmire’s bff alternately as Henry Standing Bear (full name), the Bear (admiring nickname), or The Cheyenne Nation (proud nickname). That last one had me really confused for a while.

Enjoy the flashback-ness of it all.

Walt meeting sexy Lena Moretti for the first time. His budding relationship with Dog, who I thought had been with him forever, but was actually adopted recently. (I’ll assume in the TBR Book 1.) Each time he calls the office and we get to hear Ruby (the Absaroka County Sheriff’s department receptionist) scream at him to get his butt back in. (He doesn’t.) His growing spiritual side, which has him attend a sweat lodge ceremony, figure out his spirit animal, and converse with the dead. All huge developments for Walt Longmire.

Seriously – I could not read Sweet Valley High #100 before #99. I was very upset when news trickled down to my pre-teen self that someone decided that the Narnia books were totally out of order, and The Magician’s Nephew (the one with the origin stories) was supposed to be read first. But that should’ve been a hint for me: I loved getting the background to the Narina worlds well after being introduced to them. Or reading the saga of pre-Bilbo Middle Earth well after the destruction of the ring.

It feels like something akin to blasphemy to try this with other series, but I bet it’s been done, and enjoyed. Anyone read Harry Potter & the Deathly Hallows before The Sorcerers’ Stone? Mockingjay before Hunger Games? A Swiftly Tilting Planet before A Wrinkle in Time? If you have read a series out of order – why’d you do it, and did you like it, too?