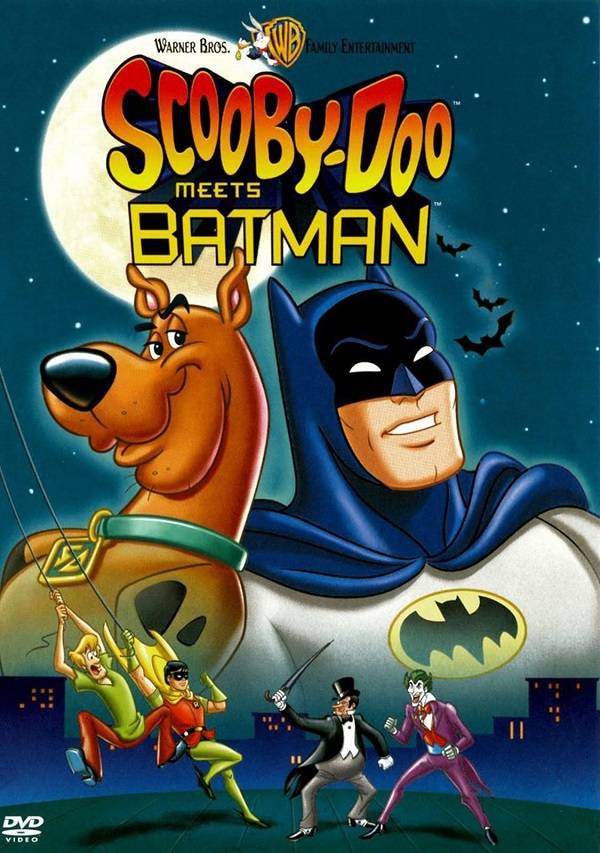 Many times, comic crossovers are brought about because some menace is threatening the stability of several universes and only the most well-known heroes can beat back an epic villain. Sometimes, the stakes are so high that if the heroes falter for even a moment, entire worlds will collapse in upon themselves and all will be lost forever. Entropy will consume everything and everyone will blink out of existence. But at other times, there’s someone passing counterfeit five and ten dollar bills at a small carnival and that’s sort of a hassle for the local economy, y’know? It is these smaller crimes that are usually what bring Batman and Scooby-Doo together.

By 1972, both Scooby-Doo and Batman were well known to children. Batman’s live action series series, titled simply Batman, lasted from 1966 to 1968. A cartoon series titled The Adventures of Batman followed soon afterwards from 1968 to 1969 though reruns kept the same cartoons on the air under the title Batman with Robin the Boy Wonder for several years afterwards. Similarly, Scooby-Doo’s original series, called Scooby-Doo, Where Are You!,launched in 1969 and ran until late 1970. Each story revolved around Scooby-Doo and his human compatriots chasing down people dressed as monsters. Those episodes continued to be rerun for several years. In 1972, a new cartoon series based around the crime solving mutt was released with a whole new concept. Known as The New Scooby-Doo Movies, each episode had Scooby-Doo and the Mystery Inc. gang meet someone or a group of someones from pop culture who would join them for an adventure. The first episode featured the Three Stooges. The second featured Batman and Robin.

This first meeting between Scooby and Batman started off simply enough. The Mystery Inc. gang of Fred, Velma, Daphne, Shaggy, and Scooby-Doo noticed a plane without its lights on landing in a nearby forest. Shortly after the plane landed, Batman and Robin appeared on the scene in their Bat-Copter. They’d grown suspicious when they saw the plane flying without lights and followed it from Gotham City. The case spiraled out from there as the mystery quickly involved plastic punch clowns full of counterfeit money, a disappearing house whose furniture was nailed to the floor, a hooded menace, and a light sprinkling of the Penguin and the Joker.

While the mystery was extremely low-budget (the hooded villain was the only person in the story who wasn’t either one of the heroes or the Penguin or the Joker), it did allow kids the thrill of seeing the Dynamic Duo work alongside Scooby and the gang. In fact, Scooby actually saved Batman and Robin from a trap sprung by the Joker and the Penguin. Truthfully, it wasn’t the World’s Greatest Detective’s finest hour.

A few months after the first episode aired, another of The New Scooby-Doo Movies was released which featured a crossover with the Dark Knight and the Boy Wonder. This time, the only villains were the returning Joker and Penguin, though they spent part of the story in monster suits as a dryad and a troll respectively. Personally, I find the Joker more frightening than a funny looking tree spirit, but that’s the outfit the Clown Prince of Crime picked for himself.

This second time around, Penguin and the Joker were out for bigger game than a handful of counterfeit bills. This time, they were after a flying suit made by an adorable bumbling scientist. Of course, the case climaxed with Scooby-Doo getting in the suit and having some amusing misadventures.

As tends to happen during a crossover, another smaller crossover took place in the middle of the main affair. When it was revealed that the scientist’s flying suit was being held at the Gotham Rubber Factory, the Mystery Inc. gang went there to pick it up. When they arrived, they found several rubber balloons ready for the upcoming Christmas parade. Among them was Santa Claus, Batman, and Robin, alongside a giant Yogi Bear and Fred Flintstone. Seeing all these different characters in the same image is quite the treat.

The animation in these two episodes can kindly be described as “rough”. Characters were routinely off-model, dust littered most frames, cell edges were evident as characters walked away, character’s mouths don’t move during dialogue, and colorists seemed oblivious to continuity. In most scenes, Batman’s neck is exposed for some reason. At other times, Batman’s insignia has its black and yellows switched and his legs are colored pink as though he took off his tights when no one was looking. Perhaps most egregiously, there’s a small scene in which Batman’s body appears to have only been sketched in, he’s lost his glove, and he’s gained a real flashy ring. I can’t even begin to guess what happened here. All I know is that it’s sort of amazing.

After these two episodes New Scooby-Doo Movies episodes, no more crossovers for these two mystery solving heroes were planned. They remained separate, each hunting down the criminals around them. That would remain the case for another 39 years.

Several Batman and Scooby-Doo related cartoons launched in the following decades but never did the pair meet again. That changed during the second season of a show titled Batman: The Brave and the Bold. This series had a light and fun take on Batman, the likes of which hadn’t really been seen on TV since the 1960s’ live action take on the character.

Each episode of the series found Batman teaming up with at least one other DC Comics character. They ranged from appearances by the obvious like Superman and Wonder Woman to more minor characters like Creeper and Rip Hunter. Along the way, the series presented a character named Bat-Mite. A magic imp who originally appeared during the Silver Age of Batman comics, Bat-Mite was a nuisance to the Caped Crusader. He was from the Fifth Dimension and loved everything about Batman. Whenever he appeared, Bat-Mite pushed his hero to greater and greater heights to prove the Masked Manhunter was the best superhero in the world. Often, he did this by posing a danger to Batman or the people around him. Bat-Mite was a hardcore fanboy.

During one episode of Batman: The Brave and the Bold, Bat-Mite presented three different takes on Batman. In the episode titled “Bat-Mite Presents: Batman’s Strangest Cases!” viewers were introduced to a Batman who originally appeared in the pages of MAD Magazine, a Batman based on a 1960s Japanese manga, and the Batman who met Scooby-Doo. In a loving tribute to the two New Scooby-Doo Movies episodes from 1972, Batman again met Scooby and the gang while they all once again took down the Joker and Penguin. Also, “Weird Al” Yankovic was there.

The short cartoon is chock full of references and allusions to the two earlier adventures. Among them are many of the animation gaffs seen in the original episodes. They were lovingly recreated for this new cartoon, including Batman’s inverted insignia and even his weird ring was briefly seen again.

That’s the last time Scooby-Doo and Batman shared the small screen. Recently, the pair got back together in the pages of a new ongoing comic book title. In Scooby-Doo Team-Up, the Dynamic Duo and the teens of Mystery Inc. once again joined forces to fight crime.

The series began with an immediate reference to the original 1972 team-ups between the two franchises as Daphne mentioned that they hadn’t seen Batman and Robin since “our run-in with the Joker and the Penguin!” However, instead of being the nostalgia-fest that was the Batman: The Brave and the Bold episode with its many winks and nudges, the story immediately became something new when the Dynamic Duo revealed they were on the hunt for Mat-Bat, a half-human, half-bat monster. Soon, the group found their quarry in a mall food court.

Before Team-Up launched, Scooby-Doo had been a part of the DC publishing line for over a decade. From August 1997 to October 2010, a comic titled simply Scooby-Doo chronicled the monthly adventures of Mystery Inc. no matter what was happening with any single incarnation of Scooby’s various television shows. The series was relaunched the month after Scooby-Doo ended though it was given the new title Scooby-Doo: Where Are You? and has been ongoing ever since.

The new Scooby-Doo Team-Up is in a series that’s a bit different than Scooby’s solo stories. Labeled by DC Comics as being Digital First, this is a series that is released on digital comics provider comiXology in a different form than in print. Two digital issues of Scooby-Doo Team-Up equals the content found in a single print issue. This means that buying a store copy of, say, Scooby-Doo Team-Up #2 gives you the stories published digitally as Scooby-Doo Team-Up #3 and #4. This can quickly get a bit baffling as you attempt to explain which issues tell which stories, but it apparently makes sense to DC’s editors and accountants. To make matters worse, the digital version of these stories come out concurrently or after the print version, making the “Digital First” designation even more confusing.

Anyway, the second issue of Team-Up found Scooby-Doo meeting Ace the Bat-Hound for the first time. Batman’s heroic dog was quick to take on Scooby as his sidekick when all the humans in the area became poisoned by Scarecrow’s fear gas.

The next adventure continued Batman and Mystery Inc.’s teaming ways, though this time Bat-Mite got involved again. More recently, Team-Up began breaking away from its Batman roots by having Scooby and the gang meet other animated characters. First, they met with the animated television version of the Teen Titans. As they’d already spent a lot of time with a regular Robin, this chibi version was strange to them, though Freddy helped explain the differences away.

Since then, the series has featured crossovers with Wonder Woman and the Super Friends though each issue remains in-continuity with all those that came before it. Here’s hoping it continues for years because this series, written by Sholly Fisch with art by Dario Brizuela, is a ton of fun.

So, the Scooby-Doo and Batman crossovers remain ongoing in comic form. Will these two franchises again meet on television? Since the ongoing comic is so good, I’m not going to be pining for it anytime soon. If you want Mystery Inc. in action with DC characters, seek Scooby-Doo Team-Up out. The first trade is due in November.