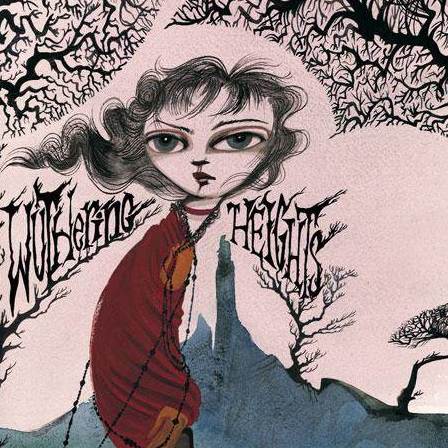 Every October, I consider rereading Wuthering Heights because I just love it so much. I pull it down and, since it is my most-reread book, I think about so many different times in my life, the reasons I go back to it, all that book nostalgia stuff I’m sure we all have for something.

I started writing this post about a week ago, and since then, I found a trove of reading notes in a box, crinkling and cramped against several rough drafts of poems I wrote for Gifted & Talented in high school (it was a small school, and I was the most vocal aspiring writer). I burned my journals from 1997-2002, so seeing that purple gel ink and that perpetually in-transition handwriting (I tried to change my handwriting every summer, and sometimes over Christmas breaks too; I don’t know either) made me feel like I needed to change the entire direction of this post. Apparently, I found the notes several years ago, as I’d added more to the stapled, yellowing, wide-ruled pages.

Here, lightly edited, are the relevant snippets of the notes I found. I’ll stop short of sharing the angsty poetry. Or maybe I won’t. I haven’t decided yet.

December 1998
A guy gave me this book and even though he never said so, I assume that means he likes it a lot, so now it’s my mission to make it my favorite book. (It will honestly be hard—I’m so embarrassed to admit this—for anything to replace the Sweet Valley Super Editions.)

The book is a classic, and we don’t actually read books in our English classes (just excerpts in these big hardcover collections. anthologies, I think they’re called?), so it will be one of the first I’ve read. That’s a little sad since I’m fifteen freaking years old! But whatever, maybe I’ll like it. Maybe he’ll like me if I like the book.

Oh! It’s Wuthering Heights, by the way. Written by Emily Jane Bronte. Some sort of tragic love story where these two soulmates are torn apart by their circumstances or something. Two things:

1) How sensitive must this guy be if (again he didn’t say) this is is favorite book? How romantic?


2) Why would he tell me to read it—give not lend me his copy if he didn’t like me? Maybe he thinks we’re doomed soulmates. Our circumstances do really, really suck.

I read the book. It made me cry, and a book has never done that before. Well, Lurlene McDaniel books are supposed to and that was fifth grade anyway. I don’t exactly know why this one made me cry. Everyone is pretty awful to each other, honestly, and you don’t really like any of the characters. On the other hand, though, you really want Heathcliff and Catherine to be together.

They’re obviously obsessed with each other (bad) but they understand each other too (good). But whatever because how many people’s version of love would actually make sense to anyone else? Maybe we should aspire to be that devoted to another person. But what do I know? It’s looking like I’m never even going to kiss anybody, let alone the person I really really want to kiss. LET ALONE feel like they’re the foundation of my being. I feel that way about *him* a little bit, so that’s probably why I’m not more freaked out by Heathcliff: because I would kill for a sliver of his (*his* not Heathcliff’s) attention. You know?

Plus it would be better for everybody who could ever possibly get mixed up with Heathcliff and Catherine (poor Lintons) if they just paired off and never left Wuthering Heights . . .

So those are some of my thoughts. I found out Kate Bush has a song about the book so I’m gonna buy the album it’s on ASAP. And I’ll tell *him* about it too! Maybe he’ll think it’s cool. And that I am by association. HAHA yeah right.

January 1999
Finally talked to *him* about the *book*. He said I was smart so maybe he does like me. Maybe? I tried to talk to my friends about our whole situation but they don’t read much (they’re cool and play sports!) and also I really shouldn’t like this guy so I don’t want to risk spilling the beans to them about my ~*crush*~. Because it will crush me, and he won’t even care if I haunt him after I die of embarrassment.

December 2000
I decided to read Wuthering Heights again over the break. We had a ruthless and brutal ice storm that tore down trees and knocked out power for several days. I ended up reading it by windows during the day and a few candles at night. It was creepy and felt right. When I told *him* about the experience, he agreed. He said he loved (loved!) that I would do a thing like that and that he didn’t know anybody else who would. I did not ask him if his girlfriend would think of stuff like that or if she’d ever read the book. Mostly I pretend she’s not real. I’m trying to get over him but it’s so freaking hard to just make yourself do a thing like that. Which is why I maybe identify with Catherine a little bit. Anyway what if I give up on him and then I suddenly get my chance, right after I don’t want it anymore?

October 2003
I wrote my first research paper as an official English major on Wuthering Heights. Even though *he* hasn’t crossed my mind in a couple of years, I still wondered what he would think of where I am now and my changed opinion of the book. Here I am, writing about the book he gave me, my first classic novel, which made me want to be an English major in the first place. I guess I’ll always associate it with him even when I don’t think I’m thinking about him.

October 2014
Every year, I take Wuthering Heights off my shelf and remember. I remember being In Love with the man who gave it to me. I remember everything that happened between us in the years after he gave me the book and before I went away to college. All of that is minor compared to the Heathcliff and Catherine-level—but healthy I swear—love for literature that book unleashed in me.

If *he* were to read this, I would be ashamed if he thought he could take credit for the direction my future took. I mean, it’s not that I didn’t want him to be tied to that when I was fifteen, eighteen, nineteen. I never told him I already had a copy of Wuthering Heights and Jane Eyre (another time!) on my shelf and he just gave me a push to read it sooner.

I gave away his copy ten years ago. I gave my love away too. And I probably won’t be rereading the book this year.

Readers, do you have these books?