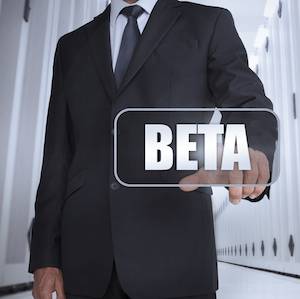 Everyone knows the typical romance hero. Brooding, possessive, domineering. A man who pines for the heroine so hard that it physically pains him to the point where he should see a doctor. Or maybe a psychiatrist. We call this an Alpha, as in Alpha male (not exhaustive for just werewolves, by the way). Or if you’re feeling colorful, an Alphole. But these types, while they may make up the bulk of romance heroes, are not the only ones out there.

The Appeal: Betas are usually a more mild-mannered type of hero. No bursts of unwarranted jealousy from these guys. For the most part, they’ve got their stuff together, and their relationship with the heroine is more complementary instead of built on constant conflict. Betas are comfortable with themselves and where the heroine is at in her life. They’re just sweet, considerate guys who you want to bring home to mom and dad.

While trying to pin down the defining characteristics of a Beta is difficult, I would say they’re more diverse in their characterization than their Alpha counterparts. But they’re well-adjusted, which is often needed as a palate cleanser after you get done reading a book where a hero busts into the heroine’s room in the middle of the night because he just HAS to have her. Because that’s a thing that normal people do when they’re interested in someone. Just kidding. Though let it be noted that I have a healthy love of both Alphas and Betas, though apparently Gammas are now a thing and I’m still trying to come to terms with what those are.

Though I think most importantly, Betas are confident. Maybe not outwardly so, but they’re secure. They may have careers. They may be single dads. They may be relatively free of any crippling emotional baggage. Regardless of their backstory, the thing I always enjoy about Betas is that they’re probably the most respectful. Sometimes, readers need a break from the slut-shaming heroes who eventually see the error of their ways, after sticking their foot in their mouth so much that they’ve chipped a few teeth.

The Pitfalls: As you can see, it’s difficult to describe a Beta without making him sound well…emasculated. No one wants to read about a wet blanket hero. Crafting the right blend of traits is tricky to ensure that a heroine would want to “fall” for this hero and that readers would become invested enough to follow their story. Who knew that creating a sane, well-adjusted hero could be so tough? Recommendations: The Madness of Lord Ian Mackenzie by Jennifer Ashley. Given the tortured hero of this historical romance, it’s hard to believe he’d fall into the Beta category. Lord Ian Mackenzie has spent time in an asylum for what would now be diagnosed as Asperger’s Syndrome. I’m going to go on record and say that he’s probably one of my favorite historical romance heroes. He is flawed with his own brand of quirks and eccentricities. Ian’s relationship with the heroine is full of patience as he acclimates to the new feelings and new experiences of being in love, eschewing the emotional detachment he’s had to learn to live with while growing up. Attachments by Rainbow Rowell. While not an outright romance in the usual sense, Attachments does fun epistolary things when it comes to building characterization. For most of the book, our characters communicate via their computers at work. Lincoln, the hero of the story, is crazily intelligent and he’s always acutely aware that he’s lacked direction in life. He’s a great communicator with Beth and, through their conversations with one another, they both come to learn a lot about each other and themselves. By the time they actually have any physical contact, you’re practically white-knuckling the pages. Flat-Out Sexy by Erin McCarthy. I’m a sucker for sports-themed romances and McCarthy’s Fast Track series is one of my favorites. The heroine, Tamara, is in her early thirties, widowed, and with children. I remember being so skeptical when I first picked it up, given that her love interested is six years her junior and a racecar driver. But it works. It works so well. Elec is laidback and exudes a quiet confidence, helping Tamara overcome her reservations about getting involved in a relationship again, especially with a younger man. Plus, Elec’s scenes with Tamara’s children will warm the cockles of your heart.

I’ve touched the tip of the Beta hero iceberg, so tell me some of your favorite Betas in romance!