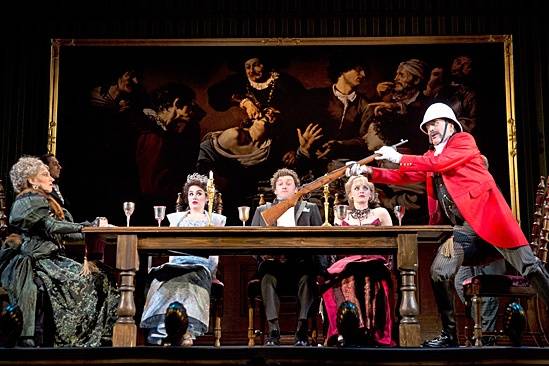 Welcome to the official Panels The Walking Dead weekly recap! I did these recaps occasionally for iFanboy back in the day, and I am thrilled to be bringing them here to Panels. In the discussion, please be mindful of spoilers from the comics, let’s let everyone get their reveals the old-fashioned way.

Looking to catch up? Check out last week’s recap of the season premier 05×01 – No Sanctuary!

This week’s episode opens with the most exciting thing imaginable: slow motion walking. It happens three or four times before the credits, so I’m guessing it’s a thing now.

Michone gleefully kills a nearby zombie to which Abraham makes a cryptic comment to Rosita about that being why they’re waiting for “their moment.” A bit ominous, to be sure, and a callback to their machinations last week. Something is definitely up with them.

Tyreese and Carol fill water bottles from a creek. Knowing the number of rotting bodies around, maybe not a great idea. Tyreese seems to have forgiven Carol for her prison murders, and the murders of the girls, and wants her to come partially clean with the group, since a few of them already know anyways. Rick also talks to Carol about her various murderings, but actually gives her credit and asks her blessing to join her on the road. It’s actually a nice moment.

Then Carol and Daryl don’t talk. Talking is for wusses and episodes from Season 2.

Daryl Spider-sense tingles with the feeling of being watched, but they can’t find any evidence of a stalker. Abraham wants to head north once they find a road, Rick agrees. Bob and Sasha are a couple now in the cutesy/lovey stage of their relationship. Tyreese seems happy about it, a refreshing take.

Someone screams for help in the distance amidst walker growls, Carl is the first to run off to their aid, and the group follows. How long has Carol had a trench knife? As if she couldn’t get more badass. The rescued party, Gabriel, wears a clerical collar and vomits in gratitude. He has no weapons except faith, the group is skeptical but in this instance he was actually right. Rick pats him down and goes through the standard questions they used to use to grant access to the prison. He claims he hasn’t killed anyone, living or dead. Rick’s skepticism grows. Gabriel leads them to his church, while also claiming not to be the group’s stalker. He tries to joke about it, and it does not go well.

Church appears real enough. Episcopal in denomination. The gang searches the building, each finding something kind of creepy: Carol finds a handwritten copy of the first bit of the Bible. I’m going to consider that NOT a good sign in regards to sanity. Rick finds lots of cans of paint. Glen finds multiple paintings of the burning bush on a wall near a needle point of Galatians 6:9. Abraham found a bus that he thinks they can fix up and get on the move. Michonne wants to take a breather and recollect supplies. Rick agrees, and Glenn brings down the hammer on Abraham’s antsiness, everyone else follows suit. Slow your roll, Abe.

Gabriel tells them about the one place he hasn’t scavenged yet, a foodbank back in town that’s overrun with Walkers. Rick preps a scouting party. Carl stays behind at the church to help Tyreese protect Judith. Rick really hammers home the point that Carl isn’t safe. Right before leaving him behind. PARENTING.

During the scouting mission, Rick admits to Bob that he’s not sure if he really wants to go to Washington, DC. I don’t blame him, not my favorite city either, even before the apocalypse. Bob believes Abraham is going to make it happen, even with Rick’s uncertainty.

Carol and Daryl continue to not talk, but this time with a bit more feelings.

Maggie, Glen, and Tara scope out a gun store. Glen trips, but at least he found some silencers (not a real thing, actually suppressors, but no big deal).

At the foodbank, they find the food and the zombies in a sinkhole, filled with water from the rain. If there’s one thing this show does well, it’s the disgustingness of zombies in water. They have to go into the hole to get the food. Gabriel freaks out, can’t tell if it’s because he knows one of the zombies or is just not good at this. I really like watching when the group gets in a groove, coordinating their zombie slaughter like a true unit. It’s fun to see occasional glimpses of competency. Bob doesn’t notice an obvious bubbling under the water and very nearly gets bit by the most rotted of the bunch. Definitely my vote for zombie kill of the week.

Gabriel tries to apologize for the freak out, but Rick cuts him off realizing that he obviously knew one of them. No big deal, it happens.

Rick and Michonne talk about her lost sword, I honestly forgot that she didn’t have it anymore. Kind of a bummer, hope she gets it back.

Carl has been exploring the church, finding evidence of attempted forced entry. He has taken his father’s words about not trusting the preacher. Especially since someone carved “You’ll burn for this” on the side of the building.

During their celebratory feast, Abraham proposes a toast. “To the survivors.” Everyone enjoys some leftover sacramental wine, except Bob because he’s responsible. Abraham then challenges the notion of mere survival, going to Washington could mean a permanent fix, and that’s way better than survival. It really feels like he’s a giving a sermon, very appropriate given the setting. After Judith gives her blessing, the group agrees.

Bob does his “one more” kiss routine. Feels more somber than before. I’m guessing that dude got bit.

Gabriel is chugging communion wine by the bottle as Rick confronts him about obviously hiding something. Rick doesn’t ask what it is, he just says that if it threatens his people, his new family, he’s going to kill him.

That night, Carol tries to jumpstart the car she and Daryl found earlier. Daryl finds her just in time for another car with a cross on the rear window to speed by. What is going on? Daryl recognizes it as the car that snagged Beth last season. He busts out the lights on their car so they care follow without being noticed.

Bob walks into the woods, unable to hold back the tears, but gets knocked out before he can off himself, which he was obviously going to do, and the scene ends zoomed in by a gouge mark in a tree. And would you look at that! Guy Tyreese failed to kill last week was the one who knocked him out, and creepy leader from Terminus, Gareth, is there as Bob wakes up. Bob is tied to a pole near the fire. Not a great sign. Gareth monologues amidst cutscenes of the group, including Gabriel holding a photo of the woman who became the zombie that caused his freakout at the foodbank. Gareth uses the word “hunters” a lot, presumably because he wants you all to buy Volume 11.

Bob finally looks down and realizes he has no leg, because the Terminus folks are eating it. End of episode. I wanted to put an exclamation point there, but it’s so telegraphed that I couldn’t be bothered. They don’t actually say that Bob was bitten either, but c’mon, if you’re not at least assuming that then you weren’t paying attention at all in which case you really do need this recap. I’m glad to be of service

This episode felt like a departure from last week, where we had so much forward momentum. A lot happens in this episode, but it feels like setup for next week, or maybe even the rest of the season. The premier pulled a fast one on me, I thought they were going one way, then they went another but this week they went back to where I thought they were going, and I’m glad for it. The arc they’re decidedly hinting at is one of the darkest arcs of the entire comic series, and I can’t wait to see how they handle it, but unlike some outlets I don’t think it’s going to be the drama the lasts for the whole season given what we saw in the opening. I’m doing my best to be coy, but I probably shouldn’t say any more, so I’ll just end it here and ask you, dear reader, what did you think of this week’s episode? Let’s talk about in the comments!