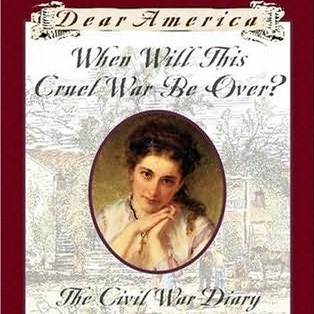 There were a couple very specific things I loved as a nine-year-old when it came to books. Book It was a big deal—personal pan pizzas and reading. Yeah Man. I remember the day we had the book fair in the library—that was when I first bought a Caroline B. Cooney book. I believe it was Flight #116 is Down, which blew my mind in its dramatic violence and bold tragedy. But I really connected with the Dear America series, which, in my preteen head, had a great adult quality to it. People died in these books. They fell in love and lost their families. I could sense the distress of the female writers in historical settings. I started my own diary and waited for the inevitable tragedy that would make my written account fascinating. 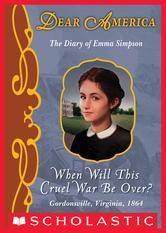 I first loved Dear America: When Will This Cruel War Be Over? because it was Civil War-focused, which was a primary theme in school at the time. In this novel, the main character is left during the war with the other women of her family while the majority of men leave. We see her sense of struggle as the war proceeds around her, but also without her. This is alienating, this is what it is to be powerless, and to be a woman during the Civil War. Suddenly, gender roles became a bit clearer. 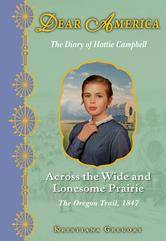 Then there was Hattie Campbell’s diary, Dear America: Across the Wide and Lonesome Prairie. I came to hold my diary tighter than before since Hattie lost all of her belongings in her trek except her book of her own writing. I remember reading this one while sitting on the brick of my bedroom windowsill and wondering over the fact that the Oregon Trail was far rougher than the Oregon Trail video game could expose.

I am marked by these books, altered by them. I have memories of scenes that exist entirely on the page and in my head, but never in reality. I found solace in the fact that the girls in these books seemed absolutely normal in their time period, but could take on so much in their lives. There’s simply something amazing about finding humanity in fiction.

In college, I went looking for these books again in Barnes and Noble out of pure sentimentality, but they had been pulled from the shelves. In 2010, they were brought back in and some were rereleased, though sans the old ribbon bookmark. But though those ribbons are gone (Which I can say I was a huge fan of ribbon bookmarks back in the day), I’m still relieved: relieved that historical fiction can have the audience I used to belong to, relieved that I found a set of books that helped me bridge the gap of maturity into young adult and mature fiction. Every major reader remembers that book that helped her slip from childhood to adulthood (or at least somewhere in between) without the influence of parents. And this is important. The fact that I chose these books and fell in love with them entirely on my own is a necessary detail here. I remember Mom wishing I’d pick something denser, something longer, something that I wouldn’t finish in just a couple days. But Dear America became my focus, regardless.

So why talk about this now? I thought of this old favorite series while reading a blog post of Rosemary Hathaway’s—a professor of Young-Adult Literature. She noted, “A child, even the smallest one, is filled with thoughts you can’t know.  Instead of balking at such a thought, let’s embrace and encourage the complex, private mystery that is reading.” As I think about my mother and her reaction to Dear America books, I realize how lucky I was to have a parent who didn’t worry about how much sexuality or violence was apparent in the Dear America series– she didn’t bother to check. Instead she wanted me to hop right into the next thing, the next read, the next adventure (even if it was more scandalous). She wanted me to get to know my next heroine. And this is my greatest relief.

What book, or book series, helped you grow?