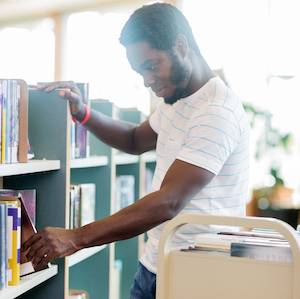 When I was little I wanted to be a doctor, and imagined myself sweeping across continents providing invaluable medical assistance as part of Doctors Without Borders. I came to accept that I’m a writer, not a medical professional, but now I have an opportunity to realign those early dreams with my actual life: I’m interning with the coolest group I know of – Librarians Without Borders. Same basic concept, slightly different product.

Librarians Without Borders (LWB) originated as a student project dreamed up by Founder and Co-Executive Director (and my lovely internship advisor) Melanie Sellar, who was then attending library school at the University of Western Ontario in Canada. Now coming up on its ten year anniversary, the nonprofit is on a mission to “improve access to information resources regardless of language, geography, or religion, by forming partnerships with community organizations in developing regions.” The goal is a global society where all people have equal access to information resources. To that end, LWB has partnered with three groups to promote literacy, libraries, and learning.

The Miguel Angel Asturias Academy in Quetzaltenango, Guatemala is LWB’s longest running partnership. LWB student groups and volunteers work in the Academy’s library, bring books, and provide research into best practices that help expand the library’s collection, programming, and services to assist even more community members. There is a significant lack of access to books for most Guatemalans, where 75% of the population lives in poverty. Getting children excited about books is a work in progress, and the idea of a lending-library is making its first inroads, here in the 21st century. LWB sends groups from their Canadian student committees (codename: “boots on the ground”) on volunteer service trips, and in 2013 worked with the group to transition the library from non-circulating to “one where students and staff can check out books and bring them home.” And all the hard work paid off: in its fourth year, with the help of an on-site librarian funded by LWB, the kids of Asturias went way past a modest reading goal of four books per year, topping off at average of 14. As of 2013, the library had over 3,200 reference materials to help improve students’ learning, and is taking Asterius teacher recommendations into consideration to obtain more.  It’s giving new life to the old catchphrase, Reading is FUNdamental.

Librii, formerly Libraries Across Africa, is a nonprofit that Kickstarted a successful campaign to fund a digitally-enhanced, revenue-generating library in Accra, Ghana. Librii was founded not by librarians but computer engineers, architects and anthropologists from Rice University, and their goal is to deploy the physical library structures, with digital components, throughout Africa. LWB doesn’t build the libraries, they lend the expertise “to assist in shaping the nature of the library and defining the role of the librarian.” LWB helps research necessities like library space issues, ways the group can work to support a culture of reading, and emerging forms of collection development for the nascent library system. Librii is still fundraising towards its goal of deploying its first library in Ghana: an awesome re-purposed shipping container model they hope to have in place by the end of this year. It’s just one small step on a continent where, according to Librii’s research, more than one billion people live, but less than 20% have access to broadband internet, and with it, instant information. But imagine the possibilities.

And LWB’s newest partner, Limitless Horizons (Saber Sin Límites) Ixil serves the community of Chajul, Guatemala, a mostly indigenous village of  subsistence farmers. In Chajul, 93% of residents live in poverty and the community still struggles to overcome the violence and genocide of Guatemala’s devastating 36-year civil war. LWB helps support Chajul’s Community Library, which opened in 2010 as the first and only community library in the area.

Librarians are researchers and information champions, first and foremost, and LWB’s strength is in its partnerships, where project-based learning is the fun, interactive, service-oriented way to spread the information love. What that means, for us three lucky interns from San Jose State University’s School of Information, is providing assistance to LWB’s partner programs in Ghana and Guatemala, researching best practices for start-up, rural libraries in developing areas, promoting the programs through social media bolstering to spread the word (and raise the capital), and basically doing everything we can to help LWB support their programs and goals.

As of 2013, LWB had 1,325 members over 75 countries, including Angola, Morocco, Tanzania, Sri Lanka, Colombia, Czech Republic, and Zimbabwe. Most connect through LWB’s website, and become dedicated volunteers hell bent on propelling LWB forward through its mission statement.

LWB’s tagline is: Putting information in the hands of the world. It’s a simple concept that takes a lot of hard work to achieve. Just another cool thing librarians do.