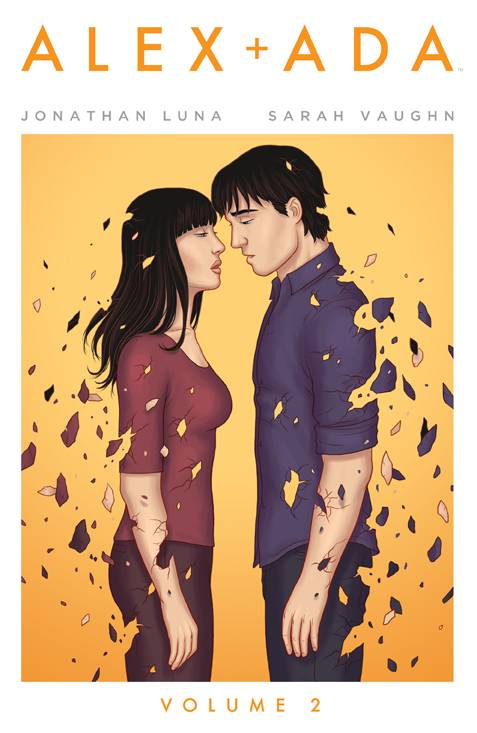 Every week, a different Panelteer will give you a rundown of the comics they’re most looking forward to for the week. Floppies, trades, and omniboo are all fair game here. This week, Dave Accampo tells us what’s on his pull list.

Right off the bat I’m cheating on this pull list because I buy Alex + Ada in issues, but it seems to me that not enough is said about this book, so this is my pull list, and I’m gonna show some love for the second collection of Alex + Ada. I’m not sure why this falls under the radar; maybe it’s because it’s familiar territory — Ada is a robot, can Ada have feelings like a real person? — but Luna + Vaughn have found a way to make the love story of Alex + Ada fresh and interesting while giving us a really solid month-to-month serialized story. So go check it out, willya?

All New Hawkeye launches BEFORE the previous series even finishes, but… I don’t think anyone cares because the Fraction/Aja series is so idiosyncratic that it really seems more like a creator-owned thing than part of some larger clockwork universe. And while Fraction and Aja will be missed, I do love me some Jeff Lemire AND Ramon Perez, and i’m really curious to see what this pair has cooked up for Clint Barton. You might say I’m quivering in anticipation. (sorry.)

The second year of the book begins. I’ll admit I’m getting confused with all the variations of the transdimensional characters running through this book, but Matteo Scalera routinely makes this book so beautiful that it melts away my confusion. Curiosity here — according to the cover, it looks as though stellar color artist Dean White has been replaced by Moreno Dinisio? I don’t know if it’s just for this issue, but those are some big, colorful shoes to fill. White’s color art is a big part of the appeal to the book for me.

Jeff Lemire. Dustin Nguyen. And a whole lotta WOW. I actually had a chance to read this one early, and… look, just get on the phone with your comics shop now and have them hold a copy for you. Dustin Nguyen’s art is beautiful, and the story is intriguing right from the art. There’s a bit of mystery, a boy robot, and bounty hunters. What more do you need?

I’m still on the fence with this book, but I’m thinking I’m gonna give it one more shot. I don’t really care so much for the JL3K core members, but this book also has Booster Gold, Blue Beetle, Ice, Etrigan the Demon, and now Fire. So, as a JLI fan from back in the day, I kinda feel like I need to buy it with the unyielding hope that eventually they’ll just kick out the future leaguers and just let this be a Giffen/DeMatteis “Superbuddies” reunion book. It could happen.

I’ve been enjoying this take on Hellboy’s young adult life, where he’s a bit less trusted by his teammates. And the Alex Maleev art (with Dave Stewart colors) is just gorgeous. Between this and Dustin Nguyen’s Descender, this is looking like a stellar week of comics art!

I enjoyed both Star Wars and Darth Vader, so I’m intrigued to see what Mark Waid and Terry Dodson can do with a Princess Leia mini-series. I’m going to give it a shot. From the previews, I do like that this picks up from the final scene in the first Star Wars film, and then pans around to get the reaction from some of the X-wing fighter pilots. It looks as though Leia’s role as princess and leader might be put through its paces here.

Finally! With new artist Stjepan Sejic, I’m excited to get back to enjoying our regularly scheduled Rat Queen Adventures. I have to admit that I’m not quite sure I can remember where were last left off (before the one-shot special), but I look forward to diving back in.

There might be a #5 on the cover, but I’m looking at this as an opportunity of Dennis Hopeless and new artist Javier Rodriguez to win me over with a #1-Redux. Yeah, I didn’t care for issue #1’s spider-verse tie-in, or the Greg Land art, but with issue #5 it look like we’re getting another jumping on point, along with some new duds for Jessica Drew, so I’m definitely giving this one another try.

So that’s it for me. What’s got you excited this week?

Comics in your inbox? With our newsletter The Stack, you can receive a roundup of the best and brightest posts on Panels every week. Subscribe now!