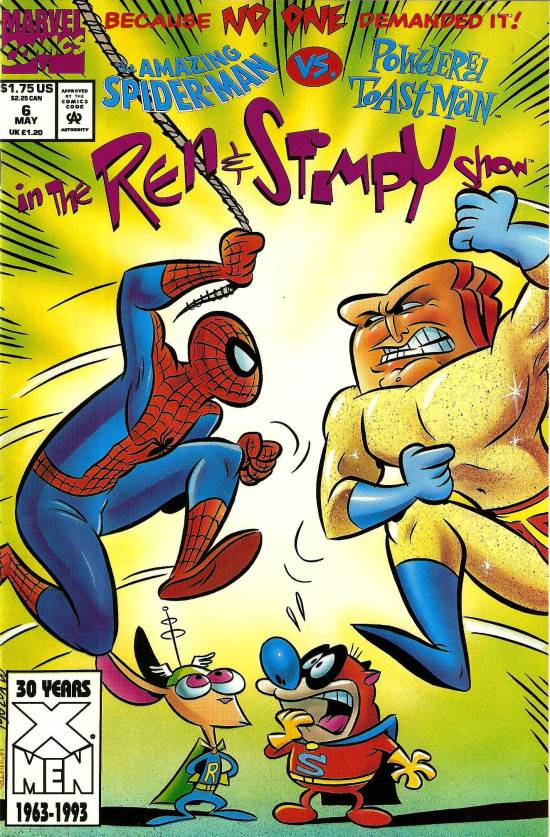 Ren and Stimpy hold a special place in the heart of children who spent their Saturday mornings in the early 1990s glued to Nickelodeon, ready for whatever the First Kids’ Network deemed worthwhile to see. In between episodes of Rugrats and Doug was a strange, violent, vulgar show about a chihuahua and his dumb cat friend. Ratings made The Ren & Stimpy Show a hit early on though the creator of the show, John Kricfalusi, was almost constantly fighting with the network censors as to what he was allowed to put on the air.

In the middle of the second season, Marvel started releasing a comic series using the The Ren & Stimpy show license. The series lasted 44 issues which is a solid run by any estimate. It even outlasted the series’ first-run Nickelodeon episodes by several months. In the sixth issue of the series, something happened that never happened again throughout the rest of its run: A Marvel superhero guest-starred. In this one issue of the series, Spider-Man showed up to battle Powdered Toastman.

The story began simply enough with Ren and Stimpy upset that they had run out of Powdered Toast™. When they called on their favorite superhero, Powdered Toastman, for help, Spider-Man appeared instead and made them breakfast with his web fluid.

The question of whether Spider-Man was in Ren and Stimpy’s universe or vice versa never came up and the story is better for it. Crossovers who take themselves too seriously spend a lot of time trying to figure out the logistics of their continuity when it’s easier to just have a guest-star swing in with little to no explanation. If it’s good enough for the various times Superman met Spider-Man, it was good enough for Ren and Stimpy.

Before Ren or Stimpy can eat their breakfast, Spider-Man got a signal from Powdered Toastman’s spare pair of elasti-shorts that his fellow hero is in trouble. He swung off, leaving Ren and Stimpy to eat their meal in peace. They barely appear in the rest of the issue.

When Spider-Man arrived on the scene, he discovered Powdered Toastman had been mind-controlled by his nemesis, Dr. Dough-Naught. After poking fun at the various sales gimmicks found in comics at the time (team-ups with Venom, spider-armor, and glow-in-the-dark covers), Spider-Man jumped in to help.

He soon found himself overwhelmed by Powdered Toastman’s attacks of corrosive croutons, raisin punches, razor sharp toast, and a giant booger. When all seemed darkest for Spider-Man, he remembered the people who needed him most: his aunt and his wife. Then, things spiraled.

It was clear even in 1993 that Dan Slott loved Spider-Man, cliches and all. Slott’s comedy was gentle but absurd. This wasn’t a take down of Spider-Man but a loving send up. And while I haven’t read every issue of Spider-Man that Slott was written in the last several years, I don’t recall him ever falling back on the habits of other Spider-Man writers that he’s poking fun at here.

But seeing as how this wasn’t Spider-Man’s story, he had to take a back seat while Powdered Toastman saved the day.

The story ended happily with Powdered Toastman proving his superiority to his more famous co-star. However, there were a few pages left and suddenly, everyone involved seemed to remember that the name of the book was The Ren & Stimpy Show. The cat and dog duo returned for a few silly backup pages where they shared some more time with the Friendly Neighborhood Spider-Man.

This was the only time Spider-Man took the time out of his busy schedule to hang out with a talking neurotic dog and a dumb cat. In fact, no other guest-stars appeared throughout the course of the series. This turned out to be the only time Ren and Stimpy crossed the streams. It was too bad we never got to see them meeting up with, say, the Pet Avengers. I bet Frog Thor would have made an interesting guest-star. Perhaps we’ll see that one day, if we’re lucky. For now, we’ll have to be satisfied with just this one issue.