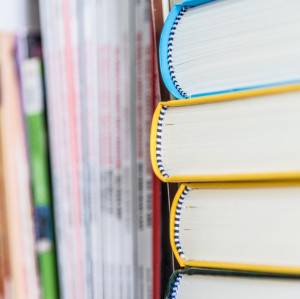 On Sunday, April 12, in preparation for the BYOB Book Drive on April 23, I took on the challenge of downsizing my book collection. (Read more about why in Part 1.) Using Marie Kondo’s The Life-Changing Magic of Tidying Up I deep-cleaned my shelves by more than half, by holding every single book I own in my hand and asking myself, “Does it spark joy?”

Starting the process was more of a hurdle than I thought it would be. I had four bookcases, all double-stacked, split between two rooms. Kondo tells you to put literally every book on the floor and sift through them that way and I was trying to stick to instructions, but getting all of them all together at once felt both impossible and crazy-making. Instead, I split them into categories: hardcovers, then mass markets, then finally trade paperbacks (which were the bulk of my collection by far).

The hardcovers were trickier than I thought they’d be, because so many of them were signed. I am, by profession and character both, incredibly reluctant to give up a signed book regardless of whether or not I am still in love with the book itself. Add to that a self-consciousness about hurting authors’ feelings by giving up their books (As if they would ever know! As if they don’t have shelves of their own to clean out!), and it felt like pulling teeth. Or rather, pulling out signed pages. Because that is what I did: for books I couldn’t see keeping but didn’t want to lose the signature, I ripped out that page.

I KNOW. It’s blasphemy. But in my defense, I present to you the following: 1) These books are being donated to charity, not resold, so the long-term value of the book doesn’t matter; 2) Most books have multiple title pages, so I wasn’t removing any information that wasn’t repeated; and 3) I did it really, really carefully. And from those pages, I will make a hand-bound album of autographs, and it will be a thing of great beauty and joy forever and ever, amen.

On to mass markets! This was easier. WAY easier. They aren’t collectibles and are the cheapest, so my emotional and financial investment in them was significantly lower. I did have a bunch of signed ones, but we’ve already established my technique for dealing with that. And then I took a break, because next was trade paperbacks, and there were just so many. 489 of that original 794, to be exact. Just getting them all into the same general area took 30 minutes.

But by this point my sense of “joy” was pretty well-defined, so I actually did myself a favor in saving the biggest category for last. If I was using my typical rationalizations for why or why not to keep a book, it would have taken forever. But using my gut emotional response to decide whether or not to keep it meant that almost as soon as I picked it up, I knew which pile it was going into. Even for galleys that I knew almost nothing about, I had a knee-jerk sense of whether or not it would actually get read, or if it would feel exciting to have on my shelves.

And at the end of the day, after I washed off all the dust and had tidied the giveaway stacks and gotten over the sheer shock of reducing my book collection by more than half, I felt good. Now I can actually see what I have, and don’t have to take half of the books off a shelf to see what else is hiding behind them. Now I can see the ones I had promised to read, or been dying to read, or had been sent a personalized recommendation for. And as hard as it is to give up some of them, it is equally fun to imagine who might discover them next. When you know you’re sending them to a good home, it’s easier to wave goodbye.