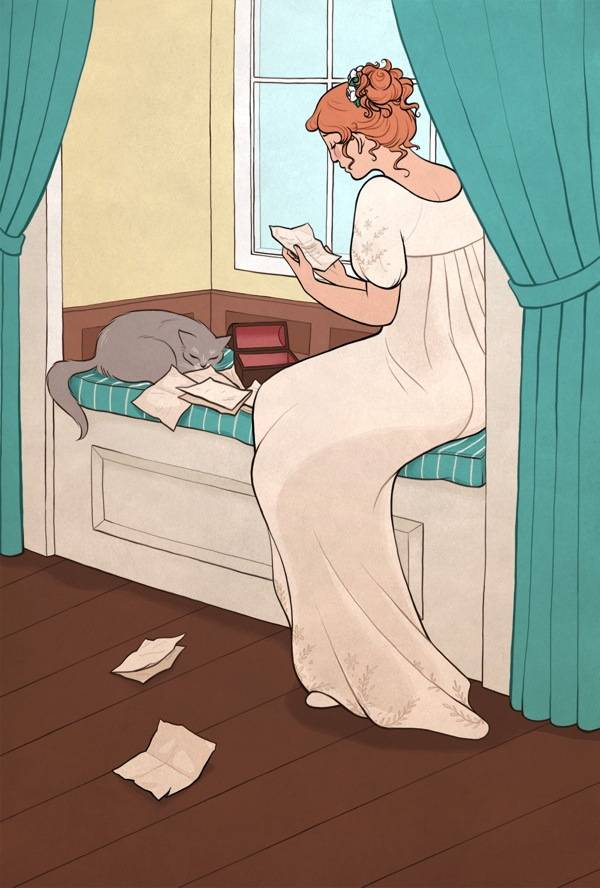 I’ve known about Fresh Romance for quite awhile. I have a story coming up in it in a few months’ time. How that came about is interesting and I’ll get into shortly, but first a quick look at Fresh Romance #1!

It’s the first publication from Janelle Asselin’s new venture Rosy Press. I’ve been looking forward to it because there are so few comics that focus on romance. Since Fresh Romance was announced Marvel has hopped onto the romance train with its own forthcoming series Secret Love. Is Fresh Romance any good though? In this first issue we get three stories: School Spirit, Ruined, and The Ruby Equation.

School Spirit didn’t grab my interest until two of the protagonists started making out in the car. It really took hold with the floating candles and spooky house at the end. The art is crisp, clean, and the writing on point. School stories are not my thing, so I liked the twists in this one. Words: Leth Art: Jovellanos

Ruined is a different kind of tale, very Jane Austen, with sumptuous artwork that I adored. The story and art combine to envelop you like a warmth bath. It’s as much told in the expressions of the characters as the words and that takes skill. It’s all build up and hooks you right before the “to be continued.” Words: Sarah Vaughn Art: Sarah Winifred Searle

The Ruby Equation is the most Questionable Content in feel of the three stories, taking place in a coffee store with odd protagonists and a sidekick. It’s a story where the lead, Ruby, is using magic to create that moment when people fall in love. Only she’s not into it and her long suffering mentor is warning her that’s not good. I’m not sure if they are aliens or spirits but I don’t think that Ruby filling her quota is going to have the effect she thinks it will. Words: Sarah Kuhn Art: Sally Jane Thompson

Fresh Romance is the product of a successful Kickstarter (though you can buy the issues directly through Comixology and their website) but I’d heard about it well before then. I got involved with Fresh Romance thanks to Janelle directly contacting me on Twitter; she asked me if I had any interest in writing a story for it. I jumped at the chance and pitched her four stories. I don’t ever have any problems with coming up with ideas! One she picked up right away and another went on the spares pile.

We bounced emails, I fleshed out the story for her, and then we talked about artists. She suggested someone experienced, as I had very little experience in writing for a comic. I’d only done one comic pitch before this. Comic book writing is so different from what I usually write, which are articles and short stories. In comics, the writer needs to use far less words but still construct an engaging story. Not easy, so I was glad for an experienced artist who could correct any mistakes I might make.

Out of those suggested I picked Maya Kern as my top choice. The style of her artwork fitted the feel of the story I wanted to do. I was lucky and Maya said yes; you don’t often get your top pick, I think. I worked closely with Maya and finished my script, that’s all awhile back now, but my two-part story won’t come out until the end of this year. Comic book lead times can be long!

Janelle’s idea with Fresh Romance was to not just bring back romance to comics but to include diversity at its core. Janelle’s heart is in the right place and she’s taking some risks here. A romance comic that has a focus on diversity, with some first-time writers and artists! I was terrified that Fresh Romance would suck. I didn’t expect it to but I was worried that it might all the same.

It doesn’t! The first issue has diversity, romance, and making out and that’s what I want from a romance comic. We need a broader range of comics for people to buy and Fresh Romance fills a gap in the market with aplomb. One I’m proud to contribute to and pay money for!