It really broils my brain when people hold up video games as the evil opposition to books, but it’s argument I’ve seen more than once on social media. Games aren’t just about shooting people in the face, they’re a new way of telling stories that offer their own interactive takes on everything from Victorian horror to teenage relationships to Jane Austen.

It can be a little daunting to know where to start if so here are a few suggestions that don’t require a monster gaming console or a supercharged trigger finger. And if these don’t do enough damage to your 2015 reading goals, then check out the results of the 2015 Public Domain Jam, which features 23 games based on public domain literature. 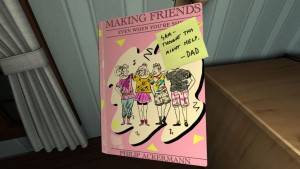 For the YA fan…
Gone Home (PC, Mac)
Like walking around inside a ’90s YA novel, complete with mixtapes featuring Riot Grrrl bands like Heavens To Betsy and Bratmobile. Kaitlin Greenbriar returns to her family home in Portland, Oregon, and on finding it empty is left to explore to find out where her family has gone. Their stories are then told through letters, journals, and everyday  revealing ghost hunts, young love and parental problems. 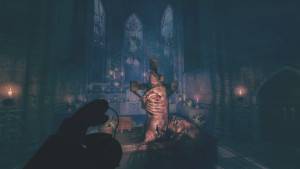 For the horror aficionado…


Amnesia: A Machine For Pigs (PC)
The butchery trade, the industrial revolution, and Aztec mythology turn out to be a terrible combination for Oswald Mandus. He wakes from a fever and follows the voices of his sons Edwin and Enoch through a nightmarish London on New Year’s Eve, 1899. The story unfolds as you explore both through Oswald’s narration and strange calls from the Engineer. Your nerves will have been spiralized before you even see a monster. 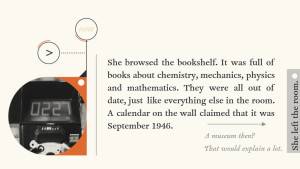 For the textually curious…
DEVICE 6 (iPhone, iPad)
A thriller you can play on your phone or tablet that weaves its story into its text. It’s like swiping through a book that has a mind of its own and you find yourself rotating your iPad and flicking backwards looking for clues you may have missed. Or, in one particularly humbling moment, squeezed into an airplane toilet holding your iPad to the mirror to read some crucial text. 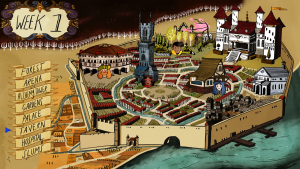 For the art appreciator…
The Yawhg (PC)
The dreamy illustrations of Emily Carroll combine with a choose-your-own-adventure style story that sees four very different characters preparing for the arrival of the mysterious and evil Yawhg. Your choices, practical, magical, reckless will change the lives of the four characters with 50 unique endings for each. Even better it’s a great game to play with friends, as long as you don’t mind someone giving you a Chinese burn for dooming the city. 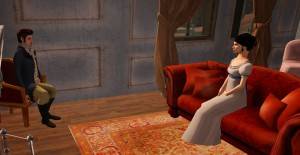 For Lizzie Bennet…
Ever, Jane (PC, Mac)
Word of warning: this game is still in development and not due out until 2016, but who can wait that long to play a game of whist with Wickham? The finished product will include balls, dinner parties, sewing and scandals which the player must navigate to climb the social ranks. Basically this is Austenland in your computer, where “it is not about kill or be killed, but invite and be invited.”