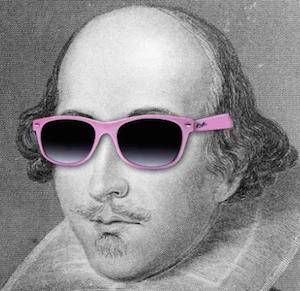 If you ask me, the William Shakespeare character that stands out the most is Shylock, the Jewish moneylender in The Merchant of Venice. The character of Shylock is controversial in many ways and has been debated frequently over the years. Is Shylock an anti-Semitic portrayal of a Jew? If so, does that mean that we have to stop reading and producing the play? 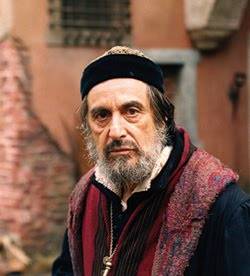 Al Pacino as Shylock in The Merchant of Venice (2004).

In my view, Shylock is a thoroughly problematic character. But my interest in Shylock is not so much whether or not the portrayal of him is anti-Semitic. To me that is a moot point. Hatred and prejudice against Jews was prevalent during Shakespeare’s lifetime, and Shakespeare himself was by no means unaffected by this. What interests me about Shylock is the fact that the character exists at all.

Because when William Shakespeare was alive there was no permanent Jewish population living in England.

Before the year 1290, England had a permanent Jewish population of several thousand people. But in that year, King Edward I, in need of cash and popular support, issued what is known as the Edict of Expulsion, a royal decree that demanded the confiscation of all Jewish property and the expulsion of all Jews living in England. Not until 1656, after Oliver Cromwell had reached out to the Jewish community of Amsterdam, were Jews allowed to settle in England.

When Shakespeare wrote The Merchant of Venice and created the character of Shylock, there was no living memory of Jews as part of English society. Still, Shakespeare managed to pen a simultaneously empathetic and stereotypical portrait of a Jew.

To try and figure out where Shakespeare might have found the inspiration for Shylock, we need to take a look at what we know about Shakespeare himself.

William Shakespeare (1564–1616) was born in Stratford-upon-Avon in England. His father, John Shakespeare, was a merchant, and his mother, Mary, came from a family of the lower landed gentry. Shakespeare’s education consisted of learning Latin and reading Classical history and literature. At the age of 18, he married Anne Hathaway and had three children. In 1592, Shakespeare is mentioned as a writer in London. In 1594, he became a member of the theater company that later would be known as the King’s Men. There is no substantial evidence that he traveled outside England.

Several theories have been brought forward when it comes to Shakespeare and the Jews. One theory is that Shakespeare’s plays were in fact written by Amelia Bassano Lanier, a woman of Venetian-Jewish origin connected to the court of Elizabeth I. Another theory claims that Shakespeare befriended a Jew who lived in London’s Domus Conversorum, a house for Jews who had converted to Christianity founded in 1232 and which stayed open after the Expulsion. A third theory puts forward that Shakespeare witnessed the public execution of Roderigo Lopez, Queen Elizabeth’s Jewish personal physician.

Shakespeare is believed to have done his character studies on the streets of London, incorporating ordinary people’s idiosyncrasies and manners of speech in his plays. I believe that this is where he found the inspiration for Shylock.

Even though England no longer had a permanent Jewish population, there were still Jews arriving at London’s port, either as merchants or refugees from Spain. Shakespeare would most likely have met several of them. At the same time, Jews as the antithesis of Christians was a fixture in contemporary propaganda, which stated that the only way for the Jewish people to redeem themselves was to convert to Christianity.

All of these influences came together in The Merchant of Venice, which despite its problematic portrayal of Shylock still resonates today when anti-Jewish sentiments are on the rise. Just read Shylock’s rebuttal of the accusations made against him. Once again, William Shakespeare’s intuitive perception of the human condition is brought to the fore.