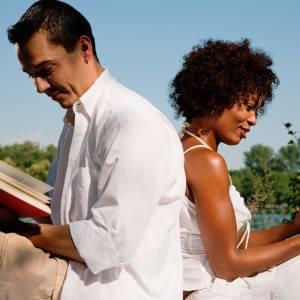 Almost a month ago, I moved to New York City. I told my family and friends that I was moving for adventure, social mobility, and connections. However, I purposely neglected to mention that I was also moving to improve my love life. It had been about six months since I had last been on a date and I was worried that I was becoming a workaholic. About two or three days after my move, I decided to get back onto Tinder, and that’s when I met Kelvin.* He was over six feet tall, college-educated, and arguably one of the finest guys that I’ve ever dated.

About an hour or two after having our first conversation on Tinder, Kelvin asked if I wanted to go out to dinner that same day and it was a Sunday so I didn’t have much else planned. We met on the Upper West Side and had a great date at a Thai food restaurant. Second date: we met up at a beer garden and it was even more satisfying than the first. We talked about our interests, college experiences, and pop culture, and sat on a bench near Morningside Park until around 1, 2 in the morning. Needless to say, I was starting to have feelings for Kelvin. We texted all throughout the day and night until I fell asleep–which I always did before him. Since he was starting to feel like a constant and we had much to talk about, I thought to myself, “Hmm, maybe he’ll stick around for a little”…until he told me that he didn’t read.

I could’ve choked on my own spit when he unabashedly admitted that to me–a writer. Kelvin didn’t read books or articles and I was bewildered at how a college educated man in his mid-to-late twenties could say that. After I was informed of that tidbit, my feelings for Kelvin diminished. I wrestled with myself, wondering if I was being too snobbish for not liking a man as much as I initially thought “simply” because he didn’t read. Should I expect every man I go out with to tell me how much he appreciates James Baldwin’s ferocity, William Faulkner’s imagery, Ta-Nehisi Coates’ research, or James Joyce’s stream-of-consciousness? I’ve always had these ideas of what I wanted in an ideal partner but I never had “must-be-a-book-lover” as a requirement. I suppose, deep down, I thought that it was just a given. I’ve never met a contemporary who didn’t like to read.

Because I wasn’t Kelvin’s girlfriend and he had no obligation to me (as I didn’t to him), I tried to make my concern known more implicitly. Kelvin was a big science fiction fan and almost had a fit that I’d never watched the Back to the Future trilogy. I agreed to watch it with him only if he would accompany me to a bookstore. He flat-out refused. I jokingly asked why and he said, “Because books.” I tried to suggest authors that he might like, such as Octavia Butler and Isaac Asimov, and he half-heartedly agreed to come with me to the bookstore if there were SparkNotes books for the works that I mentioned. I felt so defeated. But I took that compromise as better than nothing and tried to make plans for us to show each other what we liked to do.

Then it happened: the text.

“To be honest, I don’t think we should continue this. I’m not really looking for anything serious and I know that you are. You’re an amazing person and woman…” blah-blah-blah-blah-blah.

The wind was knocked out of me, yes. However, the next day, I was over it. I realized that Kelvin did me a huge favor by cutting things off because we would have never worked out. I cannot date someone who doesn’t like to read and has no interest in changing this repudiation of such a valuable activity.

I cannot imagine dating someone who doesn’t understand the beauty in writing and the connection one feels when reading from artists who might share the sentiments that he or she had yet to fully elucidate. I’m a writer, for God’s sake. I want to be able to read poetry aloud to my partner while he rests on my lap, walk down the aisles of bookstores hand-in-hand, and go to readings while we sip coffee and tea and eat pastries. This would mean so much to me and I shouldn’t have to push that into the farthest corner of my life just so that I can let someone else in.

So no, I cannot date a stubborn and proud non-reader–and neither should you, if you proudly call yourself a bibliophile. This short and transient dating experience taught me that I should never settle, especially on things that I highly esteem. Because to take books out of the equation of who I am as a person would be a serious miscalculation, one from which neither he nor I will benefit.