These are in no particular order according to creepiness. However, if you’re like me and are terrified by your own shadow, these are all equally disturbing and gross. 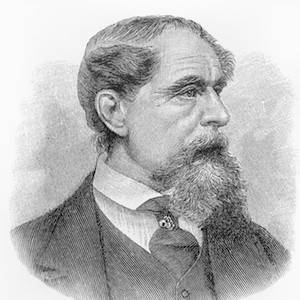 1. As part of his recollections in The Uncommercial Traveller, Charles Dickens would often visit the Paris Morgue. The morgue was also visited by Robert Browning as part of his inspiration for his monologue, “Apparent Failure.”

2. While books bound with human skin can be found in collections in several libraries, the Boston Athanaeum holds one of the few books bound with the skin of its author. While imprisoned, a highwayman wrote of his life, but could not afford to have it bound. Upon his death, he requested his skin be used and the memoir gifted to the man who had originally caught him.

4. Virginia Poe, late wife of Edgar Allen Poe, startled the family one night while singing and playing the piano. During that time, her lungs began to hemorrhage from her Tuberculosis and she started bleeding from the mouth.

5. The Willard Library in Evansville, Indiana, is known to be one of the most haunted libraries in America. A former Victorian home, the library is said to house a few ghosts, with the most famous being that of the Grey Lady. Sightings of the Grey Lady date back to the 1930s, and the library currently has “ghost cams” installed in case anyone hopes to catch her on camera.

6. J.M. Barrie, author of Peter Pan, is rumored to have been quite the odd character. However, after his brother died in a skating accident, Barrie would routinely dress up in his dead brother’s clothing in order to ease his mother’s grief. The tragedy of his brother’s death would come to inspire the character of Peter Pan.

7. “Burking,” or the act of murdering an individual for the purpose of selling their body to science for money, is a frequent theme in Charles Dickens’ The Pickwick Papers. However, this burking theme plus Dickens’ fondness for young, orphaned characters was partially inspired by the very real death of a young Italian boy.

8. Edwin Booth, brother of John Wilkes Booth, was so renowned for his acting skills that his fans frequently showered him with gifts. His portrayal of Hamlet was so beloved that, following his death, one adoring fan left his body to Booth, so that his skull could be used during Hamlet’s famous soliloquy.

9. Discovered in the earlier 20th century, the Voynich manuscript is known to be the most mysterious text in the world. Though the manuscript dates back six hundred years, no one has been able to fully decipher the text and images inside.

10. Mark Twain was born in 1835, coinciding with the last time Halley’s Comet would be seen in the 19th century. He’s quoted saying: “I came in with Halley’s Comet in 1835. It is coming again next year, and I expect to go out with it.” The next time the comet came closest to Earth was on April 20, 1910. Twain died of a heart attack the next day.

11. Friend to Oscar Wilde, writer, and scholar, Edward Heron-Allen became one of many cursed by the famous Delhi Sapphire. The stone was said to cause the owner bouts of bad luck and misfortune. Every time Heron-Allen tried to get rid of the stone, it always seemed to return to his possession. Upon Heron-Allen’s death, the stone was donated to a museum. His grandson said of the stone, “My mother certainly wouldn’t touch it and she recommended that we didn’t either because of the curse.”

12. Though it may seem like an odd ritual now, visiting the corpse of a loved (complete with hugging) was a common practice in the 19th century. After his wife died at a young age, Ralph Waldo Emerson made it a routine to have her coffin opened every morning so he could embrace her corpse. This carried on for a year.

13. Husband of Frankenstein author, Mary Shelley, Percy Blysshe Shelley died from drowning in 1822. During the cremation of his body, it was said that his heart refused to burn, and Shelley plucked it from the pyre. She carried his ashes and heart around with her until the death of her son, where she then place her husband’s heart in the family tomb.