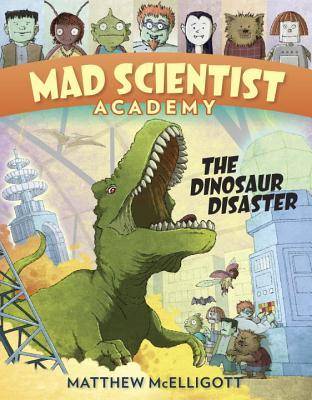 To be fair, dinosaurs are kind of low-hanging fruit in the children’s non-fiction market. It’s not hard to sell dinosaur books to kids, and when you add monsters, robots, mayhem, and destruction into the mix, most young readers probably won’t even notice they’re learning, particularly not when the facts are presented in comic book format. That said, what Mad Scientist Academy: The Dinosaur Disaster does, it does charmingly, with whimsical illustration and clear language that never talks down to kids. Beginning with the frontispiece, which features an engineering plan for a potentially realistic mechanical triceratops, this book ripples with gentle delight and sweet attention to detail.

It’s the first day of school at the Mad Scientist Academy, and six little monsters—a reanimated corpse, a giant bug, a swamp creature, a robot, a werewolf, and a vampire—find their new teacher tied up in his lab. Dr. Cosmic is a red-haired goblin, unfazed by his predicament. He was only trying to put a leash on Oscar, the school pet, who escaped. Dr. Cosmic suggests that Oscar is a dinosaur, and asks the kids to keep an eye out for him as they begin their lessons with Dr. Tibia, a hologram Cyclops paleontologist.

I’m telling you, this book has everything.

Dr. Cosmic, being a mad scientist, has filled the school with an exhibit of life-sized robot dinosaurs. Purely for academic purposes. Honest. And, being a mad scientist, he has enabled the dinosaurs to function in two modes: “safe,” in which they behave like tame and docile toys, and “live,” in which they act as they would in the wild. In a twist that will come as no surprise to anyone who’s ever read a Michael Crichton novel, the dinosaurs are accidentally switched to “live” while the kids are completing their first assignment inside the exhibit.

Not only do the kids have to work together to problem-solve a path out of danger, they also need to research and learn about dinosaurs to make informed choices along the way. The facts they learn from their Mad Scientist handbooks, which are like Kindles designed by Rube Goldberg, reflect up-to-date and accurate science.

There’s something really delightful about the drawings. The obvious joy exuding from the panels of T-Rex stomping through walls indicates that this creature probably shares the same DNA as the ones in Bill Watterson’s Sunday Calvin and Hobbes. It’s magic encapsulated: there’s so much realism injected into the fantasy that you want to believe the engineering schematics could really work. The monster kids are adorable, and the soft, warm coloring also reflects the Sunday comic aesthetic.

Category ID: 477
Category ID: 1074
Category ID: 14869
The Stack Newsletter
Sign up to The Stack to receive Book Riot Comic's best posts, picked for you.
Thank you for signing up! Keep an eye on your inbox.
By signing up you agree to our terms of use

There’s also a companion website, which offers an overview of the story and process images demonstrating how the book was created, along with lesson plans, activities, and other links of interest to kids and educators. The two-part nature of the title suggests that this may be a continuing series. I can imagine an insect book, a natural disaster book, an astronomy book. Sharks, snakes, robotics, maybe even basic chemistry or physics…there are a lot of places science could take the Mad Scientists.

Mad Scientist Academy: The Dinosaur Disaster is a perfect resource for precocious kids, or older, reluctant readers. It’s the kind of book that even children who don’t love books enjoy receiving. It’s probably also the sort of thing that adults would quickly tire of if forced to engage in repeated oral interpretations, but one of the great things about putting stories for kids in graphic form is that they don’t need adults to read them aloud over and over again. The pictures tell the story, and even the salient non-fiction details gleaned from the computer handbooks are easily discerned.