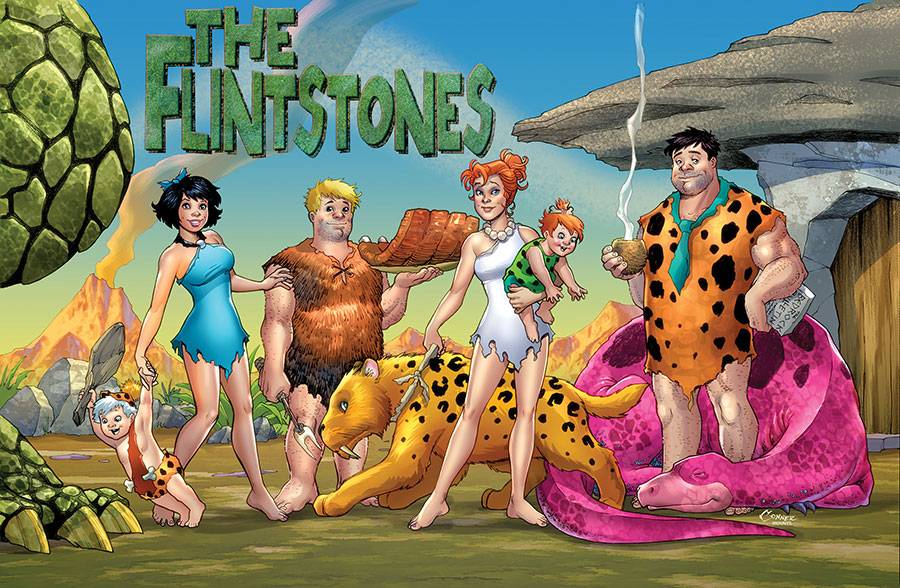 Last Thursday, DC announced a new lineup of titles based on Hanna-Barbera properties, first via Entertainment Weekly and then on their own blog. The books, which drop in May, include Scooby Apocalypse, Future Quest (a Jonny Quest team-up book), Wacky Raceland, and The Flintstones, and are being pitched by the company as “reimagining of these Saturday morning classics with a more modern and contemporary look and feel.”

Now, I love updates to old IPs. (If I didn’t, I probably wouldn’t be a Superman fan!) I’ve heartily enjoyed Archie Comics’ recent revitalization of its line, and I’ll buy basically anything a publisher can slap a Disney Afternoon logo onto. But I’m confused by this particular venture. Here’s a few things I’m wondering:

I don’t mean that question to be read as, like, “Gawd, who would even want this?” Because there’s a Jeff Parker/Doc Shaner book in there so the answer is me, I want this, give me that book post-haste. But with announcements from comics companies, especially announcements framed as exciting new takes on famous properties, I always want to know what market the publisher is aiming for.

In their blog post, DC says the line is aimed at the “teen-plus set”; the EW article refers to it as “young adult comic fare.” It’s not clear whether EW means “young adult” in the publishing sense, which is teens, or whether they’re referring to actual adults who are young, but I’m interpreting all this as a target audience of teens and twentysomethings.

Which…huh. I’m 31, and I remember watching the shows these books are based on when I was a kid, but I was at the tail end of that audience. After-school cartoons and Nickelodeon as a whole exploded in the late 80s and early 90s, and Cartoon Network, which mostly aired reruns of Looney Tunes and, yes, Hanna-Barbera shows at first, starting experimenting with original programming. As more and more cartoons for kids were produced, networks had fewer and fewer reasons to rerun increasingly dated (and infamously cheap) old material.

Category ID: 1074
Category ID: 4284
Category ID: 471
The Stack Newsletter
Sign up to The Stack to receive Book Riot Comic's best posts, picked for you.
Thank you for signing up! Keep an eye on your inbox.
By signing up you agree to our Terms of Service

I took an admittedly extremely unscientific poll of my Twitter followers to see if I was wildly off base on this, but sure enough, the younger the viewer, the less likely they were to have grown up on these franchises (aside from Scooby Doo, who has been shaking and shivering on TV pretty much constantly in some form or another for nearly 50 years now). People in their late 30s and up definitely watched these shows, people in their late 20s and up might have, and people in their mid-20s and below…not so much. So who, exactly, in the college age set is jonesing for an update of The Flintstones?

2. In what way is this a reimagining?

There have been a lot of updates and reimaginings of older properties in comics recently, and some of those – like the new Archie titles, from both the classic and horror lines, and JEM and the Holograms – are Panels favorites. This is hardly a No Updates Allowed space. But with those titles, it’s clear what’s being done to bring them into the 21st century: diverse creative teams and casts, up and coming artists with unique styles, new takes on old concepts. Shaking things up in a way that still shows love for the original versions can bring in the nostalgia readers – and a whole new audience.

“It was so fun to go out and look at [these characters], but not just bring back versions that existed 40, 50 years ago and really look at it the way of saying, if these characters were created and interpreted today, how would they exist?” says co-publisher Dan DiDio…but when I look at the covers of the new Hanna-Barbera comics, I see very few women and one highly stereotypical person of color – Jonny Quest’s sidekick Hadji. Amanda Conner’s art is always wonderful, but her character designs for the Flintstones, which DiDio says “moves them forward,” look like…Amanda Conner drawing the Flintstones. There’s no added diversity of body type or skin color or ability so far, and of course there’s no way to know if there are any LGBTQ characters from a single image.

True, Hanna-Barbera may have limited what DC was able to do in terms of diversifying the characters demographically and artistically, but I’m simply not sold on most of this as a fresh take. It doesn’t help that so many of the names attached to these projects are the usual suspects as far as DC is concerned; I am not convinced that someone whose work was paradigm-shifting in the 80s or 90s is going to shake up Scooby Doo for millennials.

Wacky Raceland brings in Mark Sexton of Mad Max: Fury Road for vehicle design. That’s a great gag, and could well lead to a hilariously dark comic…but it sort of misses the point of what made Mad Max: Fury Road such a hit and so incredibly compelling to viewers. Fury Road is a – pun intended – furiously feminist story that aims straight at the patriarchy’s jugular and rips it out. Wacky Raceland has no women creators named in that announcement, and only one female character: the dauntless Penelope Pitstop.

In fact, aside from Amanda Conner’s character designs for The Flintstones, there are no women credited in this lineup (though I’m pretty sure I spot Jordie Bellaire’s always-stunning colors on Future Quest, not that DC bothered to credit 2014’s Best Colorist Eisner winner). [Editor’s note: Doc Shaner reached out to us to let us know that he colored the concept pieces before Jordie was attached as a colorist, which is why she isn’t credited.] Again, I have to wonder how much of a reimagining this is if we are once again, as always, ad infinitum, talking about all-straight, mostly-male, mostly-white updates to 50-year-old properties. That…kind of sounds like DC as usual to me, really. (Looking at you, Hal Jordan.)

Again: I am going to snatch Future Quest off the shelves like a ravening beast, because the Parker/Shaner/Bellaire team is always gold. I’m curious about Wacky Raceland, and intrigued by the choice of Prez writer Mark Russell for The Flintstones – if there’s one thing that guy can do, it’s create a bizarre, satirical world. And Shaggy’s Portlandia-esque beard and tats are straight-up hilarious.

But for all DC’s talk of revitalization and bringing in new audiences, I’m not convinced that this line hasn’t been created for exactly the people spearheading it: mostly-white, mostly-straight dudes in their 40s and up who are pretty sure that pop culture hit its greatest heights when they were ten. I really, really want to be proven wrong here, and DC’s surprised me in the past. But so far? This is the same-old, same-old. A page right out of history, indeed.

(Sorry I got the Flintstones theme stuck in your head.)