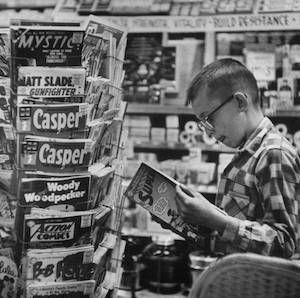 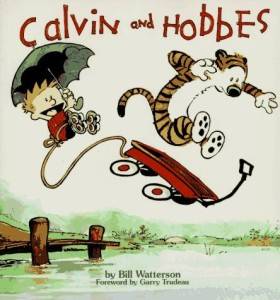 I let my son read whatever he wants, and all he wants to read is comics.

My son didn’t talk much as a little guy, but it wasn’t until he was four that he developed a speech impediment and started speech therapy. He worked very hard for several years with his wonderful therapist. He learned to talk, one sound at a time. I cried the week I found out that they’d been secretly working on M so he could call me Mama again. (His particular case of verbal apraxia had him losing sounds that he’d previously had no trouble with, so I had the unusual experience of having my kid STOP calling me Mama, which…I did not love.)

Sam is nearly ten now and talks just fine, though his vocabulary runs a bit toward the Calvin and Hobbesian.

My husband and I were both what is considered late readers, both of us learning around 7.5-8 years old. For my husband, in traditional school, this led to some issues; for me, in a relaxed homeschooling environment, there were no problems. I was reading at college level within a year, and he is fastest reader I’ve ever encountered, with a stunning recall of everything he reads.

Sam was about the same age. It was no big deal to either of us that he learn on any schedule; we homeschool, so he has no pressure to read at the same level as his contemporaries. We’ve always read to him, and encouraged him to look at picture books and comics without us, too. Even if we hadn’t been philosophically convinced this was the right path, his speech needs took precedence over any other developmental worries.

Sam was an enthusiastic “pre-reader” (I don’t know if that’s a thing, but it’s totally a thing) for years. He recognized many words by sight and “read” stories in pictures. He stalled at that stage for a long time, but it didn’t feel like a big deal, and indeed it wasn’t.

One day, with very little fanfare, he was able to read words he didn’t already know. As soon as he could read, his speech started to improve faster, probably because he could see the sounds his mouth needed to make.

That was about two years ago. He started reading with comics and he still reads comics. He has zero interest in anything else. It is easy to feel like I have failed him somehow, but I battle hard against that feeling because it’s just not true. He loves to read. He happens to need visuals along with text.

The fact is, I’d be fine with Sam reading whatever he likes no matter what his history was. But parenting can feel like such a minefield–if I make X decision, will my kid be ruined forever? Well, no, probably not. But it sure does feel that way sometimes! So this is for me as much as it is for any other parent who is struggling with their child’s chosen reading material:

Maybe someday he will enjoy words without pictures. Maybe he never will. Why should that be a problem? One of his favorite recent reads is a graphic adaptation of A Wrinkle In Time; we just bought him the first Wizard of Oz graphic novel, because I’ve been reading the L. Frank Baum books to his sister and hope he will start enjoying them, too. And when there are books that he needs or wants to read that haven’t been adapted as comics? Maybe he will turn to audiobooks; maybe he will draw comics himself; heck, he might even start reading text without pictures. He’ll figure it out when the time comes.