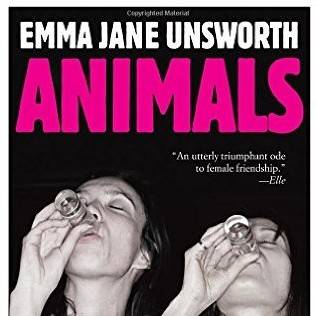 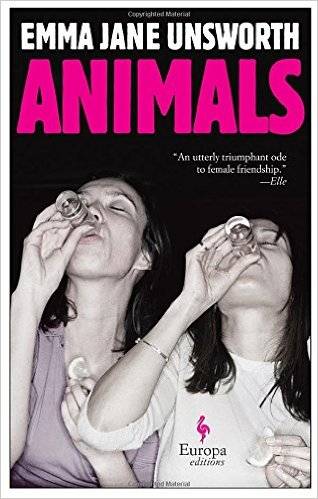 Not all romance has to involve a man and a woman coming together under some meet cute lifted from When Harry Met Sally. In Emma Jane Unsworth’s Animals, fading party girls and best friends, Laura and Tyler, are inseparable. Residents of Manchester, England, their ten-year friendship has been shaped by countless wild nights followed by merciless hangovers and outlasted relationships with fleeting boys and men. Laura and Tyler are the girls who stayed at Andy Warhol’s factory for too long, floating between unendurable sobriety and dizzy delirium. Tyler understands and knows Laura in a way that Laura’s serious-minded fiancé and classical pianist, Jim, does not. Laura realizes that she needs to leave her partying days behind. Unfortunately, her ambivalence about her upcoming wedding and her reluctance to cut herself off from Tyler proves nearly impossible.

As much as their friendship has nestled into toxic dependency, Laura cannot unlove Tyler, this passionate woman raging against time itself, raging against the uncertainty of a future without the assistance of drugs and alcohol to numb emotional trauma. Caught in the middle, Laura is not only afraid of growing up and leaving behind a prolonged adolesence, but she’s terrified of being alone. During a drunken conversation with Jim, he tells Laura, “We are not defined by how we are but by how we try to be.” Laura replies, “What if you try too hard to be everything?” It certainly foreshadows the course of Jim and Laura’s partnership, which is shaped by Jim’s determination to be taken seriously as a professional pianist and Laura’s anxiousness born out of a subconscious fear of missing out. Like many adults newly released from the possibilities of being in your twenties, Laura is skittish about the conventions of mainstream society. Getting married and having kids almost seems like a death sentence.

In the film world, romantic comedies fail to capture the volatility, the meanness and intensity of female friendships forged during the pivotal years of girlhood. Laura and Tyler may appear to be total opposites, but they’re actually different sides of the same coin. Tyler may be the self-appointed extrovert and the loose cannon. She routinely indulges in the role of the “alpha friend,” the one who makes commands while the other friend obediently follows. However, Laura is by no means a wilting violet. Tyler may serve as a convenient person to blame for her addictive tendencies, but Laura easily manages to get into trouble by herself.

For some, the novel could become monotonous and repetitious as the narrative unfolds. It’s not a book of divine interventions and sudden epiphanies. Tyler and Laura don’t have a huge, screaming match in the middle of the street. The breakdown of their friendship began before the first chapter. The dissolution of their relationship seems actually much more true to life than a final scene of mortal insults. Sometimes, friendships fade without fireworks. Some friendships were never meant to last forever. Some friendships only serve a momentary purpose and then the other person eases out of your life until they are nothing but a beloved anecdote in a dinner party story. Laura and Tyler have loved each other too intimately, too deeply to be able to abruptly vanish from one another’s lives.

The ties that bind childhood friendships can break and tear under the weight of pending adulthood. Animals does not explore unprecedented grounds in literary fiction, but it takes a generally universal conflict and fleshes it out and fills it in. Reviewing for the New York Times, Sarah Lyall observes, “Perhaps what Laura needs is not to give up alcohol, but to give up Tyler. Or Jim. Or her writer’s block. If there’s a lesson here, maybe it’s that the person she needs to rely on most is herself.” If this were a different novel set in a different culture, perhaps the ending would involve Laura making a clean break and entering rehab. But in the end, Unsworth seems to say that the drugs and the drinking are merely symptoms of a larger problem, an existential crisis that can only be solved by retreating inward.

Unusual Suspects Newsletter
Sign up to Unusual Suspects to receive news and recommendations for mystery/thriller readers.
Thank you for signing up! Keep an eye on your inbox.
By signing up you agree to our Terms of Service
Enter to win a $50 gift card to Barnes and Noble!