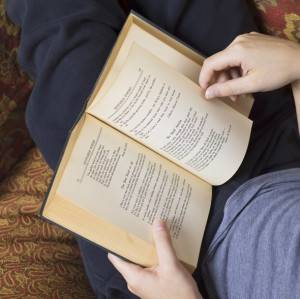 Poetry has lots of uses. To avoid writing a term paper, I’m only here to write about the ways it’s been useful for me. When I was very young, two or there, I made up poems about my bath toys. This was my way of observing and understanding concepts like “blue,” “bigger,” and “more.” I recited nursery rhymes to anyone who would listen; that made me appreciate the rhythms of language.

When I got older, high-school age, I found Sylvia Plath and ee cummings and my life changed. The music I loved . . . its lyrics were poetry. I tried to convince my English teacher of same, as utterly as I’d convinced myself, but he wasn’t buying it. (He just said the music I listened to sounded evil.) Plath and Amos, Cummings, DiFranco, Sexton, and Millay convinced me to write poetry, too. I cleared out the psychic and emotional cobwebs by putting words on paper in patterns that made sense to me. I tried my hand at sonnets and villanelles, but I never got very good at writing within systems of rules. I still try to do this from time to time, but I haven’t written a poem since my last go-round with unrequited love.

Now, on to the improper ways I have used poetry. You know how some people are religious, and they’re truly spiritual people whom you can’t help but admire? That’s how I like to think I am where poetry is concerned. But then there are those who profess to be religious and truly spiritual, but it’s just a show? I fear that’s how I’ve come across more than once, and so I’d like to use this space to atone for those sins.

I have used poetry improperly to:

Impress a boy in Sunday school with all the printouts falling out of my Bible.
There was a Shakespeare sonnet or three. There was Adrienne Rich, a segment from “Diving into the Wreck.” I know Millay’s “[Well, I have lost you]” slid out more than once. My reasons were far from holy. In fact, I had gone to high school with this boy, who was two years older and had already graduated. My family was between churches at the time, so we were visiting the church where his grandfather was pastor. I had given him a note telling him I liked him mere weeks earlier and been shot down, so I think I chose the poems I did because I wanted him to see me as deep, sure, but also because each of them represented different ways I had felt about his rejecting me. I was amazing; seeing snippets of poetry, printed out in Papyrus font and indigo ink, would clearly prove that to him.

It did, and we’ve been married for fifteen years! Just kidding. I doubt he’d recognize me if we passed each other in Target.

Passive-aggressively confront somebody for hurting me by describing my feelings in gory detail, posting the poem on my LJ, and emailing said person the link with no comment. MAKE THEM WORK FOR YOUR RAGE. MAKE THEM WONDER.


My first experience with love was with unrequited love. I don’t think I’m alone in that. He was the wrong person in about twenty different ways, but I didn’t care. He cared, but only sometimes. Nearly every word I wrote (and there were a lot) in 2000-2001, the years I wrote the most and cared the least what other people thought about me, was about him, and he knew it when I deemed him lucky enough to read my words. But then there was the time when I’d written something and I was just too fucking angry to face him with it, so I used the above method instead. The poem was called “All Manly.” It was a seething portrait of a long-distance relationship, in which the distance was a lack of emotional closeness rather than physical proximity. He emailed me back, asking me to take it down. To him, it was so nakedly about us that he wanted no one else’s eyes on it. Understandable. But it’s probably still buried somewhere in the LJ archives of yore. (Somebody tell me if there’s an easy way to dig through those.)

Show off my taste in music/the poetry of other people by stealing lines and sticking them in my own poetry.
This was my actual jam for a minute. I had seen and taken literally the bit of T. S. Eliot advice about how good writers borrow but great ones steal. I stole so much I must’ve been really freaking great. Mostly from music I knew my teacher thought was evil. Usually girl-empowerment songs like “Superhero” by Ani DiFranco and “Leather” by Tori Amos. But once, when I was in my eleventh-grade American lit survey, I decided to borrow from Robert Frost.

The poem was part of an assignment for the Gifted & Talented program my mom wouldn’t let me drop out of. My English teacher, knowing my feelings about doing extra homework for zero credit, let me do what I wanted, so I wrote dozens of poems. Each group became a “collection” when it was time to hand them in, and I always wrote an introduction discussing themes and inspirations. My titles were always lines from songs. My Frost ripoff was part of a group I’d collected under the phrase “Live Through This,” which of course was after the Hole album of that title. In my intro, I cite the “blunt yet rambling style of Courtney love” as my biggest influence. (Same, teen Jeanette, same.)

I mean, just imagine the notion that “good fences make good neighbors” in the hands of a seventeen-year-old girl with a crush. The poem is on its way into a larger, creative project I’m working on or I would include it here. And you know, I would still be flattered by “Robert Frost meets Courtney Love” in a blurb, if I’m being perfectly honest.

How ’bout you guys? Ever used poetry for all the wrong(ish) reasons?