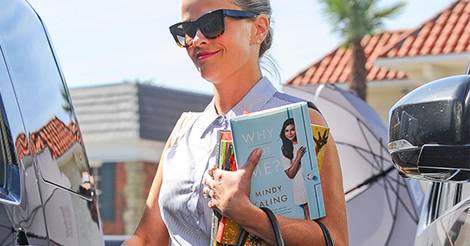 I think it’s been established that Reese Witherspoon loves to read.

And as Rioter Nikki Steele pointed out in 12 Reasons We Love Bookish RW we love her for it. (Yes, I’ve said love a lot in two sentences but I’m talking about RW and books so it can’t be helped.)

Since it can be time consuming to find all of Reese Witherspoon’s book recommendations amongst all her other Instagram/Twitter posts–and her book club hashtag #RWbookclub gets used a lot by enthusiastic followers–I decided to round-up her book recs from the last 9 months. So anytime you feel like reading like Reese (that should be a t-shirt) you can just glance at the list and select your next read.

This book kept me on the edge of my seat. #thriller #BookClub #SummerReading #SecondLife @SJ_Watson pic.twitter.com/5vwxXEiVFd

Second Life by S.J. Watson (Reese’s production company is adapting it into a film–more info at end of post)

My weekend is going to involve these two items…and hopefully a hammock. You? #BigLittleLies #BookWorm pic.twitter.com/AsdxKXDmWX

Both #MondayMuse AND #BookClub! I ❤️ this new book by my friend @CindyCrawford. #BeautyBrainsBusiness ?? pic.twitter.com/Yd4cZT1NCS

In a Dark, Dark Wood by Ruth Ware (Reese’s production company is adapting it into a film–more info at end of post)

#RWbookclub: #TheThingAboutJellyfish about a girl who has lost her best friend – is stunning and magical! #Mustread pic.twitter.com/E4CF4n2nUf

The Thing About Jellyfish by Ali Benjamin

Why Not Me? by Mindy Kaling

.@cherylstrayed wrote this book of no nonsense, loving wisdom! It's a goodie! #RWBookClub #GiftAlert ? pic.twitter.com/wqhfabBmWd

Year of Yes by Shonda Rhimes

My Life on the Road by Gloria Steinem

In honor of #Valentines❤️…I’ve been reading some of the most iconic love letters… https://t.co/jg4KFxDyHP pic.twitter.com/IV77tssxSB

She doesn’t list the source, although I assume it’s from Kahlo’s love letters that were auctioned, but it reminded me to read Frida Kahlo’s biography by Hayden Herrera.

Curling up with #PrettyHappy ? #KateHudson is one of the happiest people I know, so this should be good? #RWBookClub pic.twitter.com/8AdEJ9unds

Has anyone read this beautiful book? I'm halfway through and I can't put it down… #TheNightingale #RWBookClub pic.twitter.com/nTMjLk9NVc

The Nightingale by Kristin Hannah

And is there a greater Reese Witherspoon book recommendation than her choosing to adapt it into a film or TV show? If you answered ‘no’ and you’re an always-read-the-original-source kinda reader here is a list of movies/TV shows Reese, and partner Bruna Papandrea’s independent production company Pacific Standard, has/is creating with a link to the book.

Wild (2014) starring Reese Witherspoon adapted from the same titled memoir by Cheryl Strayed which follows her self discovery journey which occurred as she hiked 1,100 miles.

Gone Girl (2014) starring Rosamund Pike and Ben Affleck adapted from the same titled book by Gillian Flynn that at this point everyone must have heard of.

Ashley’s War (in-development) based on the same titled book about a secret pilot program that placed women alongside Special Operations soldiers by Gayle Tzemach Lemmon.

Opening Belle (in-development) which Reese Witherspoon is said to be set to star in as an overworked mother trying to make it on Wall Street based on the same titled novel by Maureen Sherry.

Luckiest Girl Alive (in-development) based on the same titled novel by Jessica Knoll which has been in the news recently for her discussing the real rape that informed her novel.

The Outliers by Kimberly McCreight, a Sci-Fi YA set to release in May 2016, was acquired in 2014 by Lionsgate and will collaborate with Standard Pacific.

The Engagements by J. Courtney Sullivan, a novel about the different women who own one ring, was said in 2013 to have Witherspoon starring and possibly producing.

In a Dark, Dark Wood by Ruth Ware, a 2015 mystery/thriller, has been acquired by New Line Cinema to collaborate with Pacific Standard.

It appears Reese Witherspoon has a talent for spotting great novels before they’re even published. Maybe she should get an imprint too.