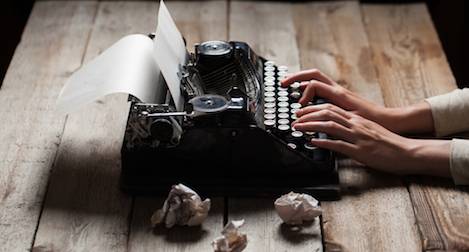 This is a guest post from Shara Lee. Shara is a former editor turned higher ed marketer. She has tendencies toward internet procrastination, Netflix, and stories featuring strong female leads. Follow her on twitter @shara_lee.

Ever wonder what your most beloved authors read? I know when I stumble across an author admire, I want to read what they’ve read and loved too. So to the best of my ability, and after some internet scouring, here are the reading lists of four of my most beloved authors.

I start with Joan Didion because Slouching Towards Bethlehem is one of my foundational texts. I hope that by osmosis reading her favourite books will make me write a little more like her (well, a girl can dream). Recently, the internet released a handwritten note by Joan herself that listed 19 of her favourite books. I’m not sure of the original source, but here’s the complete list if you want to check it out. Be warned, if you love Joan as much as I do, your TBR is about to get real long. Here’s a taste of her picks: Victory by Joseph Conrad (A Paris Review article quotes her saying that this may be her, “favourite book in the world”), Speedboat by Renata Adler, A Farewell to Arms by Ernest Hemingway, and Notes of a Native Son by James Baldwin.

The Brief Wondrous Life of Oscar Wao was one of those books I read and went, “wow, you’re allowed to do that?” The writing style of Junot Diaz is punchy, non-traditional, and full of slang. His books will also give you a background on the Dominican Republic with what is farthest thing away from a history lesson as you can imagine. For his picks I refer to a New York Times By the Book Interview where he was asked what three books he would take if stranded on a desert island. His answer was Samuel R. Delany’s Dhalgren, Toni Morrison’s Beloved, and Cormac McCarthy’s Blood Meridian. He cheats a little and lists a few more. Check out the list here.

I’ve been fascinated with Hemingway ever since I visited Havana and went to his favourite bars and the hotel he stayed during his time in Cuba. A Moveable Feast became an instant favourite of mine because it lifted the veil on what it was like to be a starving artist in Paris in the 1920s and features some of the biggest literary names of the 20th century, from Gertrude Stein to F. Scott Fitzgerald. Similar to Joan, I found a handwritten list by Hem entitled, “Reading list for the young writer” circa 1934. His list includes: Leo Tolstoy’s Anna Karenina, James Joyce’s Dubliners, and Henry James’s The American. See the full list.

Lahiri’s novel The Namesake was so beautiful. The way she describes smells, foods, and feelings really pulled me into her world. She does an incredible job of describing the experiences and cultural struggles of first generation Americans. If you haven’t read any of her books, please pick one up. Lahiri says that her favourite novelist is Thomas Hardy. “I continue to reread him as often as I can. The architecture of his novels is magnificent, and the way his characters move through time and space is remarkably controlled,” she tells the New York Times.

Sorry in advance if I doubled your TBR list.