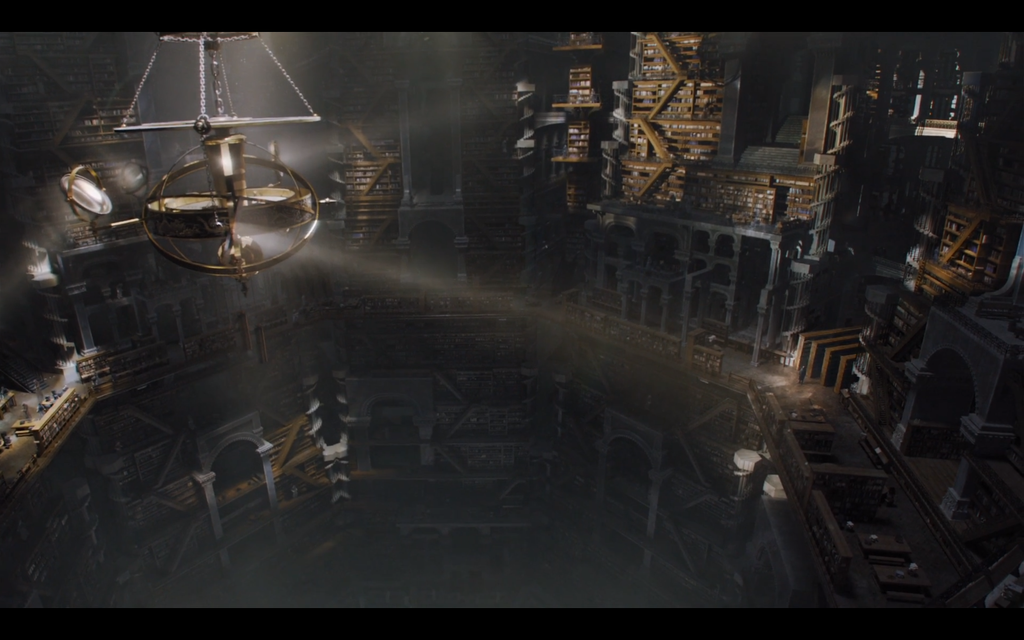 In the season six finale of Game of Thrones, fans of the show and the A Song of Ice and Fire book series got to see what so many have been waiting sixty episodes for…. 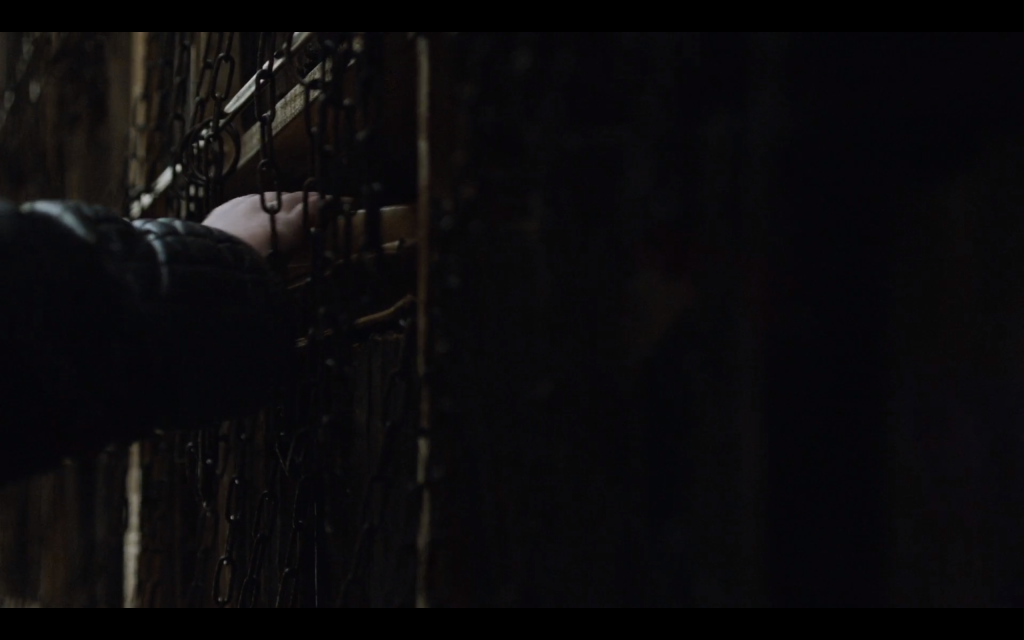 Sam in the stacks of the Citadel Library…touching books after so long.

A lot of books… 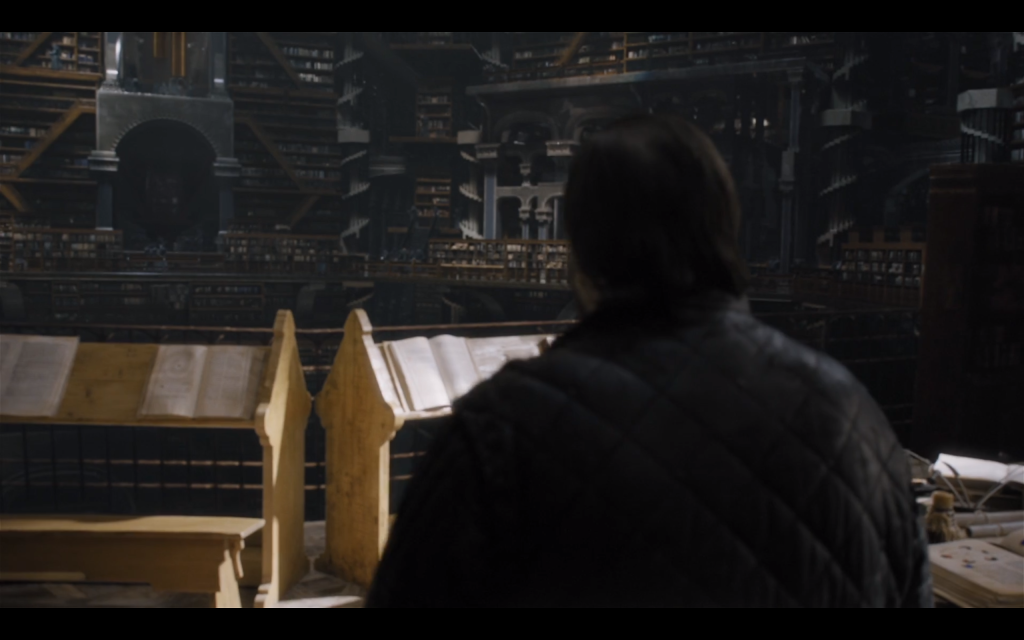 Sam in the Citadel Library getting that first look at the massive book . 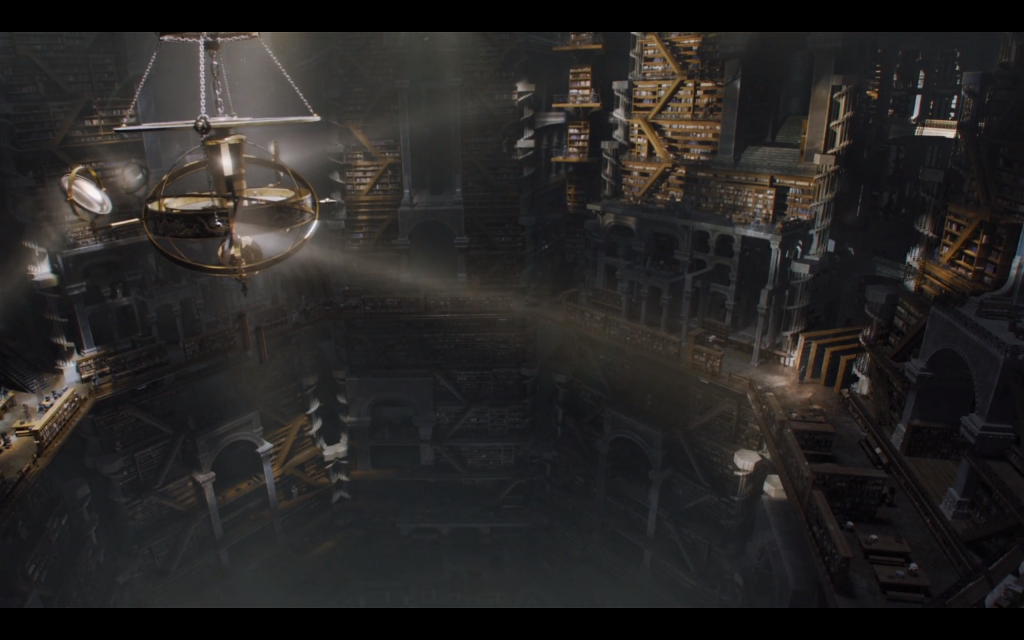 A full look at just how enormous that amazing library is at the Citadel in Game of Thrones.

We’re talking about the massive library in the Citadel, where Samwell Tarly—the lovable, loyal, and literary best friend and advisor to Jon Snow—finally arrived after departing the Wall to become the new maester for the Night’s Watch.

Okay, we were all thinking this, right? Sam was having a Belle moment from Beauty and the Beast…

Sam in the Citadel Library closely resembled bookish Belle from Beauty in the Beast.

I have often wondered about the lack of books on Game of Thrones. Sam’s presence at Castle Black was always a great way to sneak a few images of book porn in there. I knew books were important to some characters on the show—Tyrion, Shireen, and Sam, of course, to name a few bookish Westerosi—but apart from the library at Castle Black rarely did we get to see more than a few books at a time. To be fair, there’s always a lot going on in Westeros and Across the Narrow Sea…the rise of religious forces, dynastic clashes, White Walkers…yet I always felt like there could be more books.

And the season six finale delivered.

Watching the scene, my jaw dropped. I wanted to learn so much more about the Citadel Library, and I’m sure we’ll get to spend time there in the upcoming seventh season.

Here were three questions I have about the Citadel Library in Game of Thrones.

1. How do they catalog their books?

A nerdy question to be sure, but I couldn’t help but wondering…do they Dewey in the Citadel? Or do they have a cataloging system all their own? With a gigantic library like that, how do they keep all their books straight?

I’m curious as to what the call numbers look like…

Would DRAGONS – HISTORY be filed under 398 (Folklore)?

Would DOTHRAKI – LANGUAGE be categorized in the 400s (Language)?

And would BATTLE AT BLACKWATER BAY, THE – STRATEGIES fall under 355 (Military Science)?

Let me push my glasses up further on my nose and tug my cardigan a little tighter…I’m having a flash of library nerding out about the Citadel Library, and I think the temperature just rose a few degrees.

2. What are the circulation policies?

It looked like the Citadel Library was a mix between chained books and some that were more freely available. Can they be checked out of the library? Do you have to have a card? It would be tempting to check out all the books, but there might be a maximum you can borrow at once—and a holds limit, which I’m sure would hit the ceiling of almost immediately.

Another thing I have to wonder what the checkout policies are like. Do students and maesters have to fill out a card at the back of a book? Is there a due date stamp?

And what are the late fines?

I can only imagine the penalties for returning a book late…scalding dragon-fire burns, parading through the Citadel with someone shouting “Shame!”, and I’m sure the Boltons would have had some ideas…

3. Is there a card catalog?

If they have one, I want to see it.

You also have to wonder what their reference department is like. Just about everyone who is a maester is brainy, well-read, and an interdisciplinary nerd. So who is the crem de la crem? The reference librarian would have to know even more than the average maester and to understand how to connect that information together and find and retrieve it. Oh my gosh! Information seeking behavior in the Citadel Library. I want to study it.

I can’t wait to watch the reference interview for when Sam has a question he can’t answer.

The geeky librarian nerd within me was having a near tear-inducing moment during the scene in the season six finale when Sam goes to the Citadel Library.

So many of us felt the same way…if only someone looked at us the way Sam looked at books. 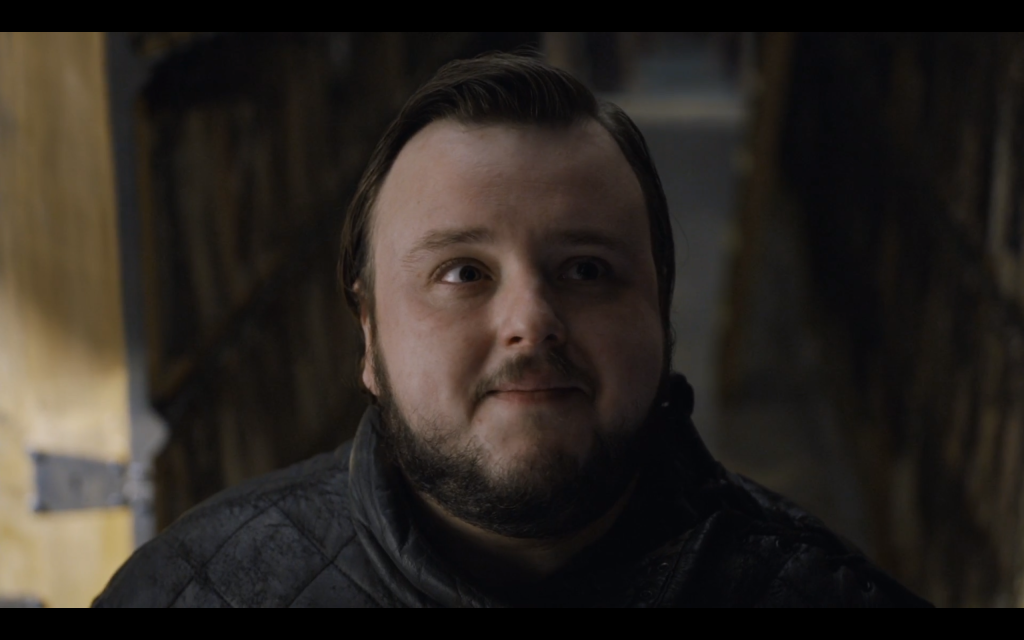 Sam breaks into a wide grin at the look of all those books in the citadel library. *swoon*