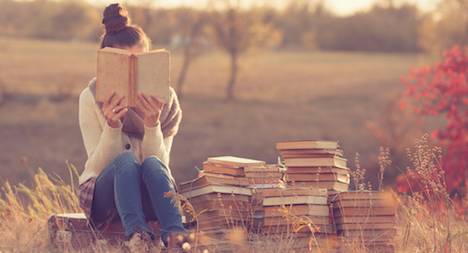 Toward the end of last December, Goodreads kindly sent me a fancy graphic email, a summary of my 2015 reads. The font for that total number was HUGE. And the number itself, shockingly small. Sixteen.

I was surprised. I had never used Goodreads to track totals, which didn’t interest me, and I had never counted at the end of a year. Because, why? I’m a slow reader, I admit that. Even so, that number seemed stinkin’ skimpy. I looked back to check, and sure enough, my average for each previous year was more than twice that.

I mean, 2015 was big, sure. I sent my youngest to college, and there was that lightning strike cancer ordeal. But, seriously. What happened? 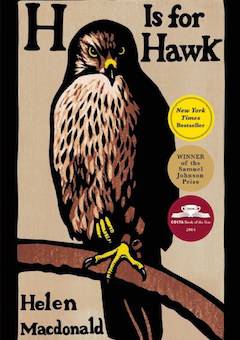 It took me two seconds to realize: H is for Hawk happened.

So here’s how it went down.

My favorite Sunday morning hangout is the aptly named café, Better Living Through Coffee. I often see a group of retired couples sharing a big table and lively conversation, highly educated hippies. I’ve overheard enough snippets to guess that one gentleman is a scientist.

I had just finished the last chapter of H is for Hawk when the scientist approached me. He apologized for interrupting, and said, “I saw your book—I’ve read so much about it! But I was sitting here trying to remember the name of the English falconer….”

“I think you mean T.H. White? The fella who wrote The Once and Future King?”

“Yes! That’s it! That’s the guy. I’ve been meaning to read Hawk. Reviews are just wonderful!”

And then I tried to say something coherent about how brilliant it is, but the words weren’t there.

He said, kindly, “Well, I could see you were engrossed.”

Which was polite. I was able to contain myself, no open ugly sobbing, but I was quietly weeping.

It was months before I could talk about that book—and then it was only to say, “Amazing!”

My strategy for dealing with the strange silent stillness that had settled over me was to buy copies of the book for everyone. Birthday? Christmas? Anniversary? No reason at all? BAM. Any excuse would do.

Imagine my surprise when some of friends just did not get into it at all. 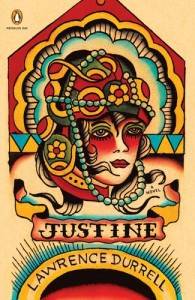 This had happened once before, with a different mind-blowing book. A couple years ago I picked up a copy of Justine, because it was 99 cents, the cover was pretty, and I recognized the author’s name—Lawrence Durrell is the brother of Gerry, who wrote the hysterical memoir, My Family and Other Animals. Also: The cover was pretty.

It was somehow both humiliating and exhilarating that I had to look up three words in the first dozen pages. And that was just the prologue.

“He is a pegamoid sloth of a man.” And: “Now tired men throw back the shutters of their balconies, and step into the pale hot light—etiolated flowers of afternoons spent in anguish….” And: “I found Melissa, washed up like a half-drowned bird on the dreary littorals of Alexandria, with her sex broken….”

I wondered whether it was worth the effort, but one day an elderly and elegantly dressed woman approached me when she saw what I was reading and said, “Oh, gosh, everyone was reading that back in the sixties.”

Heartening. So I plodded on. Soon enough, I was utterly entranced.

I later loaned my copy to a colleague, and when he asked what it was about, again, that mind-blown silence.

He returned it the next day: “I know you said there wasn’t much plot, but I think you under-emphasized that point. It’s basically 20th century poetry. And! He is a poet. I mean, it’s fine and all that, it just isn’t my bag.”

When I was younger, this disconnect would have disturbed me. With the people who can’t or don’t love the books I love, I might have tried the approach my son’s college buddy took with him: “You have to read this,” she said. “And if you hate it, LIE TO ME.”

Sometimes we read a book at exactly the right time in our lives, and it feels as if that genius should be universally commendable and significant. But as my older son used to tell me, often and gravely, when he was five, “Everybody is different, Mommy.”

My colleague who hated Justine digs T.C. Boyle, who doesn’t appeal to me. My friend, who tried to read Hawk and couldn’t, had lost her mother very young, and the death of a parent theme was too much for someone who only has time to read for ten minutes every evening before collapsing.

This is hard. That Goodreads count was a wakeup call. Hawk had stopped me in my tracks. When it finally sunk in, when I realized that I’d failed to get any traction on my reading after Hawk, when I realized I couldn’t form a single coherent thought about it, when I realized my peeps may or may not love it, suddenly it dawned on me. There was only one reasonable thing, only one right way to begin the new year. And that was to read it again.