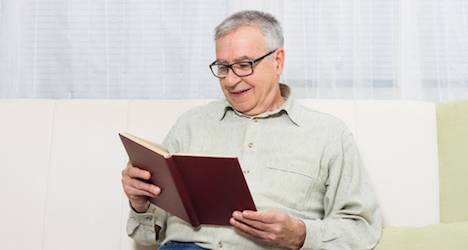 As long as I can remember, my dad hasn’t been a reader. He could spend hours watching TV, listening to the radio, or doing yard work, but even 15 minutes of magazine reading would have him snoring in his La-Z-boy. We often argued about my love of reading, which he variously considered unnatural, obsessive, harmful, or weird. However, after about a decade of gentle persuasion and persistently mailing him books, I’ve finally turned my dad into a reader! He has favorite authors and series. He asks for books for Christmas. He can read a thick paperback in only a few days. We exchange books. It’s magical.

If your father is also a reluctant reader and you’d like to help him discover the joys therein, try these four simple steps. They take dedication, commitment, and a good deal of thought, but they’re absolutely worth it.

Final word of advice: listen to your dad. If he says he doesn’t like something, don’t continue buying it for him. If he likes something that you don’t (see: Earl Pitts), buy it for him anyway. Giving presents and helping establish a reading relationship is all about what the other person wants and needs. Foisting your reading standards onto another person is a sure-fire way to make them even more reluctant. And, as we all know, reading is a gift. It broadens our horizons, connects us to new communities, strengthens our brains, and provides free therapy. Shouldn’t we do whatever we can to extend that gift to our dads?

So what about you, Rioters? Got any tips to add? Stories about reading with your dad? Share them in the comments below!