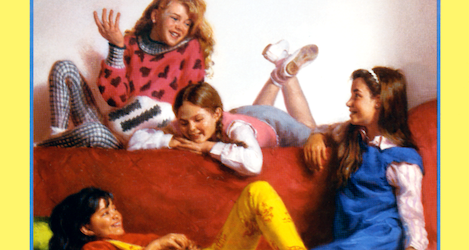 I recently read that Ann M. Martin is donating her literary papers to her alma mater, Smith College, and that outlines of later Baby-Sitters Club books will be in the college’s Mortimer Rare Book Room. As the lifelong BSC geek that I am, I immediately began dreaming about a trip out east to visit the library and see the papers. Then I was struck with an idea, perhaps even on the scale of one of Kristy’s great ideas: a BSC pilgrimage tour. A trip where I could visit the places where the baby-sitters have been, the real life places that inspired their fictional counterparts, and an attempt to find Stoneybrook, the wonderful fictional town in which the series takes place.

Sea City, the fictional seaside town where the Pikes went for a holiday every summer and is the setting of great books such as Boy Crazy Stacey, Mary Anne and Too Many Boys, and Sea City Here We Come! is inspired by a few different places on the Jersey Shore. If you wanted to experience Sea City, you might want to try Surf City, Avalon, or Stone Harbor.

Stoneybrook, Connecticut is the town the baby-sitters call home, where parents trust eleven-year-olds to look after their children, almost everything is within a short cycling distance, neighbours know each other and are friends, and is what I imagine the perfect small town in America to be. I love Stoneybrook. I know it’s not real, but that’s not going to stop me from trying to find it.

Stamford is the closest big city to Stoneybrook, so I must stop there. It’s where Jessi goes for her dance classes, so I feel that seeing a performance at Connecticut Ballet would be entirely appropriate.

Hartford is where Stacey once had a Mathletes competition, so I’d make a stop there too.

As for Stoneybrook itself, there are a few towns* that are possibilities: Westport, Darien, or New Canaan. These are all fairly affluent towns, and Stoneybrook seems to be a town that is on the higher end of the wealth scale. Watson Brewer lived in a mansion at the ‘rich’ end of town, but even in the not-rich part of town, the adults there worked in industries like law and finance. They all have trains to New York City, as Stoneybrook does. The populations are not particularly ethnically diverse, with over 90% of the population being white, and this is also in line with what we know about Stoneybrook. To be honest, on this pilgrimage tour I’d want to head to all three towns—I imagine I will find a little bit of Stoneybrook in all three.

So, would anyone like to join me on this tour? We could read the books as we travel around, and take a BSC book discussion group on the road!

*Many thanks to fellow Rioter Elizabeth Allen for her suggestions for towns that could be Stoneybrook.