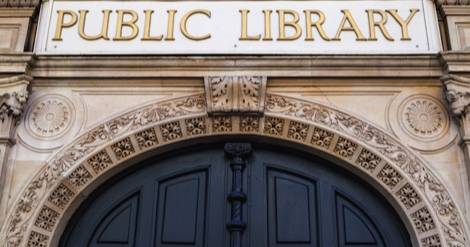 When you think about the places where people cry, there are the usual suspects: homes, hospitals, movie theaters, churches. But there is another place, one that can be magnificent or humble, a witness to daily struggles and momentous occasions that can also bring people to tears—the library. In this post, Katie MacBride and Jen Sherman discuss the libraries in which they’ve shed a tear or two.

JS: Libraries raised me. I spent most of my lunchtimes in primary school in the library, browsing or reading in the stacks, and sometimes listening to the recommendations of the school librarian, Mrs. Vincent. I thought her job was the coolest job in the world. It was in this humble school library that my love for reading (and the Baby-Sitters Club) began. On weekends, my parents took me to the local library, and being a kid in the library was even better than being a kid in a lolly shop. You see, I could have whatever I wanted in the library. I could read and borrow and book I wanted, for free. There was much more freedom in the library than there was at the bookshop, where the books had a price. Libraries were safe and welcoming places where I could hang out with my fictional friends.

KM: Libraries have always been a kind of sanctuary for me. When I was in elementary school, I would go to the library at recess, desperately hoping the librarian would have a new Ruth Chew book for me to devour (puns!!). Friends inquired why I wasn’t going out to play tetherball but I was strangely unashamed of my commitment to breaking from the rest of the group. The better choice between the two options was obvious: I just couldn’t figure out why the rest of my friends didn’t see it.

JS: There are two libraries in which I have cried. One was San Diego Public Library because it’s the library where I was married, and I actually didn’t cry until the reception when my in-laws (my new husband’s parents, brother and sister) surprised us with a choreographed lip-sync and dance. It was epic. And I cried.

KM: The first time I cried in a library, it wasn’t because I was overwhelmed by its beauty. It wasn’t because I felt strongly about that particular library or what it represented. It was because my world was falling apart and the school library was the only place I felt safe. I was 16 and it was my high school library. Things were tumultuous at home, decisions were being made that would affect my family’s future. By the time I got home that day, decisions would be made that would shape the rest of my life. There was nothing to do but wait. So, that’s what I did. I climbed up the stairs to the library with my heavy-ass-full-of-textbooks backpack, slipped quietly through the rows of books and to a study carrell. It was first period I was the only one in the room. I found a row all the way in the back and climbed under the table. I slid my backpack in front of my face, blocking my view of the row in front of me. Then, and only then, I cried.

JS: The other library that brought me to almost-tears was not because it was the site of a somewhat momentous life event but because of the library itself. Seattle Public Library is a library that I had been reading about for years, and it was the catalyst for my first trip to the US.

I started my PhD on public libraries back in 2012, and one of the books that helped with my proposal and eventual dissertation was Shannon Mattern’s The New Downtown Library.The Seattle Public Library graces the cover of Mattern’s book and is one of the main case study libraries that Mattern writes about. In 2014, I received funding from my university to attend a conference in London. I managed to convince the university that Seattle and New York were on the way to London from Sydney (it technically is, if you go the long way…) and that visiting Seattle to see that library and going to New York to meet Mattern would be vital to my research. And so, my first ever trip to America was to Seattle.

I remember turning left on 4th Avenue and seeing, in the distance, a large, angular building. Its steel and glass reflected the morning’s light. I was still a block away but at that moment I knew. This was the reason I came to America.

I entered the library at its 4th Avenue entrance, into its ‘living room’ level. I paused, took a breath, and looked around. It was like having a religious experience. When I spoke to the librarian who was stationed at the information desk about why I was there, I almost cried. No building had ever or have since had such a profound effect on me—not the incredible Library of Congress, or amazing national and state libraries I’ve had the privilege of visiting over the past few years, or even the library where my wedding was held. Seattle’s downtown library was the library I had been reading about and imagining for years, that had inspired my research, and the catalyst for a new way of seeing libraries.

KM: Throughout my time as a librarian, I’ve library-cried countless times. I cried when I saw teens from my creative writing class stand up and perform their original works of poetry in front of 200+ adults. I’ve cried because a patron was rude to me at the end of a long day when a long list of other patrons had been rude and I was just. so. tired. I can’t actually think of a time in the past eight years or so that I’ve cried outside of my home or a library. Perhaps this is just because I’ve spent so much of my time in libraries but I think it’s something else, as well. It’s that I love them. They are my church and sometimes, even when I am there as a professional, I can’t help the vulnerability and passion that libraries make me feel.

The most recent time I cried in a library was in October, when I walked into the Library of Congress. It wasn’t a full-on ugly cry, it was just the swell of emotion that arises when you see firsthand something that has held enormous symbolic significance in your life. I was standing in the lobby of a shrine to so many of the things that I built my life on: reading, writing, education, and most of all…libraries.