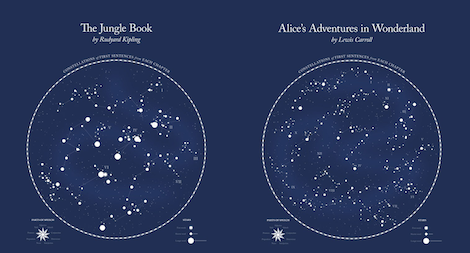 Today’s Critical Linking is sponsored by It’s All Absolutely Fine by Ruby Elliot.*

First, Rougeux mapped each part of speech to a point on a compass. A line that connects to an adjective, for example, points due north, while one that extends toward a prepositions does so in a southwesterly direction. Then he classified words from the opening lines of classic novels.

Lindbergh, despite his Nazi sympathies and racist proclivities, was a great aviation hero who had displayed tremendous physical courage and aeronautical genius in crossing the Atlantic in 1927. He had character and he had substance and, along with Henry Ford, was, worldwide, the most famous American of his day. Trump is just a con artist.

Philip Roth on comparisons between his book The Plot Against America and Donald Trump.

The Purloining of Prince Oleomargarine is based on handwritten notes by Twain of a story told to his young daughters one night in Paris in 1879. In the story, a young boy who can talk to animals recruits some creatures to help him save a kidnapped prince.

This isn’t even a whole found story, it’s found notes about a story that hasn’t been found.

*The author’s name was previously misspelled and has been corrected.